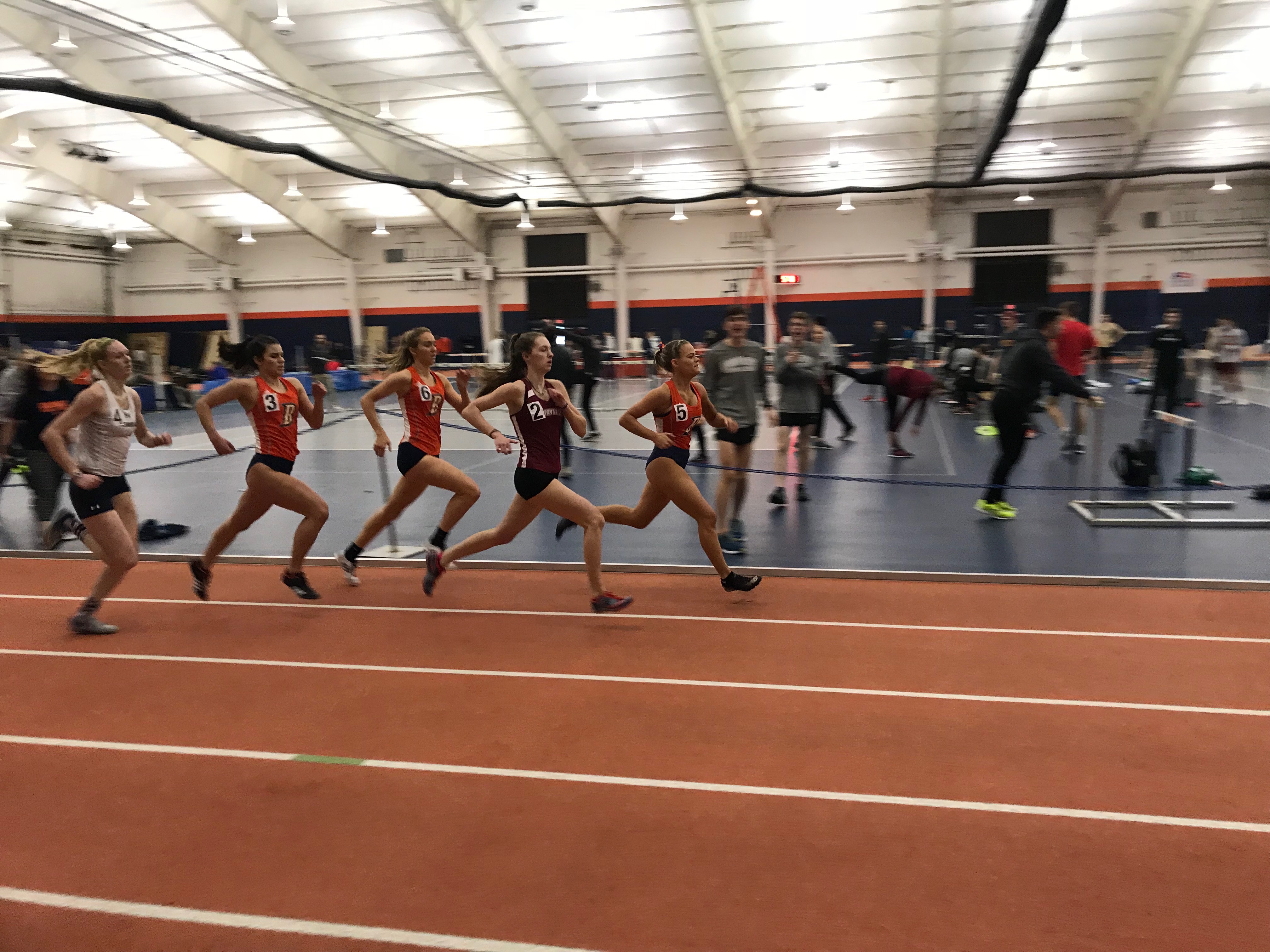 Freshman Hannah McGlynn finished less than a second out of first in the 500 meter dash. (Photo courtesy of Kelsie McGlynn ’21)

This past weekend the Lafayette track and field team traveled to Lewisburg, Pa., to compete in the Bison Open & Multi meet hosted by Bucknell. Both the men’s and women’s teams found success in different events. Junior Tyler Hubeny was the star of the weekend, winning the Heptathlon with 4,784 points and setting a new school record in the process.

“It means a great deal to me to get the school record. It is something that I have looked at and wanted to beat since I was a freshman,” Hubeny said. “The previous record holder, Kyle Clayton, was an incredible athlete and to put my name up there means so much to me.”

The Leopards brought plenty of strength to the table, as sophomore Harrison Greenhill had an impressive performance in the shot put with a toss of 16.08 meters, good for first place in the event. Fellow sophomore Sam Fishbein recorded a throw of 14.48 meters to finish seventh in the event, and won the weight throw with an impressive toss of 17.95 meters.

On the women’s side, freshman Jillian Warabak set a personal best while winning the 60-meter hurdles event with a time of 8.97 seconds, the third fastest time in the Lafayette record books and fourth fastest in the Patriot League this season. For her efforts, Warabak was honored with her second straight Patriot League Female Rookie of the Week award.

“Going into the [meet] there were a lot of teams I hadn’t run against yet,” Warabak said. “I was really nervous, I just ended up thinking, ‘I have to run as fast as I can,’ and I did exactly that.”

The track and field team spent the majority of their interim break training and an impressive showing at the Bison Open was a great demonstration of the effort the team has put into their conditioning and preparation.

“We generally practiced about twice a day and had meets every weekend. We spend a lot of time not just practicing our individual events but doing all the recovery necessary to make sure we are healthy to compete for the following semester,” Hubeny said. “Interim can be a bit intense because practice might be a bit longer and harder than during the school year but it is also nice to be able to dedicate so much time to our sport.”

With all of the effort the team has put into practice, they feel like they have improved and grown closer as a team.

“Compared to high school the amount of training I’ve done has quadrupled. Recently I’ve been hitting personal record after personal record,” said Warabak. “Everybody puts in so much work, and I know there’s been some great improvement. It’s nice to see everyone be so excited and doing so well.”

“We have the Patriot League Championship meet coming up in a few weeks so the team is preparing for that. A lot of that is just resting so that we are fully ready to go by the championship,” Hubeny added. “I would love for the team to move up a spot in the league championships as we were only a few points behind Lehigh last year.”

This weekend the Leopards travel to Staten Island, N.Y. to take part in the Villanova Invite on Saturday, Feb. 2.