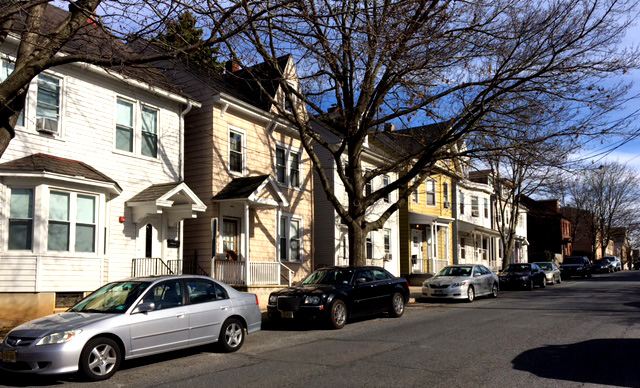 Some houses on McCartney Street, which will be the site of a new mixed-use dorm, will be demolished in mid-February. (Photo by Kathryn Kelly ’19)

Walking past the site for the college’s new four-story McCartney Street dorm in the coming weeks, students may notice the presence of fences as the area’s transformation commences, and the family-style homes begin to disappear.

In early December, the college received permission from the Easton Planning Commission to begin the first part of its expansion plan, immediately following the settlement of a lawsuit over zoning laws put in place for Lafayette’s expansion between the city of Easton and four College Hill residents, a matter into which the college intervened. The college reached an agreement with the residents to end the lawsuit.

Construction is scheduled to begin in mid-February, at which point the houses on McCartney Street will be demolished, according to Vice President of Finance and Administration Roger Demareski.

As construction on the project looms, the faculty is set to be more focused in their involvement in oversight of the expansion plan. In mid-November, biology professor Nancy Waters proposed a motion to “temporarily suspend the student body expansion” until the college could address certain concerns of the faculty including course availability, advising pressures and counseling service availability. The motion also proposed the suspension so the faculty could have time to form a committee specific to expansion that would make recommendations to the administration annually during the 10-year plan. The suspension of expansion did not pass, but the committee creation did.

Clerk of the Faculty Robert Root wrote in an email that a motion for a special election will be presented at next week’s faculty meeting to select the ad hoc committee members.

The committee will submit an annual report on the expansion. The Faculty Academic Policy committee was formerly responsible for these reports since the the faculty voted to approve expansion in 2016, but having a committee specifically to focus on expansion will allow a report “in greater detail,” Byerly said, to help the college identify both successes and challenges. Waters added that the Faculty Academic Policy is already “among the most overtaxed committees of the faculty,” and thus, a specific committee on expansion will allow it to be more focused.

With the creation of the committee by the faculty, Byerly said that it “provided an opening to make sure the community is well-informed” of the expansion plan. She said that in order to make sure the community is more informed on expansion, the college will be holding separate open meetings for students and faculty and staff. The student meeting date has not been set yet as of Wednesday night. The college’s goal is to be “more proactive” in communicating with the campus about the plans, she added.

In terms of beginning construction on the new McCartney residence hall, Demareski stated that there are several objectives which must be accomplished before demolition can happen. First, although there is no evidence of any rodents present, a rodent control program must be enacted, as destroying edifices typically disperses rodents into the surrounding area.

Second, any hazardous materials, such as asbestos, must be removed from the homes. Third, an architectural salvage firm hired by the college is going to test the quality of the materials in the structures to determine if any can be preserved. Finally, all the utilities for the buildings need to be shut off.

In terms of any possible inconveniences students may face as the project kicks off, Demareski said, “We’ll put a fence around the site, we’ll close the sidewalk around the site, and we’ll direct people to cross the street…but all the work will be contained within the fence.”

Demareski also noted that sections of McCartney Street may be closed during the actual demolition, but this “shouldn’t take long.” There will not be any danger to the surrounding area as water will be used to control the dust and no hazardous materials will be used, Demareski added. Additionally, all parking spots along the block under construction will be closed off for safety reasons. This includes parking along those sides of McCartney Street, March Street and High Street.

As part of the settlement of the lawsuit fitered by the Easton residents, “the College has agreed to move the house at 517 Clinton Ter., which was designed by William Michler in the early 1900’s,” President Alison Byerly said in a campus-wide email in November.

Demareski elaborated that the actual moving of the house “doesn’t happen for a few more years,” at which point a private company that specializes in relocating old homes will become involved.

The college will also auction off some of the items and “architecturally important elements” from the house, as per the agreement between the college and four residents, and then donate the money to the Easton Area Community Center, a non-profit “dedicated to providing a safe haven for educational and athletic activities for children between the ages of five and eighteen years of age,” according to their website.

The residence hall is phase one of the college’s multi-part expansion plan. The building is scheduled to finish before the fall 2020 semester.