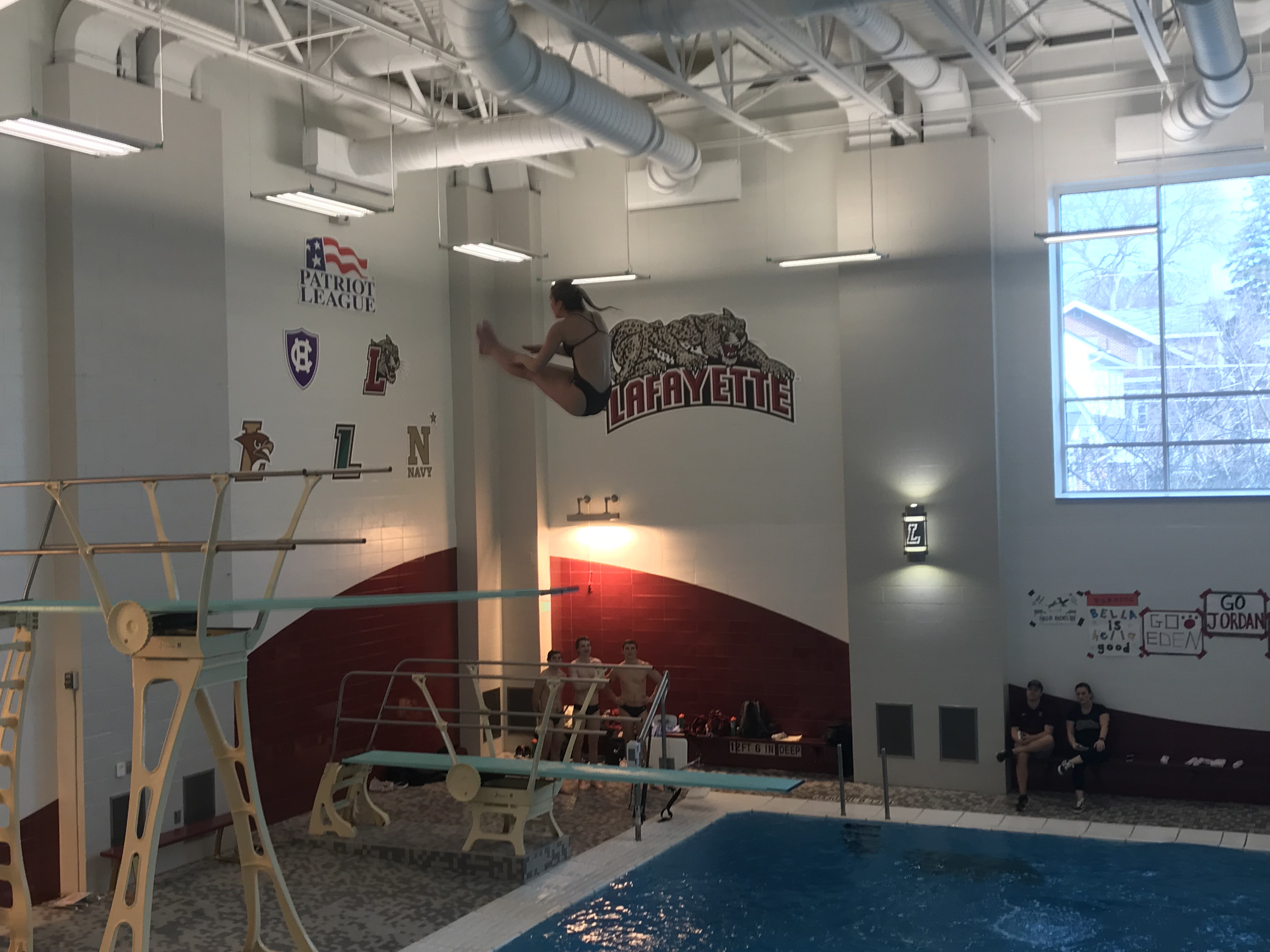 The team will visit Bucknell for their final meet before traveling back to Lewisburg, Pa., for the Patriot League Championships. (Photo by Andrew Hollander ’21)

The Lafayette swimming and diving team competed in two meets last weekend, hosting both Rider and Colgate in their final two home contests of the season.  During Saturday’s meet against Ryder, both the men’s and women’s teams fell short despite several strong individual performances.

The men won two events, the first coming from senior Kyle Doherty, who won the 200-yard freestyle comfortably with a time of 1:50.46, over four seconds faster than the second place finisher. The other win for the men’s team came courtesy of freshman Naoki Nomura, who swam the 100-yard freestyle in 53.95, narrowly beating the second place finisher by just 0.3 seconds.

On the women’s side, senior Faye Melekos had a second place finish in the 100-yard butterfly, less than a second out of first place with a time of 1:00.10.

Melekos said she was undeterred by the loss, explaining how the team often struggles with competitiveness due to the lack of scholarship aid from the school.

“Lafayette is one of the only teams that is non-scholarship for swimming. Our expectations for a meet are usually to do our best, hold our own, and get [personal records].”

In addition to Melekos’ performance, other highlights on the afternoon included sophomore Mary Zimmerman’s second place finish in the 200-yard freestyle and freshman Samantha Talecki’s win in the 100-yard freestyle with a time of 56.59.

On Sunday, the Leopards faced a depleted Colgate squad, as some members of the men’s team were not permitted to swim in the Sunday meet due to disciplinary reasons, according to members of the Lafayette team, which led to a close outcome. The men won with a final score of 152-144, while the women fell short, 181-107. Sunday’s meet was Senior Day and swimmers on the team described the event as action-packed, with the meet coming down to the last relay.

Freshman Michael Gorgon won both the 100- and 200-yard breaststroke events, sophomore Tanner McFarland emerged victorious in the 100- and 200-yard butterfly, while Doherty won the 50- and 100-yard freestyle sprints. The formidable foursome of Nomura, Doherty, Gorgon, and McFarland kicked off the afternoon in style with a win in the 200-yard medley relay. The men won nine of the sixteen races on the afternoon.

Head coach James Dailey said that the performances were more focused than Saturday’s against Rider, and praised the senior swimmers for their commitment to the swim program.

“This meet was an amazing way for our seniors to finish their dual meet careers. It is going to be a hard day saying goodbye for the final time. They have given quite a bit to our program and the school.”

The women won three races on Sunday against Colgate, highlighted by Melekos’ win in the 100-yard backstroke and the Leopards’ domination in the 50-yard freestyle, taking home the top three places in the event led by freshman Emily Wilson who finished in 25.04. Senior Julia Hall, junior Anne Marie Mozrall, Wilson and Melekos won the 200-yard freestyle relay with a time of 1:42.00.

Melekos, one of the departing seniors, said she believes that the future of the team is in good hands.

“The girls’ team has worked really hard this entire year. We have 19 freshman girls and they make up the majority of the team. They integrated themselves into the team very well and know who they are as individuals. I’m happy I got to spend my last year with all 19 of them.”

“As far as the seniors go, our numbers dwindled a lot. There were 10 of us my freshman year and now there are 5. We call ourselves the final five. Everyone is getting ready to close this chapter of their life,” Melekos added.

The team will now prepare for the stretch run of the season, with Patriot League Championships looming in the next two weeks.

The Leopards will be back in the pool on Saturday, Feb. 2 at the Bucknell Invitational.