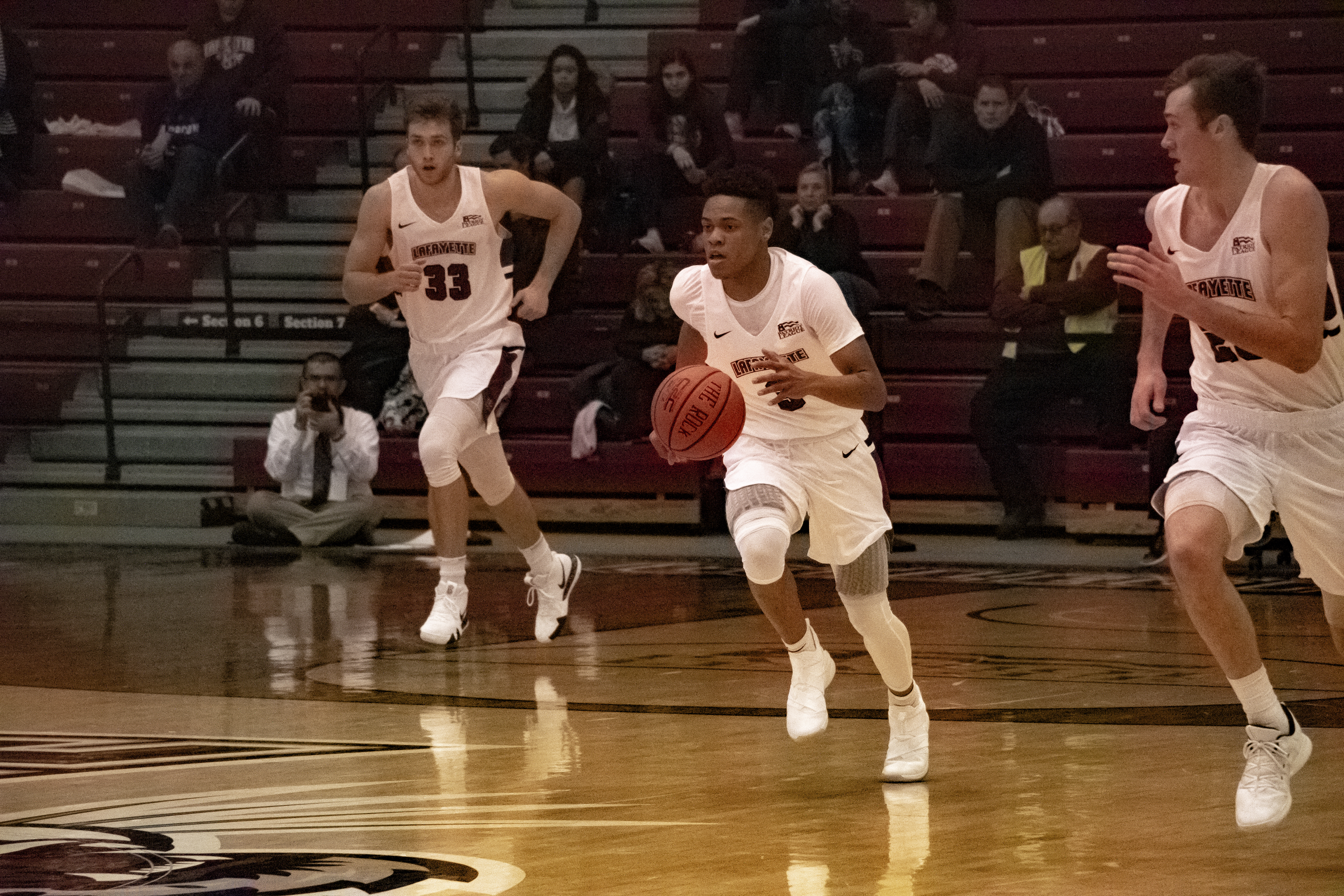 Freshman guard Isaac Suffren tallied a career-high 16 points in loss to Lehigh. (Photo by Jess Furtado ’19)
The Lafayette men’s basketball team suffered a 69-63 defeat to Army West Point last Saturday before losing to rival Lehigh in overtime on Wednesday during the “team takeover day,” where both teams wore customized jerseys with player nicknames. The loss moves the Leopards to 6-14 overall and 3-6 in Patriot League play.
The Lehigh game was a tale of two hot offenses, as the Mountain Hawks shot 54 percent from the field and 39 percent from three point range while Lafayette shot 50 percent from the field and a scorching 43 percent from deep. The teams traded leads in the fourth quarter before Petrie hit a layup and two midrange shots in the final three minutes to keep the game close and send the contest to overtime.
The Mountain Hawks dominated the extra frame, outscoring Lafayette 18-11.
Four Leopards scored in double figures, led by junior forward Lukas “LJ” Jarrett’s 17 points, tying his career-high, to go along with five rebounds, four assists, three blocks, and a steal. Freshman guard Isaac “Ice” Suffren tallied a career-high 16 points and had a pair of steals, and sophomore guard Justin “Jaws” Jaworski and sophomore guard Alex “AP” Petrie recorded 15 and 12 points respectively.
In the Army game, a late surge by the Black Knights negated a hot shooting night from three of Lafayette’s top guards. The Leopards led by 12 with over 16 minutes left in the second half but were unable to score the ball efficiently or stop Army’s offense, as the Black Knights ended a game on a 33 to 15 run.
There were flashes of an improved Lafayette offense against a solid Army opponent, including when the team started the game with a 12-7 lead after about six minutes of action. The Leopard attack featured strong performances from three sophomore guards, led by Petrie’s 20 points, Jaworski’s 15 points and six rebounds, and sophomore guard E.J. “E Money” Stephens’ 10 points. After a lack of success in the previous few games, Stephens talked about having all three of these guards playing well at the same time.
“We all like each other off the court and we are all really good friends, so I think that really contributes to us wanting to see each other succeed,” Stephens said. “We have no problem passing the ball to each other.”
The potential of this group of sophomores was well-documented during last year’s Patriot League play, but some shooting inconsistencies have hampered Lafayette’s ability to pull out some much-needed wins.
“I think we just got too comfortable with our lead. We started taking quick shots early in the shot clock, which led to them getting buckets in transition, which they are really good at,” Stephens added. “I think our defensive intensity went down as well. So I think those are the two biggest reasons our lead went away.”
Stephens emphasized the importance of focus throughout the rest of conference play. This concentration is even more important when you play each team twice because of the opportunity to potentially win rematch games.
The team continues their home stand with a game against Bucknell at 2 p.m. on Saturday, Feb. 2.