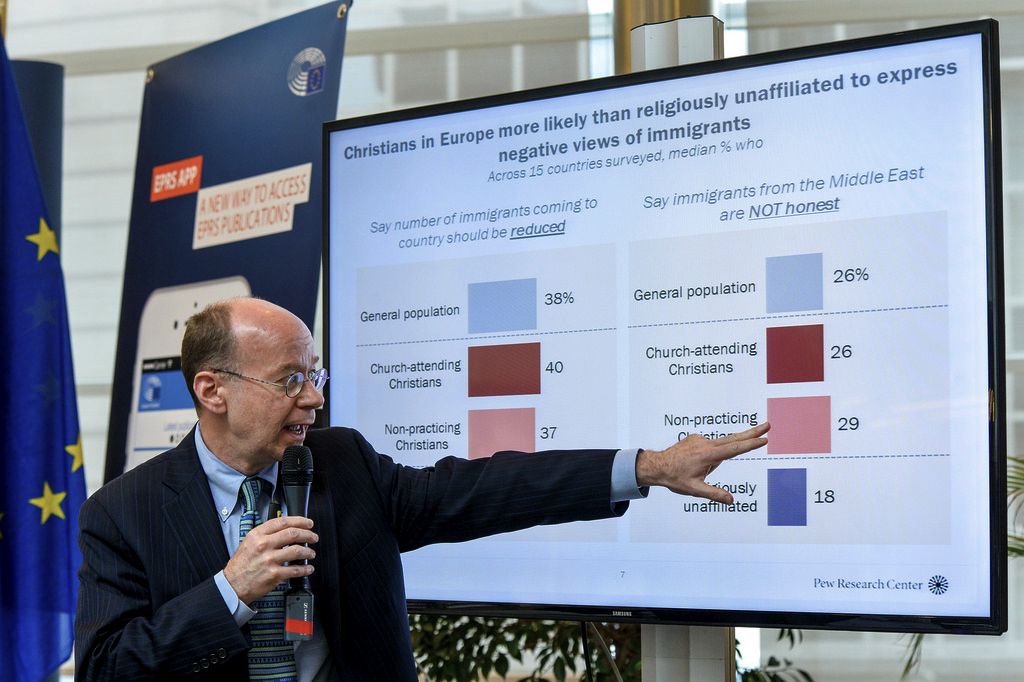 Alan Cooperman, Director of the Religious Center at Pew, will visit the college in March. (Photo courtesy of Flickr)

Director of Religion Research at the Pew Research Center Alan Cooperman will be visiting the college in March next semester, an event put on by the Lafayette Symposium. This event, to be held on March 6, will be the first from the symposium since last year’s debate between Brexit architect Nigel Farage and former President of Mexico Vicente Fox.

Formerly a “national reporter and editor at The Washington Post and a foreign correspondent for the Associated Press and U.S. News & World Report,” Cooperman is an “expert on religion’s role in U.S. politics,” according to his Pew biography. Provost Abu Rizvi, chair of the Lafayette Symposium committee, said that the topic of Cooperman’s talk is undetermined as of Wednesday afternoon.

The Lafayette Symposium committee formed at the start of this semester, with students and faculty serving on it, and its function is to recommend speakers to Byerly’s office to bring to campus. Byerly’s office, in the name of the symposium, co-sponsored a debate between Farage and Fox with the Steamboat Institute last semester. Before that, Byerly brought two speakers to discuss free speech on college campuses earlier in the spring 2018 semester.

The committee broke off into small groups to discuss particular themes, but came together afterwards to discuss how to proceed. The first recommendation they made to Byerly’s office was to have a year-long series of speakers revolving around one theme. Since that wasn’t possible for this year with half the year having progressed, they decided to schedule individual speakers instead.

They recommended five speakers to Byerly’s office to possibly bring to the college, but were not able to schedule any for this semester due to short notice. Rizvi declined to reveal the names of the other speakers since they have not been able to schedule them to come to campus yet, but possibly will do so in the future. Cooperman was the only one out of the five they were able to lock down for next semester.

Committee member Connor Burwell ’19 wrote in an email that he was “really satisfied” with how the committee functioned this semester, and that Cooperman will be able to “share insightful and thought provoking findings about religion in the United States.”

“My main concern when the [s]ymposium was created was that it would be another Mill Series, but I think we’ve successfully stayed far clear of that,” he wrote. “I don’t believe that Cooperman’s expertise lends itself to the promotion of hatred or bigotry on our campus, nor do I think it threatens the validity of any Lafayette student’s existence.”

Burwell said that he did not want the symposium to provide a platform to views that actively harm, threaten or marginalize students of color on campus under the guise of “ideological diversity.” “Student activism on campus last year (led by students of color) showed convincingly that the Mill Series did just this, and it’s something I wanted to help prevent from happening again with the Symposium,” he wrote.

Some members of the campus community, including students, faculty and alumni, criticized the college last semester for bringing Nigel Farage to campus, saying that he demonstrated bigoted views during his career. Student groups including Hillel and the Muslim Student Association wrote an op-ed describing why they opposed Farage’s visit.

Melissa Starace, Assistant to the President for Board and Community Relations, declined to reveal the cost of Cooperman’s visit.

“Out of respect for the speakers, fees are typically not disclosed. Some contracts will state that that fees are not to be disclosed. It’s a common practice when working with speakers and speaker bureaus,” Starace wrote in an email.