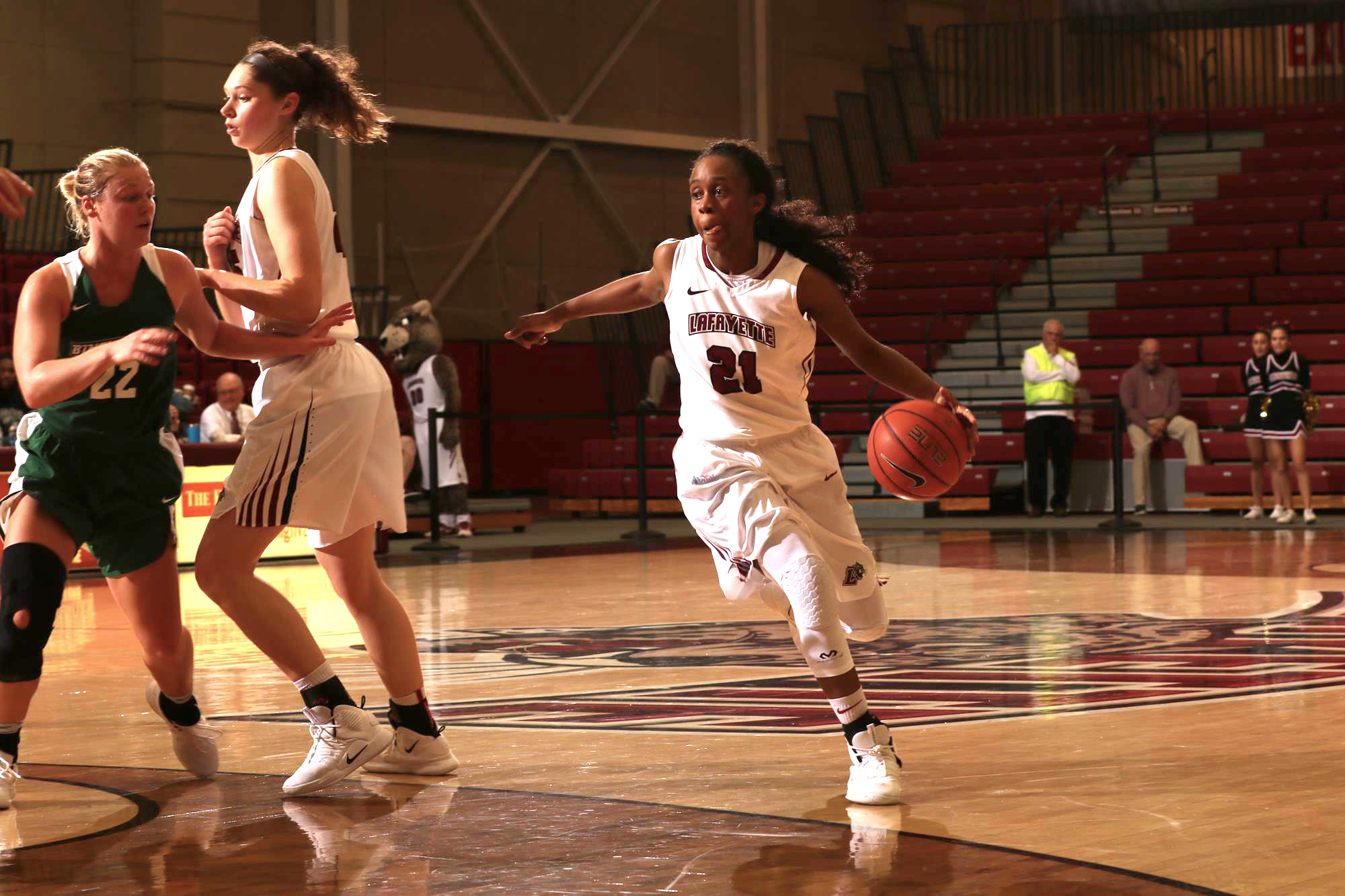 Sophomore guard Olivia Martino scored the winning basket and had a career-high in points in the win over Albany. (Photo courtesy of Athletic Communications)

Last Saturday, the Lafayette women’s basketball team overcame a 13-point, fourth quarter deficit to defeat the University of Albany in double overtime by a score of 67-66. Then, on Tuesday, the Leopards traveled to Manhattan College where they fell to the Jaspers by a score of 60-49.

The victory over Albany brought Lafayette to a record of 4-3, breaking their three-game losing streak. A huge fourth quarter by the Leopards saw the team outscore the Great Danes 19-8, with sophomore guard Olivia Martino’s layup in transition tying the game with one second remaining to send the game into overtime.

Lafayette opened the first overtime period on a 6-0 run before Albany closed the frame on their own 6-0 run to force double overtime. Martino, sophomore guard Drew Freeland, and senior guard Alex Cantwell each had a bucket during the offensive surge.

In the second overtime, Lafayette outscored Albany 8-7, backed by Martino’s push shot, Freeland’s runner, and a pair of free throws by Cantwell. The game-winning bucket came on a jump shot by Martino with 18 seconds remaining.

“We learned how to fight. We learned how to continue to fight and how to persevere through adversity,” Martino said. “It helps build our team when you go through times like that moving forward.”

Martino emphasized the pressure of late-game situations as something the team will grow from as they continue their season.

“Late in the game, we did well showing an urgency to score and to make sure to know the time situation, game situation, and the clock,” Martino added. “Something that we can go into late game situations and become better at is knowing what to do when you don’t know what to do in a situation. You need to pick up on it quick and execute.”

Not only did Martino hit the game-winning shot on Saturday, but she also finished the game with a career-high 19 points on 8-16 shooting from the field, to go along with three rebounds and two steals.

On Tuesday, Martino again led the Leopards in scoring, totaling 17 points from just 9 shots from the field. She also finished with a perfect 9-9 on free throws. Despite Martino’s strong performance, the offense as a whole struggled as the team committed a season-high 24 turnovers.

“I think our loss fell on preparation and execution,” Martino said. “Obviously, if you’re not prepared the right way then it’s going to be hard to try and execute on the spot.”

The Leopards went 0-7 from beyond the three-point line, failing to make a single deep ball for the first time in three years.

“We need to continue to stay in the gym, but we need to also find different ways to score. We cannot live and die by the three,” Martino added.

Overall the Leopards shot a lowly 32.6% from the field, while Manhattan went 7-12 from behind the three-point line. The loss to Manhattan adds insult to injury due to their 1-5 record entering the game, including a loss to Albany.

Lafayette will look to rebound against Monmouth this Saturday at Kirby Sports Center. The 2 o’clock tip-off will be against a Monmouth team that is 3-4 this year, with two losses to Patriot League members Bucknell and Lehigh.