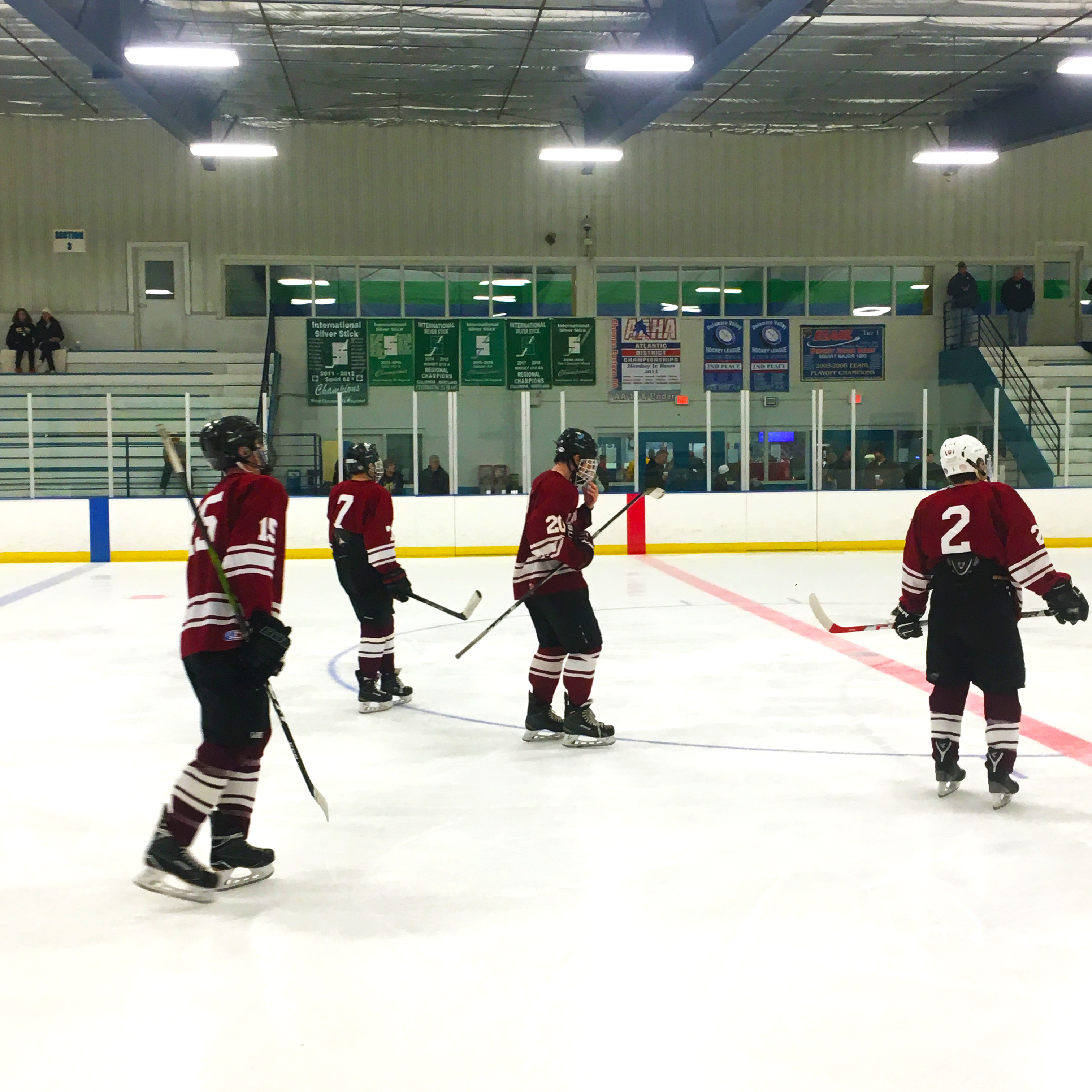 This past weekend, the men’s Ice Hockey club traveled to Penn State University, where they won 8-5. Lafayette’s record is now 3-4 as they head into their final two games of the semester.

This season, the team has been working hard to acclimate their freshmen players, and improve as a whole.

“We practice two nights a week at the Steel Ice Center, and sometimes we’ll have workouts once a week,” senior defender Ted Grandbois said. “As the season has been picking up and we’ve been trying more to get wins, we started changing out training strategies. So now we’re lifting once a week.”

According to Grandbois, the team focuses on practicing power plays, breakouts and transitions. They spend a lot of their practice playing in small games to work on playing more aggressively and battling for the puck.

“Early in the season, we came up short in a couple games that we could have easily won,” Grandbois said. “The teams we’ve been playing this year have been a lot better, and we also have a lot of youth on the team that isn’t used to battling back as much. As we’ve continued since our Lehigh game, we’ve seen a change in their game that is really exciting to see.”

In their win over PSU, Lafayette was able to get a quick offensive start, with four goals in the first period. The team held a lead through the entire game, not giving PSU a shot at a comeback.

“I think that was one of best offensive performances,” Grandbois said. “We moved the puck really well, a lot of guys were filling lanes and making creative plays. We took advantage of our speed and they just couldn’t keep up with us.”

According to Grandbois, PSU began to get in the players’ head towards the end of the game, taking away some of Lafayette’s focus.

“Towards the end, staying focused was a challenge,” Grandbois said. “That team was pretty chippy, and they were chirping stuff and throwing body a lot. We got kind of caught up with that in the end and that’s how they scored their last three goals. It should have been an 8-1 blowout, but we just got sloppy towards the end.”

This weekend, Lafayette will play Bloomsburg University on Saturday and La Salle University on Sunday. According to Grandbois, the team wants to head into each game with a focus on winning.

“When it comes to club hockey in college, you never know who you’re going to get for any given game,” Grandbois said. “In general, we try to go into it with energy like we’re playing Lehigh because they’re the best team we’ll play this year. Nothing is really changing for these games because we haven’t seen them play this year. We know that Bloomsburg is really undisciplined and they love to hit after the whistle and trash talk. We want to focus on staying out of that and scoring goals to win.”

The team has been working on playing games with intensity and energy from start to finish. In Grandbois’ opinion, the team’s biggest challenges are their lack of experience and the ability to play at the same level for the whole game.

“In the beginning of the season, we would have a good first period, bad second period and then average third period,” Grandbois said. “Lately, we’ve been having a good first period, decent second and a really strong last period. We are working towards playing strongly throughout, with high energy the whole game.”

The team’s focus for the rest of the season is to improve their record and make it into the conference playoffs in February.

“Right now, we’ve put ourselves in a little bit of a hole with our start to the season,” Grandbois said. “We’re focusing on winning every game in front of us to get a spot in the playoffs. If we can use the momentum and confidence from last game, moving forward we should be scoring more goals and getting more wins.”

Grandbois is confident that his team will make it to the playoffs, and thinks his team has a good shot at winning the championship for the second consecutive year.

“We did it once, we should be able to do it again. We’re in a more competitive league this year, but we also have a better team than our championship team last year in my opinion.”