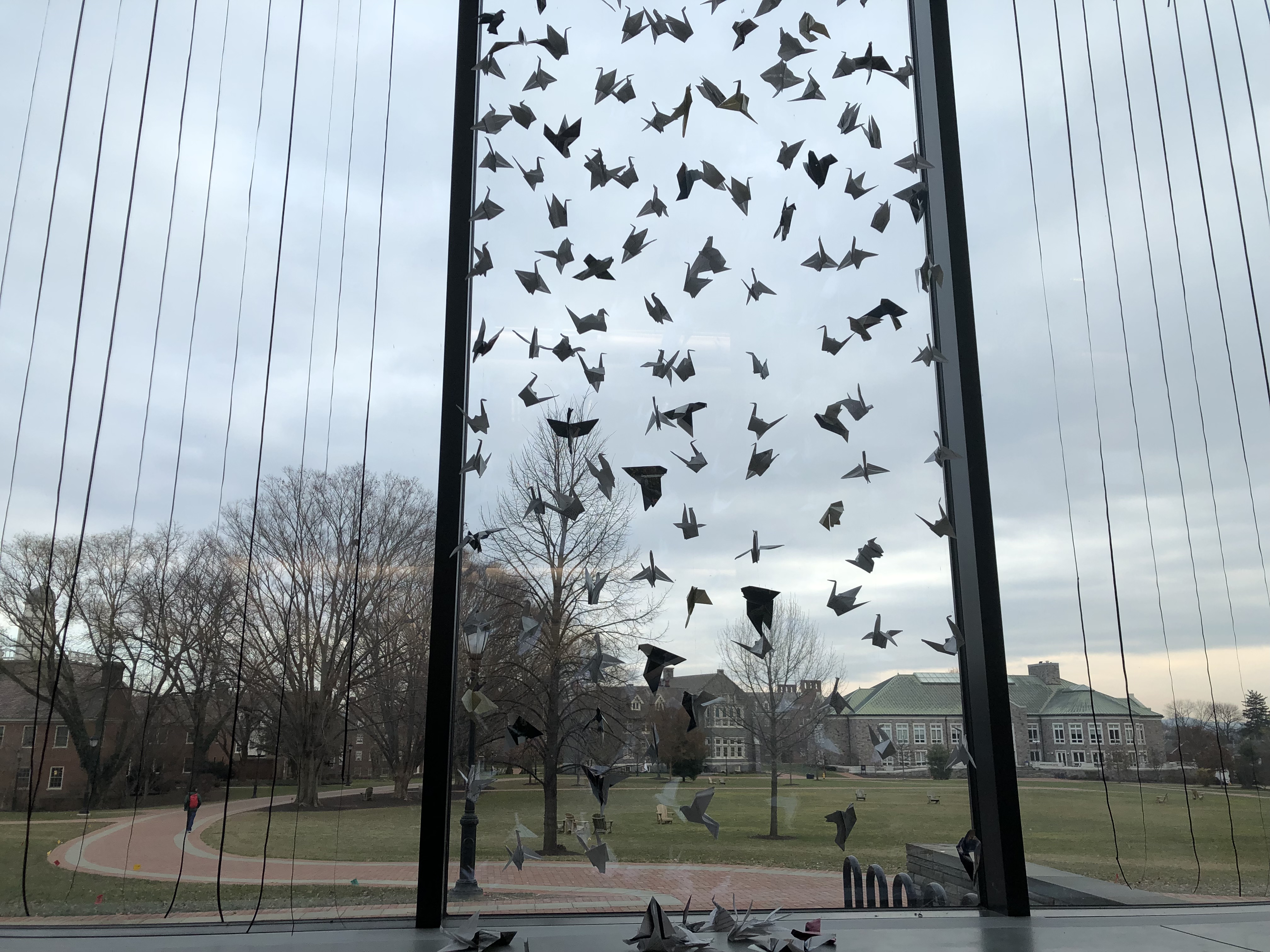 150 paper cranes have been installed in Skillman Library to represent the number of birds that have died from colliding with buildings. (Photo by Morgan Sturm ’19)

About 150 to 180 birds have collided with buildings on campus with two story windows, such as Hugel, Skillman, and Kirby Sports Center, according to reports started in 2012 by biology professor Mike Butler and engineering professor David Brandes.

42 to 57 of these collisions happened at Skillman Library alone.

Such birds include American Robins, Hummingbirds, Mourning doves, Walblers, Catbirds and much more.  Of these birds, “hummingbirds are the most frequently killed species,” according to Brandes’ website.

Kim Schubert ’20, who has dedicated much of her time at the college to the cause, installed 150 paper cranes by the two-story window in Skillman Library to represent the 150 deaths reported.

Additionally “BirdSavers,” which are vertical strings meant to prevent birds from colliding, have been placed against the windows at Skillman Library, Acopian, Hugel and Kirby Sports Center between 2015 and 2016.

According to American Bird Conservancy, “up to a billion birds die in collisions with glass each year in the United States. Although most people have seen or heard a bird hit a window, they often believe it is an unusual event. Add up all those deaths and the number is staggering.”

Schubert conducted a student and faculty survey in order to “assess the reactions of students to the [BirdSavers] added to Skillman Library to help determine the project’s next steps,” she wrote in an email.

Schubert reported that data was collected from around 10% of the student body in early November. She wrote in an email that “While there were both positive and negative reactions to the [BirdSavers] if they were noticed at all, over [75 percent] of the students surveyed supported the project once they learned about the [BirdSavers’] purpose and effectiveness at Hugel Science Center.”

About 116 signatures from students showing support for the efforts were also collected, according to Schubert.

Having an “active relationship” with the environment and creating a greater awareness of the issue is an important message to put across, Schubert said.

Butler and Brandes have “teamed up with a number of students to better understand the extent of this problem on our campus and to develop some effective ways to reduce fatalities here,” according to Brandes’ website.

As well as thinking about ways to install more BirdSavers, Schubert said that they have been thinking about ways to also make the installations aesthetically pleasing to everyone involved with the college, including alumni and donors, “since [the project] is going to change the appearances of some of these buildings.”

“It’s wonderful to see the support for this project,” she said, adding that “birds are something that add to your experience in nature, on campus…[and we should be] taking actions to protect [the] birds…we interact with every single day.”