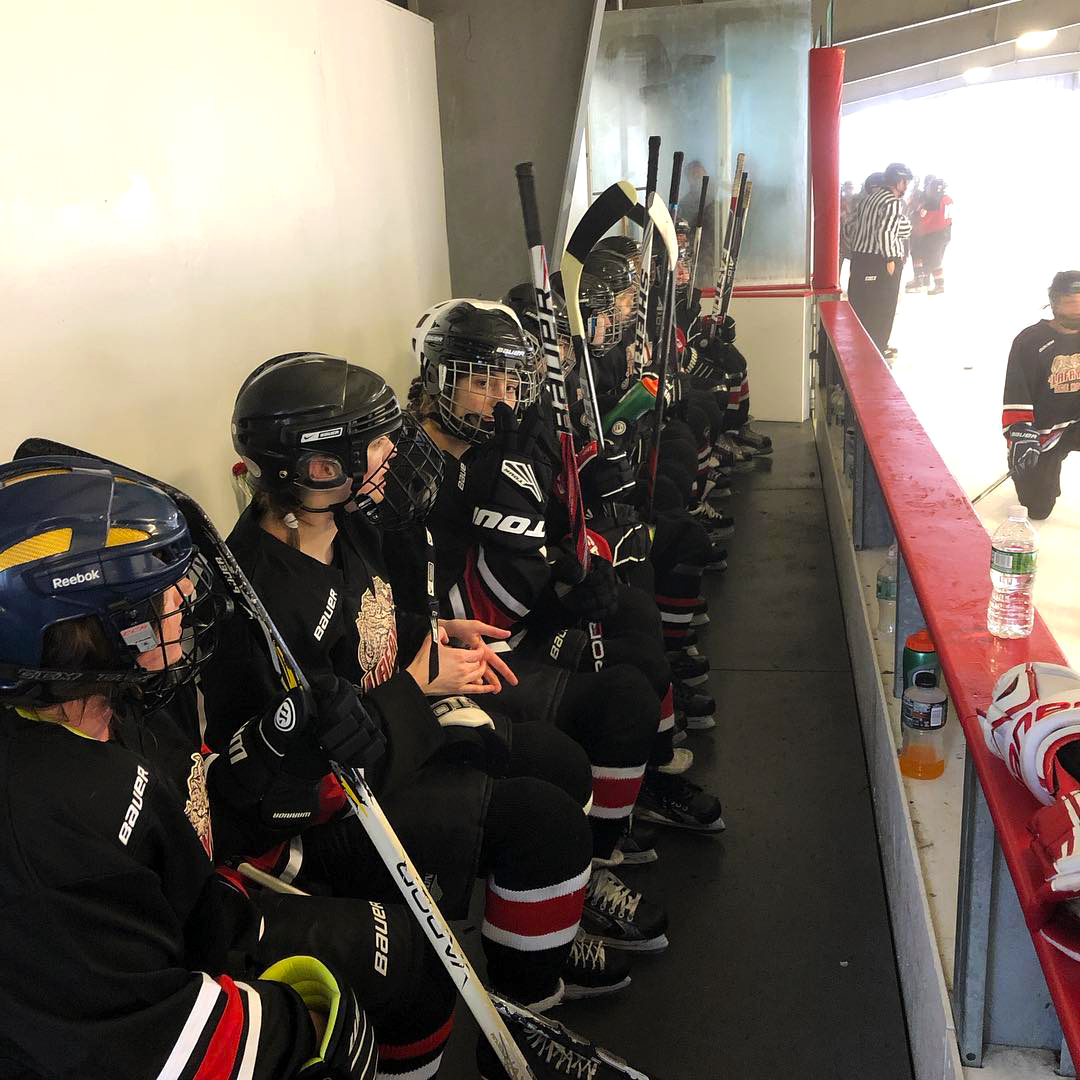 The women’s club hockey team hosted IUP on Sunday for their Senior Day. (Photo courtesy of @laf.ice.hockey on Instagram)

The women’s ice hockey club finished its fall season with a 3-1 loss at home against the Indiana University of Pennsylvania (IUP) this past Sunday. The close game comes off a 5-0 loss the day before, also to IUP.

“We all started Sunday’s game with a different idea of what IUP was going to bring to the table,” senior forward Lexi Kelley said. “Coming off that loss on Saturday, we were all a little more prepared for what to expect. It was a make-or-break whether or not we would make the playoffs.”

Though it was senior day and the locker room was decorated to celebrate the end of the official season, the team was looking to earn the win to make it to the playoffs.

“Before the game, [team founder and senior defenseman Amanda Grisanti] asked if we were playing to win or playing to play,” sophomore forward Hannah Greaves said. “As much as it was a senior day, we were all trying to focus.”

IUP scored first in the game, but Greaves tied it up with her first career goal.

“It was surreal,” Greaves said. “It wasn’t even the goal itself, it was that [senior forward Jenna Ellis] was literally crying and everyone was screaming. That’s the part that meant most to me. The feeling was so nice that I almost forgot that I scored.”

“I, with my broken rib and all, was jumping for joy,” Grisanti said. “Everyone was so happy for her and it just shows how you can come and start playing and pick it up and score a goal.”

The game remained tied going into the third period. Looking to spark the team to a victory, Grisanti entered the game despite her injury.

“We knew we still had a chance,” Greaves said. “[Grisanti] came in at such a crucial point in the game, we knew it would be a huge difference. The timing of her entrance boosted all of our spirits and gave us confidence.”

Grisanti wove through the defense of IUP and took a shot which missed. She nudged the rebound in with her leg, causing the goal to be waved off.

“It was clear to us and IUP how this game was going to go,” Greaves said. “They knew they had to step up their game.”

Though IUP would come up with two more goals to win the game, the team said that because of their effort, it didn’t feel like a loss.

“Although our season was cut short because we didn’t win the games this weekend, as a team I felt like it was a win,” Kelley said. “I made so many new friendships and learned new skills and learned a sport that I think I’ll do after graduating, whether it’s pickup or being a more informed watcher. As we’ve stressed throughout the season, it’s not the score, it’s everything that comes with it.”

“Obviously we didn’t win on the scoreboard, but we had individual wins and group dynamic wins that felt like we didn’t lose,” Greaves added.

The team finished the season with a win, a tie, and five losses. The win and tie were the first two home games in the program’s history at the arena they use in Whitehall, Pa., against the defending champion, the University of Virginia (UVA).

“Last year when we played UVA we had all as a team been disappointed that we didn’t come out with a win, but we all knew we had the ability to win,” Grisanti said. “Going into this game specifically, the girls that were on the team last year and I had a personal goal to win this game because of our disappointment from last year. We proved ourselves right that we had the ability to beat them and it showed this year.”

Players on the team expressed how much they appreciated the more relaxed and fun experience they have, especially compared to how they saw teammates of their opponents treating each other.

“I’m glad our season went like this, rather than winning every game and going to the championship, but knowing we all hated each other,” Greaves said. “I value the team dynamic more than wins or losses.”

The team’s spring season is scheduled to start on Saturday, Feb. 9 at home against St. Joseph’s University.

“We’re probably going to move away from the skating part and more on the hockey,” Greaves said of future practices. “Everyone’s been getting better, so we can do more hockey drills.”

“We’ll continue to focus on skills and clean up our plays,” Kelley added. “Our team focuses on having a good time. The score is the score, but what matters is that everyone’s enjoying themselves. With time and practice, everyone is likely to get better, but what’s important is enjoying the time.”