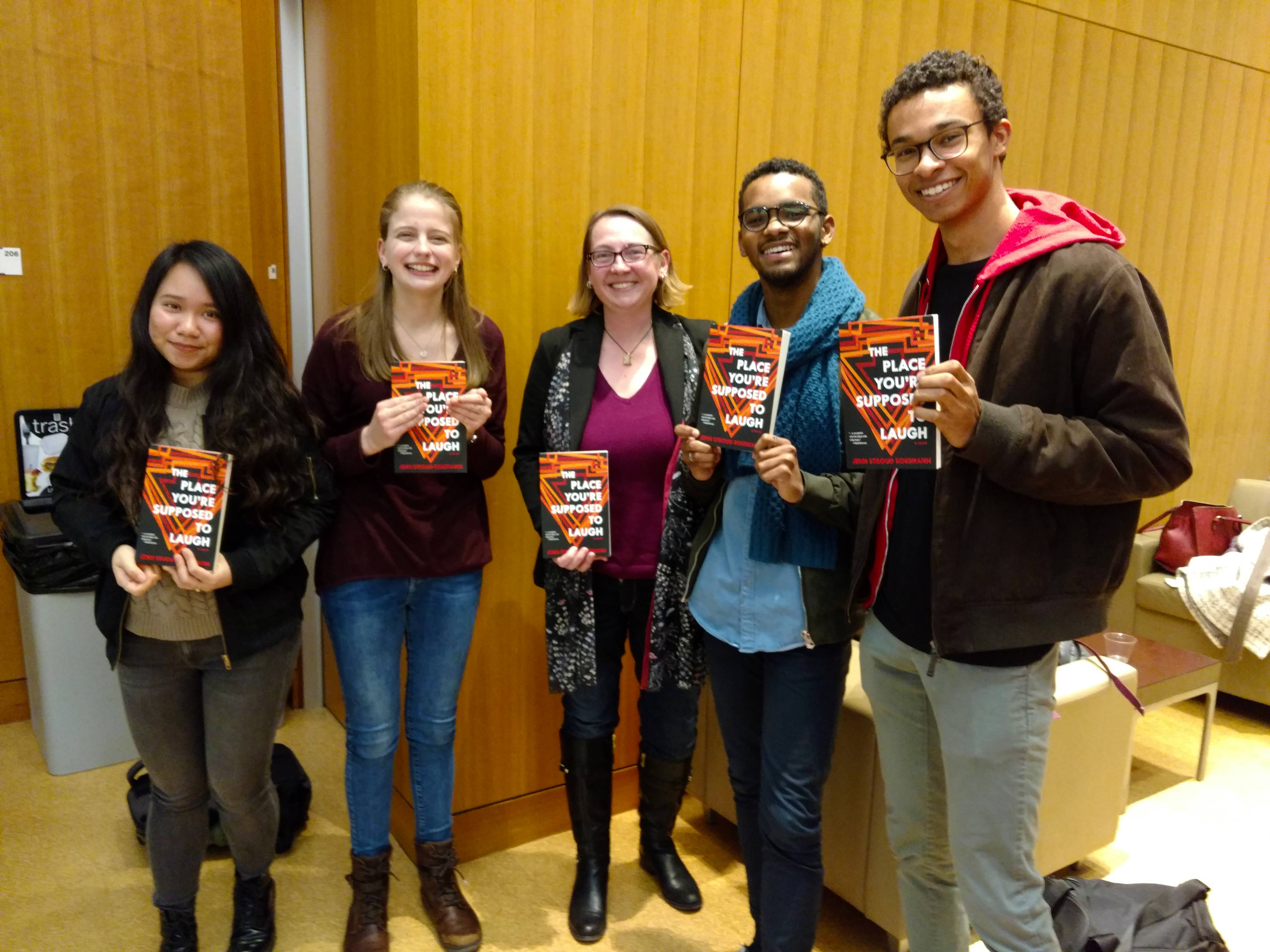 Jennie Richardson ’20 and Mario Sanchez ’21 were honored as the winners of the seventh annual Flash Fiction Reading on Tuesday. (Photo courtesy of Lee Upton)

The winners and honorable mentions of the flash fiction contest were honored for their work at the seventh annual Flash Fiction Reading in Skillman Library this Tuesday.

Those selected to read at the event had submitted a story of 500 words or less to the contest and had been selected as either winners or honorable mention recipients by professor, author, and judge of the competition Jenn Rossmann, who also read an excerpt from her new novel, “The Place You’re Supposed to Laugh,” during the event.

Out of many competitors, Professor Rossman chose Jennie Richardson ’20 and Mario Sanchez ’21 as the winners of the contest, and awarded honorable mentions to Roman Daniel ’22, Oliver Finlay ’22, Olivia Hill ’19 and Trang Le ’21.

Daniel read his piece first, titled “Wayward House,” which he described as “a short horror story about a man spending the night at an abandoned maternity house.”

He was followed by Finlay, who told a Mark Twain-esque story called “Lessons,” featuring children who attempted to escape from their rather troubled parents. However, the children then decided to return the next day for they believed their parents had learned their lesson.

Hill followed, who described her story, “Ollie,” as “a character study,” portraying a young boy who “always seems to fall through the cracks.” “Ollie” provided a glimpse into the boy’s first grade classroom and showed the reader that the experience he had there as an unnoticed, almost invisible child would set the tone for the way he would behave and be perceived for the rest of his life.

Le’s story, entitled “Homecoming,” took a more personal approach, somewhat basing her writing on her experience coming back to her home country of Vietnam after her first year in college. When the main character in her story returned to her home, “she realized she somewhat felt out of place–it’s home but it’s not entirely home anymore.”

In Le’s story, the character’s horizons had expanded along with her perceptions of the world, and she therefore found that her feelings about language, people, the environment, and other aspects of her home had changed.

Richardson followed Le reading her work entitled “Magic’s Limitations,” centered around a girl and her best friend. According to Richardson, the story has “three different levels,” the first of which is the girl’s fear of drowning, the second being her imagining her friend and herself as a mermaid and a fairy respectively, and the last level showing that she suffers from mental illness, and “equates drowning physically with drowning mentally.”

Sanchez was the last to read his work, and shared his story called “The Blue Child,” in which a mother discusses her complicated feelings about her child and parenthood. The mother is an artist, “and projects her own identity onto Baby Nora, who is her one-year-old daughter.”

Sanchez explained that the mother is both an unreliable narrator and mentally ill. In his story, he pushes the reader to question and examine her beliefs and her relationship with Baby Nora, and to understand that she is often too caught up in her own thoughts to pay attention to the feelings and needs of her daughter.

Each story captivated the audience with not only important lessons, but also a peek into the minds of the talented writers who shared their work. The event highlighted the many impressive capabilities of the students.

Mario Sanchez ’21 is the Arts and Culture Editor of The Lafayette. He did not edit the content of this article.