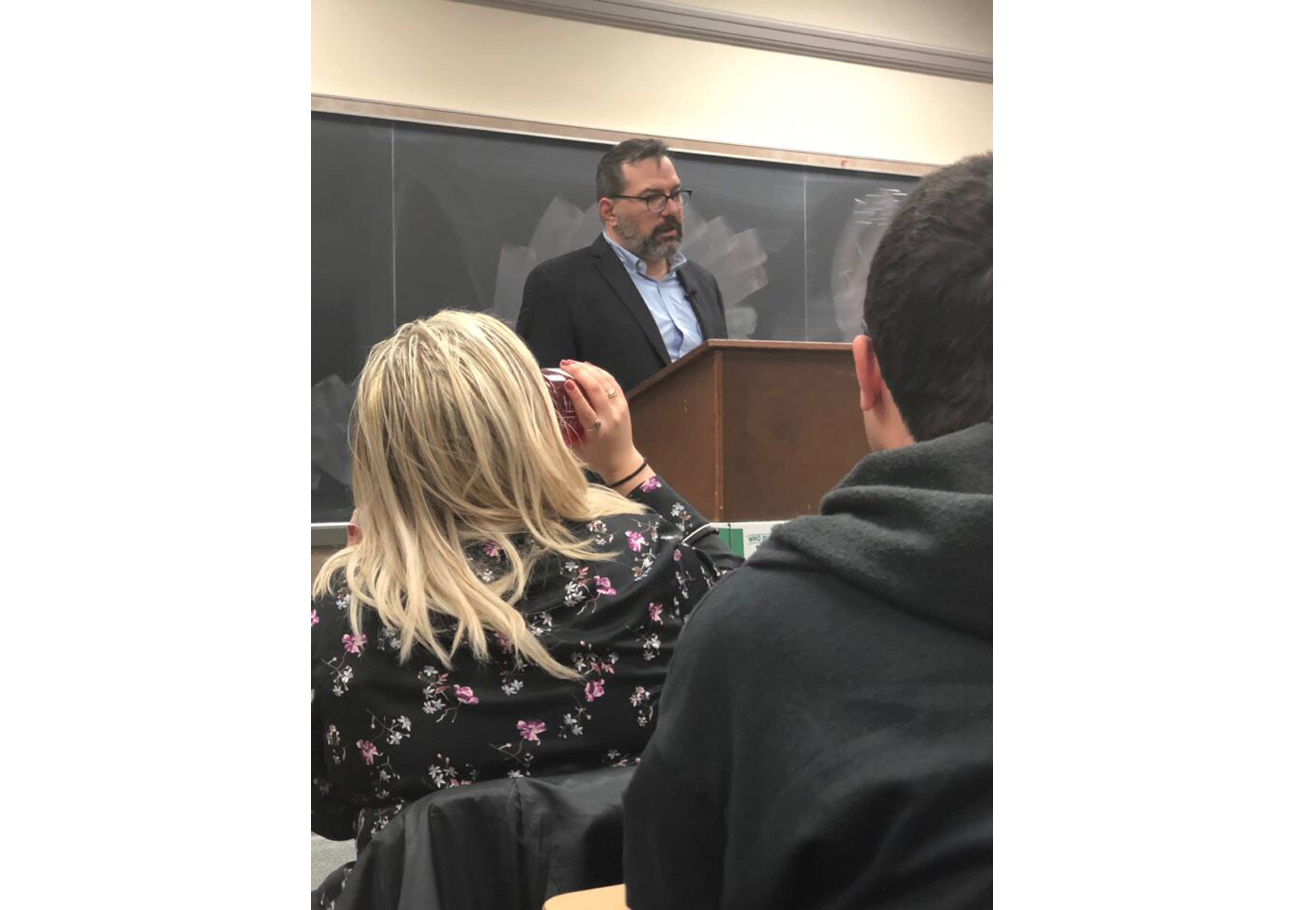 The controversial Mill Series was under scrutiny this past Tuesday during their talk and discussion led by Angus Johnston, historian and advocate of student activism on campuses. He offered his views on who deserves a platform when engaging in intellectual discussions and debates. Johnston spoke for a half hour to a classroom of around 40 people, with some sitting on the floor because the room ran out of chairs.

He spoke generally on what the Mill Series should be like based on their mission statement. After his talk ensued a two-hour discussion in which some students familiar with the Mill Series, the groups’ two leaders and Johnston spoke about points of contention with the viewpoint-diversity initiative, which formerly aimed to bring conservative views to the campus.

“Why do we give people a platform?” Johnston began. “The ‘why’ part of this is crucial because without it one cannot answer who deserves a platform.”

The Mill Series invited Johnston to campus, and he began his talk by referencing the mission statement of the Mill Series: to provide a platform to expose students to a wide range of viewpoints and encourages respectful conversation. He spoke on how a group with that mission statement should work, but said that he did not know enough about what the Mill Series has done to comment on specific ways they could improve.

“The pursuit of truth is not just a solitary endeavor. It’s a process that we engage in together,” Johnston said. “The Mill Series is predicated on the premise that the way we pursue truth is by working together, collaborating and coming together as a community of people.”

He listed the three conditions that he finds essential to create a constructive dialogue: openness, sincerity and willingness to create a community and engage.

“Overall, you have these [three] obligations because these are the circumstances in which people can come together in search of the truth. If people are not willing to do this, then people you’re engaging with aren’t willing to take risks in return,” Johnston said.

The second half of Johnston’s talk took the idea of communal pursuit of truth and transitioned into a discussion of who should be platformed during this truth-seeking process.

He first discussed five types of groups not beneficial to the conversation: trolls, who only seek to amuse themselves but articulate no position of their own; devil’s advocates, who argue just to argue; dilettantes, people with no intellectual commitment; provocateurs, who choose to humiliate and embarrass others rather than reevaluate their own positions; and finally, the wantonly cruel, “who don’t care whom they hurt.”

According to Johnston, it is necessary to exclude these groups in order to facilitate productive conversations. Though this process can be difficult, Johnston said that it can also be immensely rewarding.

To facilitate this shared understanding, Johnston recommends choosing a topic first, and then finding the right person to give it.

When an audience member asked who should be invited to speak on campus, Johnston described the characteristics of a speaker who promotes the communal process of truth-seeking.

“What is required for engaging in dialogue is a willingness to debate in an open, intellectual and honest way which values the process of finding truth,” Johnston said. “If you’re going to say that what you’re interested in is the pursuit of truth, then you need to understand that it is costly and difficult work and requires the effort of all participants.”

After Johnston answered a few more questions from the audience, Mill Series organizers Professor Brandon van Dyck, of government and law, and Saeed Malami ’20 discussed their reasoning for running the series. Their comments included areas where they agreed or disagreed with Johnston, as well as their thoughts on how members of campus view the Mill Series.

A major area of disagreement for Malami was why inviting devil’s advocates is a bad way to encourage discussion. Johnston argued that devil’s advocates enter discussions without a willingness to change their mind. He said that when one of their arguments is refuted, they will resort to other arguments and so on until they re-state the original argument.

Van Dyck claimed that most critics of the Mill Series have not actually attended their talks. He explained that despite their goal of opening discussions between people with opposing views, they have had the same small group of students at each of their talks.

In response, several students argued that speakers invited to share their views should be properly qualified, referencing the talk given by Roaming Millennial last year entitled “Why I Supported Trump.” Students asked Johnston if he researched Roaming Millenial, to which he replied that he did. He said he began watching her reaction video responding to students’ reactions to her talk at Lafayette, but turned it off after she began by advertising a tea brand. He said it was clear she would not be providing a response worth watching.

Some students pointed out that student activists who identify as liberal were not represented in the Mill Series. Van Dyck said they reached out to some of them and they all declined to be involved.

As students gradually began to leave the room, discussion involved Johnston less and less, becoming a discussion between critics of the series and Van Dyck and Malami.

Van Dyck said he wants students who, for example, hate Trump to come discuss why. Jennie Richardson ’20 replied that is it not her job to educate others on issues like why survivors of sexual assault should be believed. Johnston agreed with Richardson, referencing his point that those who are detached and unaffected by an issue should not debate it and need to work on educating themselves.

Van Dyck asked how he could increase turnout at Mill Series events, to which someone pointed out that Johnston’s talk more than filled all the seats in the room.