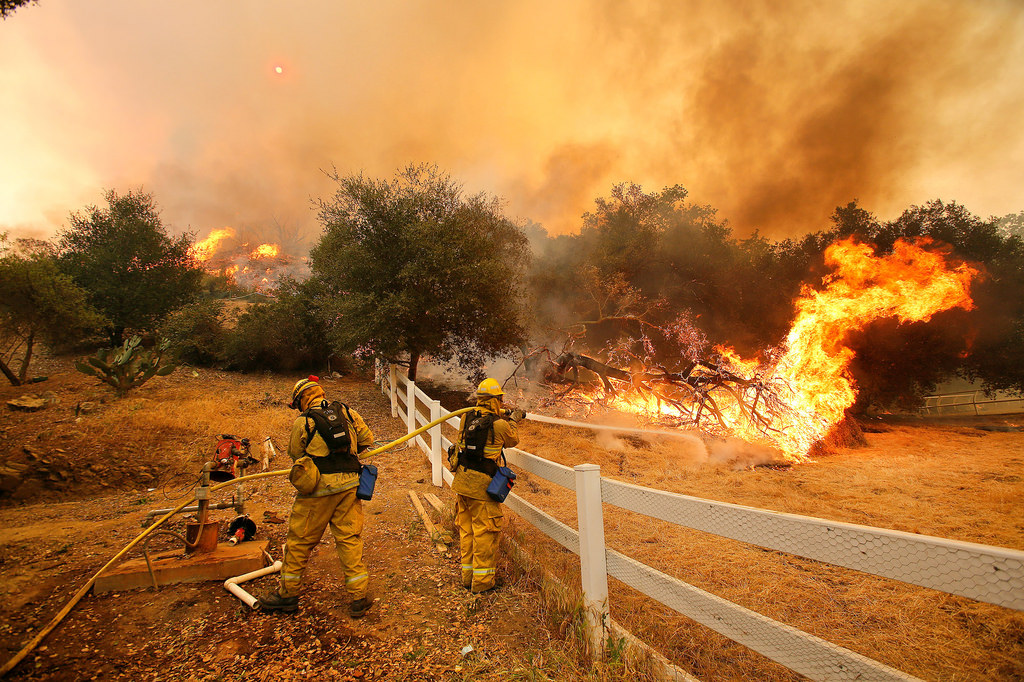 The recent wildfires in California have been widely attributed to the effects of climate change. (Photo courtesy of AP Photo/ Los Angeles Times, Meg Melcon)

This past decade has seen a record area of California burned, and leading scientists say that this is directly attributable to climate change. Over 129 million trees have died in California according to the Fourth National Climate Assessment conducted by the US Global Change Research Program, and the seasonal wildfires that are common to certain regions of California have been increasing in intensity.

Allie Rosen ‘19 from San Francisco, whose friend’s house burned down, has been directly affected by the fires.

“My best friend’s father’s house was in Paradise and was burned down entirely,” he said. “They lost everything. My family has to walk around in breathing masks when they leave the house.”

Knowing this was what his friends and family have been living through has not been easy for Rosen. “It’s been lingering in the back of my conscience, never seriously getting to me, but it’s definitely made me very uneasy.”

Worsening wildfires have been cited as one of the devastating effects of the rate at which climate change is accelerating in a landmark report released by the United Nations. In the report, 91 scientists from 40 countries analyzed more than 6,000 scientific studies to draw their conclusions, according to a New York Times article on the report.

The report describes how the increasing severity of the fires, in terms of area affected, monetary damage and loss of human life, is a direct result of climate change. Higher ambient temperatures lead to drier trees leads to worse fires. More specifically, a recent drought in California has created these especially dry conditions. According to the report, this drought could be commonplace by 2040, as current projections estimate a rise of 2.7 degrees Fahrenheit in atmospheric temperature by 2040.

Unless strong action is taken, the fires like those currently sweeping through California could bring the United States economy down by 10 percent, The New York Times reported. This strongly conflicts with the message being spread by the current United States administration, that combating climate change and reducing greenhouse gas emissions will have negative ramifications for the US economy.

For the most part, however, students from California such as were not directly affected by the most recent fires, but the magnitude of the fires meant that the smoke covered almost the entire state.

Rheya Jain ‘21 is from Woodside, Calif., and has friends back home “who have had school cancelled due to smoke and toxic air quality.”

Quality of life has been different for Jain’s family during the course of the fire. When she went home over Thanksgiving, her mom, who has asthma, “found it hard to go outside and breathe in general due to the smoke.”  Visibility is low in current conditions, so the family’s view of the Bay became a view of the smoke-filled air.

Samantha Tierney ‘20 is from Orinda, about 20 miles away from San Francisco. When she went home for Thanksgiving, she got a firsthand take on the effects on the fires.

“Luckily we [live] pretty far from the fires, so we were not directly affected, but it was super smoky where I live,” Tierney said.

The Washington Post reported on Nov. 26 that the fires, after killing 85 people and burning over 14,000 homes, have finally been controlled by local firefighters. However, the debate rages on over what to do about issues that could continue to arise from climate change if its effects continue to be ignored.