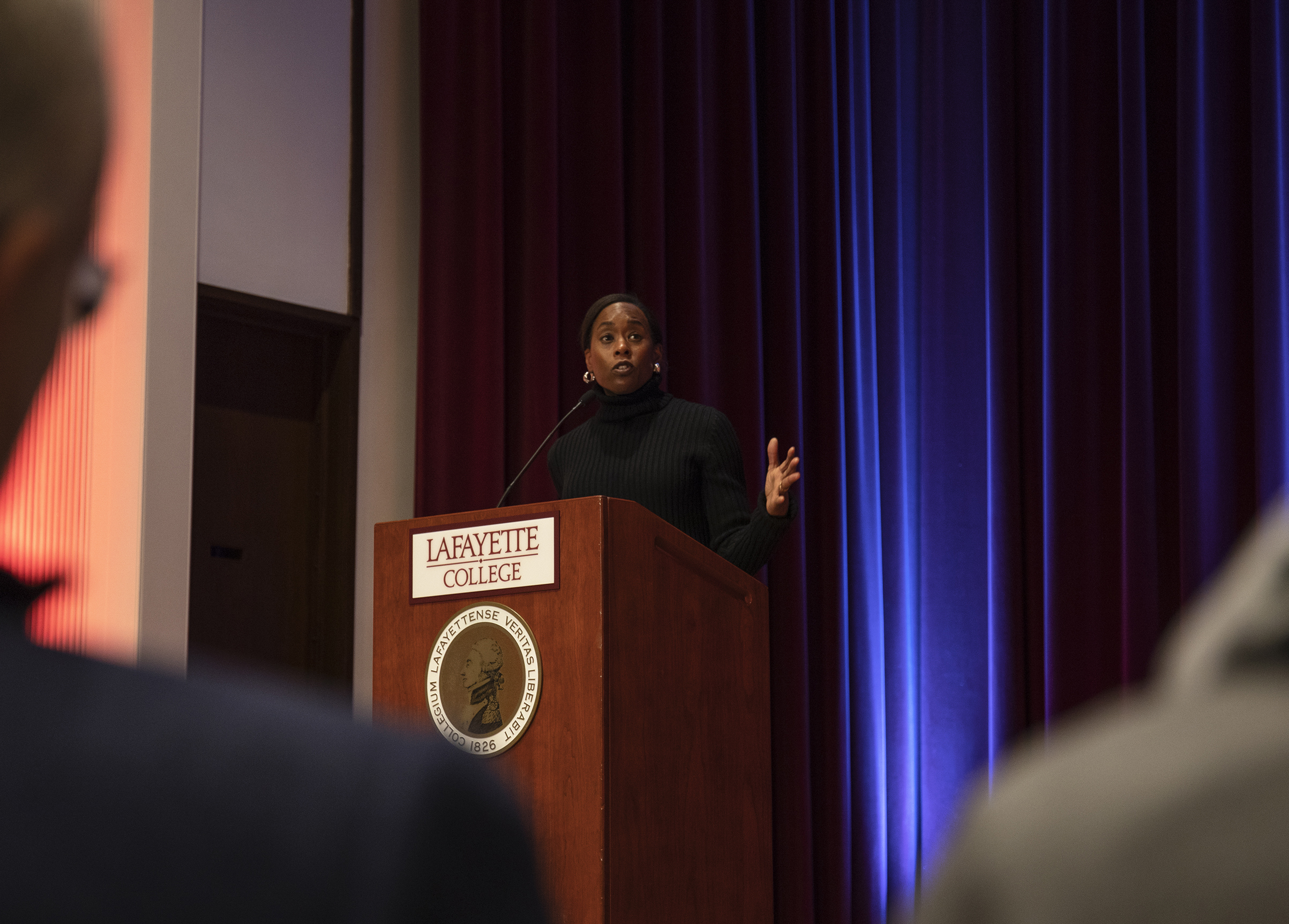 World-renowned author Margot Lee Shetterly spoke to a packed Colton Chapel audience Wednesday night about her book-turned Hollywood-blockbuster, and what her story means for students today.

Shetterly is the author of the 2016 non-fiction book entitled “Hidden Figures: The Story of the African-American Women Who Helped Win the Space Race,” which has since been turned into an award-winning film. The number-one New York Times best-seller follows the lives of three African-American women who worked as scientists at NASA, labeled “human computers.” They did much mathematical work behind NASA missions during the Space Race between the Soviet Union and the United States.

“Hidden Figures is, in a very real way, my origin story,” Shetterly said. Her mother was a professor at Hampton University and her father was a research scientist at the NASA-Langley Research Center.

Shetterly began conducting research for her novel in December 2010. By March 2014, she pursued a literary agent to represent her novel and shortly after, she was contacted by a Hollywood movie producer, Donna Gigliotti, who was interested in making a movie out of Shetterly’s book proposal—which had not yet been published.

Shetterly was initially nervous about the idea due to her portrayal of other people’s lives in her book. While she did have influence on the movie as a producer, the filmmakers made several changes to the storyline, some of which were incorrect.

However, Shetterly said, she ultimately loved the final product.

During her lecture, Shetterly emphasized her novel’s mix of the unfamiliar and the unknown as one reason people enjoy the movie and the novel.

“This is a story that makes connections between historical events that we usually think of as separate: World War II, the Space Race, the fight for gender equality and the civil rights movement,” Shetterly said. “Hidden Figures is a black story and it is a women story. It’s a story of mathematicians. It’s a story of space geeks and engineers and of mothers. And mostly, I see this as an all-American story.”

Shetterly commended Lafayette for their inclusiveness and their strides towards women participation in STEM fields, noting that 40 percent of the college’s engineering program is women.

“Most of the twentieth century scientific progress has been supported by women sitting in rooms, doing math,” Shetterly said.

In her final words of advice to Lafayette students, Shetterly emphasized the importance of a mission to contribute to society in order to find fulfillment in work, mentioning how Katherine Johnson, former NASA research mathematician and one of the main characters in the book, enjoyed every single day of her work.

Leading up to Shetterly’s visit, Women in Computing (WINC) organized a week of activities co-sponsored by the Dyer Center, the Office of Advising and the Computer Science Department. On Monday, Women’s and Gender Studies Professor Mary Armstrong gave a lunch discussion on discrimination, social assumptions and algorithms. On Tuesday, there was a viewing of the documentary CODE: Debugging the Gender Gap, followed by a networking reception. Another lunch discussion was held on Wednesday, where female scholars in the STEM field discussed their professional experiences and obstacles.

Shetterly’s lecture was this year’s Resnik Memorial Lecture named in honor of astronaut Judith A. Resnik, an electrical engineer who lost her life in the Challenger space shuttle disaster on Jan. 28, 1986. It was additionally sponsored by the John ‘39 and Muriel Landis Lecture Series.

Update 12/2/2018: The headline of this article has been updated to match the printed version.