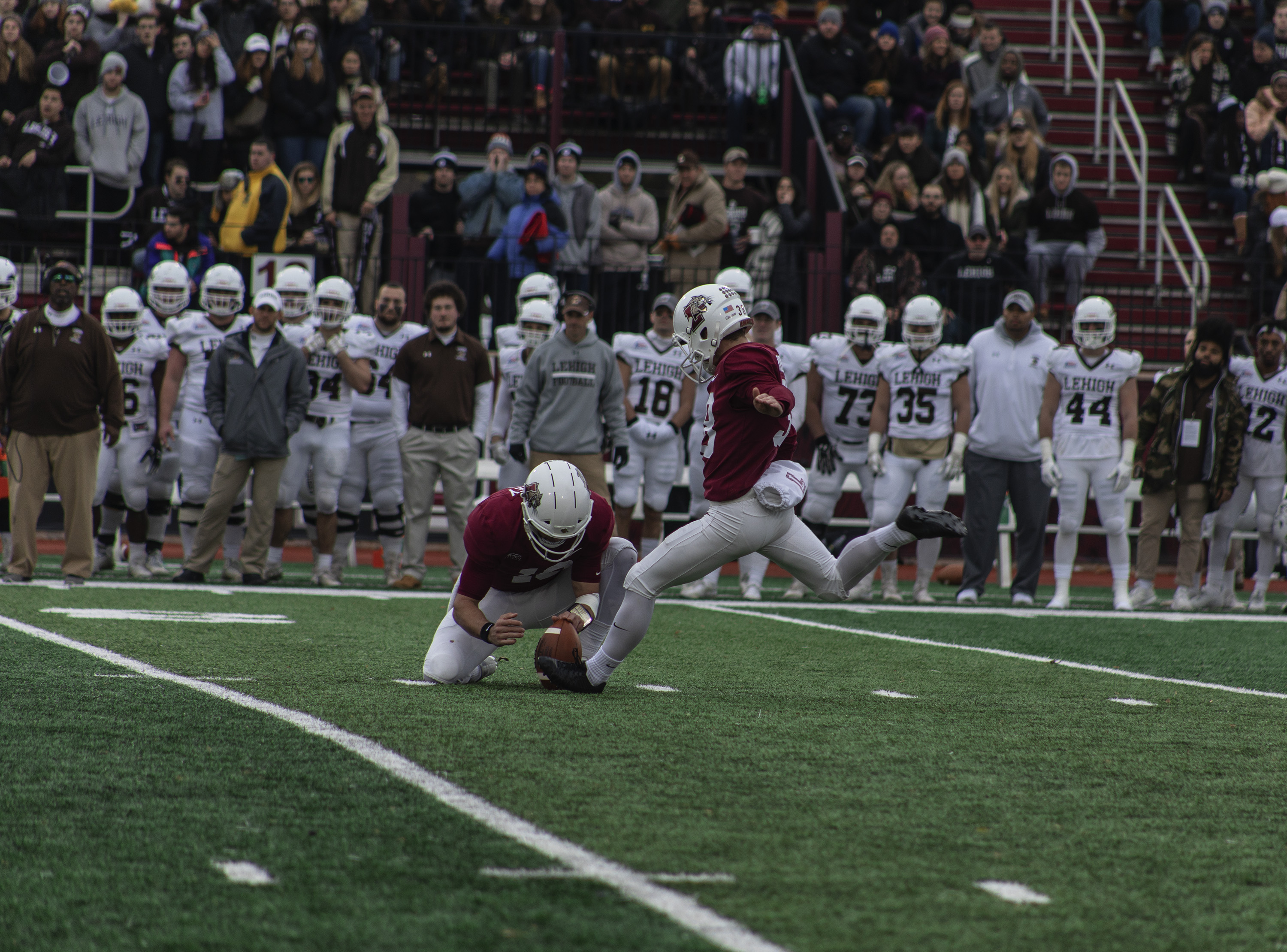 Sophomore kicker Jeffrey Kordenbrock provided the lone score for the Leopards with his career-long 43-yard field goal in the second quarter. (Photo by Elle Cox ’21).

The Leopards lost the 154th meeting of The Rivalry on Saturday, Nov. 17, as Lehigh capitalized on Lafayette mistakes en route to a 34-3 win. The first three touchdowns for the Mountain Hawks were the result of errors from the Leopards on offense and special teams. The defense held Lehigh to 10 points all game on drives they started in their own territory.

The Leopards created opportunities to get back into the game with some good punt returns, but could never regain control.

“[I’m] disappointed with the results,” head coach John Garrett said. “Give all the credit to Lehigh. They played well, they responded to the events of the game, and they outplayed us. We were not ready to play and I take full responsibility for that.”

For the senior class, the loss completed a Lehigh sweep in The Rivalry. The last time the Leopards won was at the 150th game in Yankee Stadium.

Lehigh’s advantage came on the second play of the game. After sophomore running back JJ Younger rumbled for a 36-yard kickoff return to midfield, Lehigh’s defense broke through the Lafayette offensive line to close in on sophomore quarterback Sean O’Malley. The ball popped right out and into the arms of Lehigh’s freshman defensive lineman David Maxie, who ran it back for the score.

“It was just a freak play, the left tackle got beat on the play on an inside move, [O’Malley] got hit, the ball went up in the air, they caught it and they ran in, so it’s a fluke play and it’s 7-0,” Garrett said. “But that really didn’t have anything to do with the results of the game. There’s 14 minutes and 49 seconds to go in the first quarter. You just got to be able to respond and keep playing.”

The Lafayette offense couldn’t respond, but the defense held Lehigh to a field goal on the next drive. The Leopards were down 10-0 when a high snap on a punt attempt set up the Mountain Hawks on the one-yard line with four tries to score a touchdown. They converted on the second.

Lafayette held a small advantage in the second quarter, notching a field goal while keeping Lehigh scoreless. After his first attempt was blocked in the first quarter, sophomore kicker Jeffrey Kordenbrock hit a career-high 43-yarder to put the Leopards on the board.

His third attempt appeared to be blocked as the half ended, but a pre-snap penalty gave the Leopards a second chance. O’Malley almost had a touchdown to freshman wide receiver Tim Payne, but the ball was dropped in the endzone.

“It really would’ve been great to score right there and make it a one score game,” Garrett said. “To be able to go in 17-10 with all the things that we faced against us…all those things we had to overcome, it was right there and it was a bang bang play. [Payne] was covered closely, looked like he got his hands on it, just didn’t come away with it.”

To start the second half, the Leopards looked to keep their momentum by forcing a three-and-out by the Mountain Hawks. However, the ensuing punt was muffed and recovered by Lehigh, which capitalized by driving 26 yards and punching in their third touchdown to make it 24-3.

Garrett looked to get the Leopards back into the game by calling a fake punt play, but Lehigh called a timeout to spoil the opportunity.

“We’ve stayed aggressive all year and we have evidence of that over, really, my whole time here of being aggressive with fourth down calls and faking punts and field goals and stuff like that,” Garrett said. “We’re prepared for those situations and actually love to be in those situations when we can call them because it can really be a great lift to the team and serve as motivation, but really it just gets you closer to scoring.”

The Leopards continued to have a hard time getting anything going, in part due to eight penalties setting them back a combined 94 yards.

Lehigh kept scoring, and put their exclamation point on the game with a touchdown halfway through the fourth quarter. It was Lehigh senior running back and game MVP Dom Bragalone’s third of the game.

While big parts of the Leopards team such as running back CJ Amill and linebacker Michael Root are graduating, the team’s young core will look to build on five conference wins in the past two seasons.

“I think we have a really great group,” Crossan said. “[The non-seniors] definitely contributed a lot. They have a lot of game experience and they’re motivated.”

“I think this [game] serves as real fuel and motivation to continue to improve and not to be defined by that one game,” Garrett said. “We got a great group of kids. I love them to death. And it’ll be a great offseason and we’re looking forward to getting back out there again.”