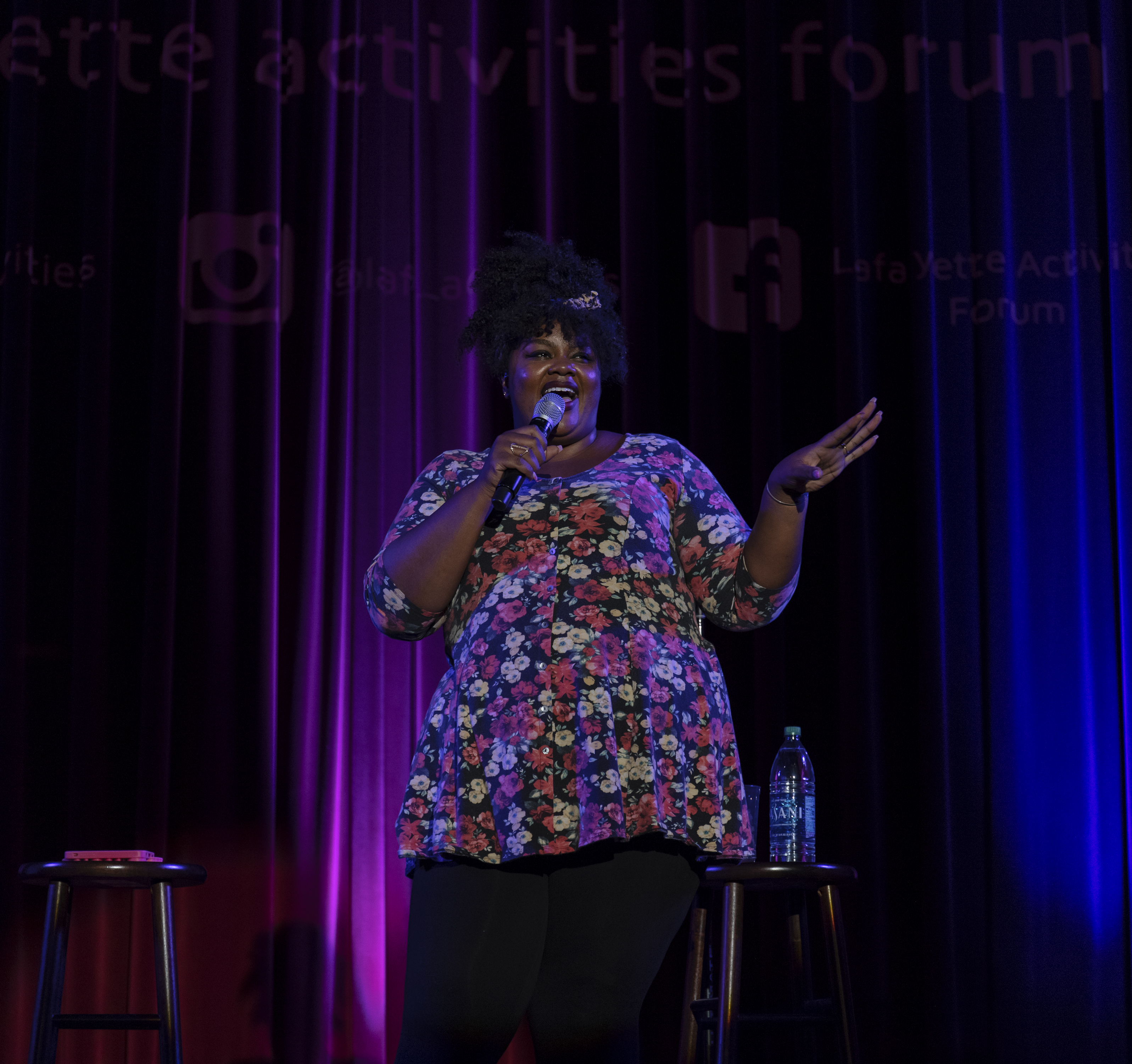 Nicole Byer left students roaring in laughter after she entertained and shocked the audience with her comedy show Wednesday night in Colton Chapel. Byer is both a comedian and actress, well-known for her role as a commentator on the MTV reality show, “Girl Code,” and her recently-released Netflix bake-off show, “Nailed It.”

Byer’s entrance set the tone for her show: she walked directly to the stage from outside with her purse in-hand and her leopard-print coat still on.

She had audience members laughing right away, saying she was told there was a “football thing” happening this week. She began her show by talking about her recent travels around the country. She also wasn’t afraid to make jokes based on race, body type or sex life.

Byer, who is African-American, joked about an experience she had in Iowa, where she felt like there were “no black people.”

“It was me, my cousin, her boyfriend and no black people for miles,” she joked.

Byer told a story about an encounter she had in her hotel in Iowa with two “drunk white women” whom she ran into at the front desk of the hotel. When Byer denied the women’s request to tell them a joke after they learned she was a comedian, she said that one woman touched her hair as she was attempting to leave the lobby.

“[She] touches my hair and says ‘I like it,’ and I was like ‘I hate you, don’t touch my hair,’” Byer joked. “I don’t need to touch a white ladies’ hair. I know what string feels like.”

Byer also referenced an incident that occurred in 2016 when an African-American Santa was hired at the Mall of America in Minnesota and “people were mad about it.”

“I was like uh, Santa’s not real. You can’t be mad they assigned an ethnicity to a person that doesn’t exist,” Byer joked. “Also, we live in the future. You can be any color you want, truly. We have an orange president.”

Byer also talked about the new show on Netflix “Nailed It,” which she co-hosts with Jacques Torres.

“It’s a baking show where people, who don’t know how to bake, compete to feed me poison,” Byer said. “I have never eaten a good thing, but the job is great.”

Byer joked that the only “downside” to this is her new fan base: children. She told a story of a time she went to Target and was stopped by a little girl who was calling her “Cake Lady.”

Part of Byer’s show also centered around jokes she comfortably made about her body type.

Byer joked about how her California driver’s license lists her weight.

“My driver’s license currently says I’m 150 pounds… I haven’t been 150 pounds since fourth grade,” she joked.

Byer explained that she is confident and that “being fat and being beautiful aren’t mutually exclusive.”

The audience also laughed at some of the sexual jokes Byer made. In particular, she talked about some of her conversations with men on Tinder and interacted with an audience member named Neil who said he had been in several past relationships from Tinder.

When Byer asked Neil how many relationships he had been in as a result of Tinder, he responded saying “define relationships,” to which the audience reacted with roaring laughter. Byer proceeded to playfully mock him.

The last jokes in Byer’s show centered around experiences she has had on flights, including a time she found a piece of poop in the blanket in her seat-back. She also talked about a time she had nine mini bottles of vodka on a four-hour red-eye flight.

“Everyone is sleeping and I am the drunkest I have ever been,” Byer said, laughing.

She ended her show by explaining that after she got off this flight, she found herself in the bathroom, still drunk, eating a burger and crying all at once.

“And the moral of that story,” Byer said, “is that we should all live our lives like Neil.”