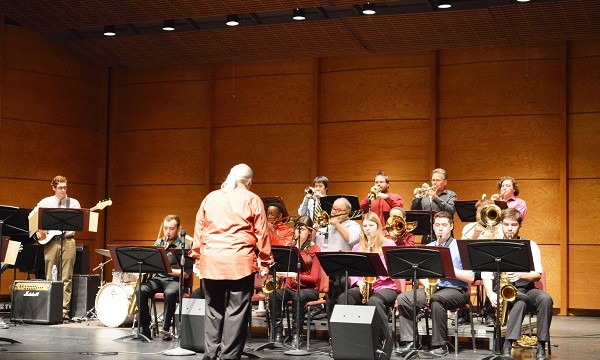 The Jazz Ensemble has once again delivered a marvelous jazz concert, filled with skilled soloists, delightful improvisation and overall providing a wonderful viewing experience. The ensemble was led by music professor Walter Wilkins, who goes by Skip.

The Ensemble’s alluring sound captivated the audience through nearly two hours of jazz in the form of nine pieces Wednesday night in the Williams Center for the Arts.

The group is divided into four sections: saxophones, trumpets, trombones and the rhythm section, which included a pianist, two guitarists, upright bass and two drummers who alternated on songs throughout the night. Individual moments shone through as well as group coordination.

The opening with “Blues in Hoss’ Flat” by Frank Forster brought together an auspiciously uptempo beginning to the night, drawing the ear to the sound of an entire brass section ringing out as one.

Kentaro Mori ’19 led off with the first solo on his trumpet and also closed out the song. Throughout the concert, he shone through with frequently flashy and striking solos which highlighted his aptitude on the instrument.

The other soloists often faded into a call and response action with the band which contributed to a seamless transition and kept this song and other well connected. Jon Abel ’20 on keys comped for almost the entire show when he wasn’t soloing.

Abel also started off the second song, “Cross Currents” by Ellen Rowe, which began quietly and slowly, in quite a lovely fashion. He did an excellent job setting the tone for the song. Abel’s solos throughout the night were polished and delivered with confidence, alternatively showing off his virtuosity and deep understanding.

Jonathan Anastos ’19 also shone through on guitar, offering us a fiery standing solo. His solos were one of the highlights of the show. Mike Van Ness ’20 gave us yet another demonstration of his tremendous skill and smooth technique, and Nick Colicchio ’21 coaxed a sultry sound out of his baritone saxophone.

At the beginning of the song “Blues in B flat,” Wilkins worked out a beat with the band and then began pointing people out to play throughout the piece. And it was positively exhilarating. It was obvious to the audience that everyone on stage was having a grand time with it, and the room was abuzz with energy.

Wilkins mentioned during the performance that many of the performers were talented first years, and one could see that these young talents truly rose to the occasion. Both drummers, Jordan Lieber ’22 and Cole Raymond 22’, demonstrated their enormous aptitude through rousing rhythms and passionate sequences which fueled the latter moments of several songs. Jack Garceau ’22 performed several excellent solos on tenor saxophone.

“The ‘Maiden Voyage’ chart is, without sheet music, more of a head chart, we’ll be doing mostly soloing over it. We’ll play the head, but the head will be all by memory.” Nick Colicchio ’21 said before the performance.

The concert closed with the classic “Anthropology” by Charlie Parker, performed by Gillespie and Bird.

The greatest aspect of “Anthropology” is that it sounds good even when played at a normal tempo and not the blur of notes emerging from Bird’s horn. Mike Van Ness ’20 truly embodied the spirit of Bird.

In the days before the concert, Ness said that “it was certainly a difficult sax solo to learn, more challenging than anything in past years, certainly a fun tune to play because the solo is directly transcribing Bird’s solo from his famous recording. Good piece to play, good rhythm changes.”

Overall Jazz Ensemble provided a stunning performance which exceeded even the high expectations afforded, due to previous years of quality concerts.