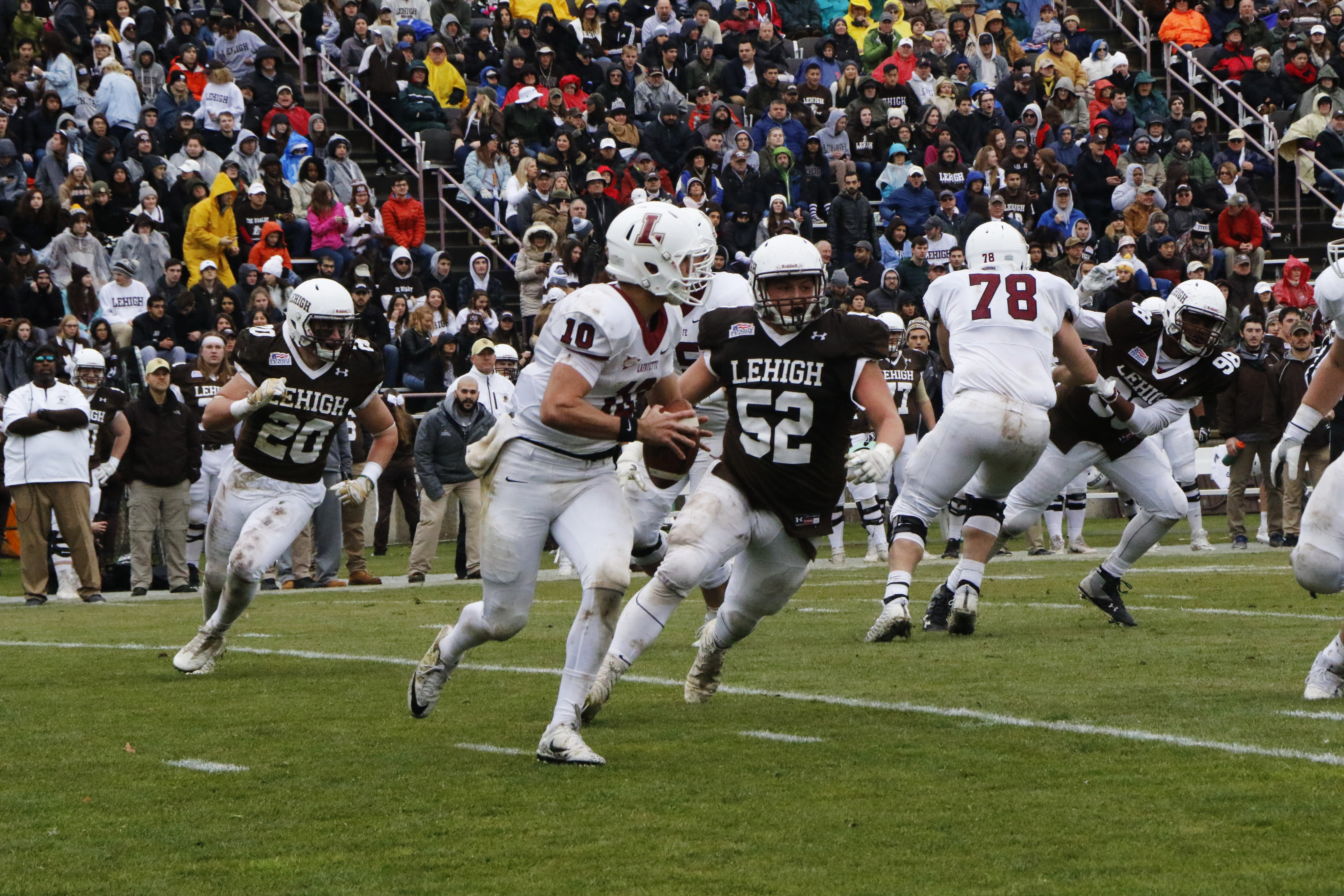 Sophomore quarterback Sean O’Malley looks to improve on last year’s performance after throwing 6-18 against Lehigh in 2017. (Photo by Jess Futado ’19)

Why Lafayette will win

In the 154th matchup of The Rivalry, Lafayette will have home-field advantage as the Leopards try to record a .500 Patriot League record for the second year in a row. Lehigh will look to salvage a 2-4 Patriot League record, after winning the conference the last two years.

When it comes to rivalry games like Laf-Lehigh, season records aren’t that relevant. What is telling is the teams’ season scoring differential. While Lehigh has scored nine more points than Lafayette this season, they have given up almost 100 more on defense.

The 2017 Laf-Lehigh game saw Lehigh’s potent offense and subpar defense go up against Lafayette’s struggling offense and stellar defense. The difference this year is that two key playmakers from the Lehigh offense graduated.

Wide receivers Troy Pelletier and Gatlin Casey were a top-notch combo for quarterback Brad Mayes, who earned MVP honors in last year’s installment of The Rivalry. Casey is sixth all-time in receiving yards for Lehigh, and Pelletier is the all-time Patriot League leader in receptions, yards and touchdowns.

Without the two receivers, Mayes went from 31 touchdowns in 2017 to just 10 in 2018 with one game to go. He entered the season with the second-lowest interception percentage in Lehigh history, but this season, he has thrown more picks than touchdowns, with 12 interceptions.

On defense, the Leopards also graduated two Patriot League first-teamers: linebacker Brandon Bryant and defensive back Phillip Parham. It’s hard to replace the two, but freshman defensive lineman Malik Hamm has been a force, recording 7.5 sacks and 52 total tackles while earning consideration for the Jerry Rice Award, which is given annually to the most outstanding freshman player in the Football Championship Subdivison (FCS).

On the offensive end, Lafayette has stepped up a notch. Running backs CJ Amill, a senior, and Selwyn Simpson, a sophomore, are both averaging over four yards per carry. Two wide receivers, sophomore JJ Younger and junior Nick Pearson, have totaled 120 yards on 24 carries.

Despite the Leopards’ underwhelming passing game, offensive success should come on the run. In six out of their 10 games this season, the Mountain Hawks have conceded four touchdowns or more. Four times, opponents have rushed for over 300 yards against Lehigh, and two were over 400.

The Leopards reached their highest point total of the season last year in The Rivalry, and this season should be no different. Garrett can mix rushes by Amill and Simpson with end-arounds with wide receivers to carve up the Mountain Hawk defense. This year, the Leopards have a season-high of 31 points going into The Rivalry and are poised to find the endzone more than last season.

Written by AJ Traub ’20, Assistant Sports Editor of The Lafayette

Why Lehigh will win

It’s no shock to say that both the Lehigh and Lafayette teams have had disappointing seasons. At 2-8 and 3-7 respectively, neither team has performed at the caliber to which they are capable of.

With that being said, the Rivalry is anyone’s game.

Numbers-wise, the two teams are pretty evenly matched, with Lehigh scoring 149 points this season to Lafayette’s 140. Those numbers are nowhere near what each team has allowed defensively, which means this game will likely be pretty low-scoring.

Lehigh’s offense needs to be fully in sync, much like it was in its win over Bucknell in which the Mountain Hawks scored a season-high 45 points. Lehigh quarterback Brad Mayes has all of the pieces to put on a show on Saturday and will look to sophomore wide receiver Jorge Portorreal, senior running back Dom Bragalone and freshman running back Rashawn Allen to secure a win for the Mountain Hawks. In last year’s meeting of the Rivalry, three out of the five Lehigh touchdowns were scored by now-graduated standouts Troy Pelletier and Gatlin Casey, so the Lehigh offensive leaders in Mayes and Bragalone will have to make up for lost talent.

The Rivalry matchup is always unlike any other game of the season, and it’s no telling what each of the teams will bring to Fisher Stadium on Saturday afternoon. The senior class prides itself on having never lost a Le-Laf game, and the Mountain Hawks are looking to keep it that way.

By Sarah Epstein, Sports Editor of The Brown and White