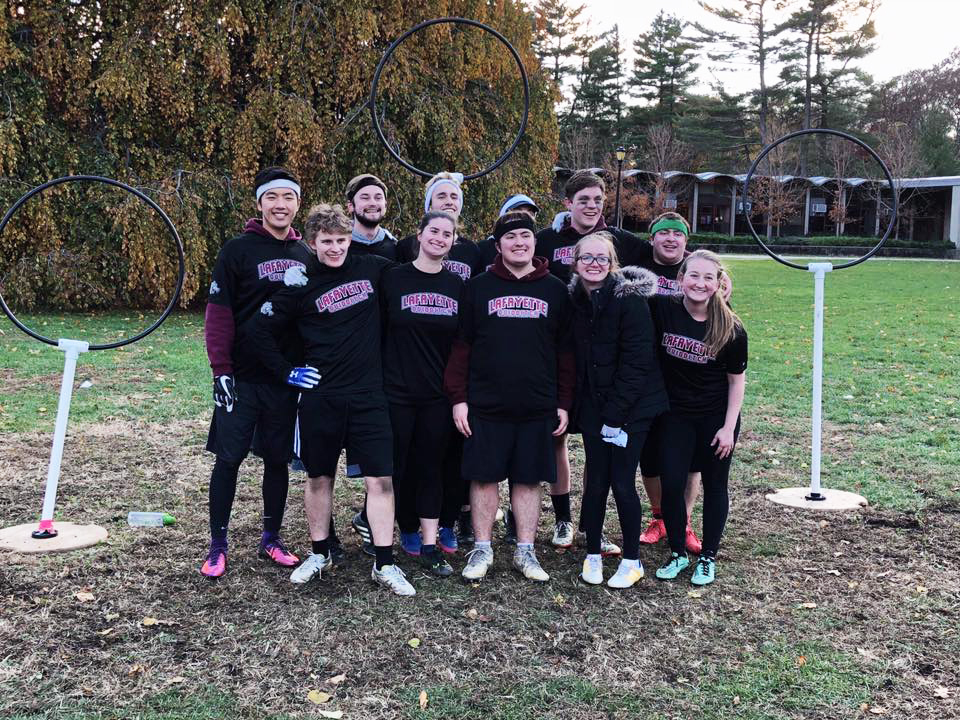 With a first place-finish this past Saturday at Vassar College, the Lafayette quidditch team won its first major tournament since the club formed. After dropping its first pool play matchup, the team dominated its other pool play matchup before winning all three of their playoff games, including the championship against Middlebury, where college quidditch originated.

Junior coach, chaser and seeker Will Pfadenhauer and senior keeper and chaser coach Tyler Durso-Finley led the team in scoring, earning most of the team’s goals. Junior chaser Becca Hetrick and sophomore seeker and chaser Dominic Zhang also contributed to the scoring on the day. Zhang caught the snitch in two games, and Pfadenhauer’s snitch catch clinched the tournament win.

The first game Lafayette lost in close fashion, as the University of Vermont erased Lafayette’s lead with a snitch catch to win 60-50.

“I gotta be honest, I think we drastically underestimated UVM,” Pfadenhauer said. “We played them twice last year and defeated them comfortably. It was also the first game after a two-and-a-half hour road trip, so we were all a bit sluggish.”

The team was locked in after the loss to Vermont, winning their next game, and the first two games of the playoffs convincingly. Zhang caught the snitch in a 120-20 win against SUNY New Paltz to end pool play, and again to defeat MIT/Cornell 100-20.

“We couldn’t take anybody easy, we had to play our best no matter what, and I think losing helped lock us in and we were super focused from that point on,” Durso-Finley said.

Pfadenhauer and Durso-Finley credited all areas of the team’s game for the wins, including the beaters who are led by junior beater coach Errol Flynn.

“All of the beaters worked especially hard and I didn’t notice any major mistakes by their crew the entire day,” Pfadenhauer said. “They played fundamentally sound quidditch.”

Pfadenhauer described sophomore beater Sean Trezza as “the animal of the team” and “a silent killer,” as he is generally quiet, but during games he “just destroys the entire other team.”

“In the middle of the New Paltz game, they ran a strategy where all six players get together and move up the field as a pack,” Durso-Finley said. “Fueled by his six pre-tournament donuts, Sean runs up and beats four of them. Just one, two, three, four. The opposing keeper ran away and had to wait for the rest of his team to get back into the play.”

During the tournament it began snowing, but nothing was stopping Lafayette.

“In a word, it was [expletive] awesome,” Durso-Finley said of the snow. “It did make the conditions a little tricky, but it was extremely fun and energizing, playing snow quidditch. It’s always been one of my dreams.”

The team gathered the momentum and energy from their decisive victories going into the final game.

“We weren’t lucky to get into the finals,” Durso-Finley said. “It showed us we deserved to be there. We were connecting all our passes and making all our shots on offense.”

In addition to the consistent offensive effort, the team thrived on defense as well.

“Our defense must have been the best part of the day,” Pfadenhauer said. “Anybody who played defense for us played great defense for us.”

“[Sophomore chaser] Makaela Finley did not allow her mark to receive any passes and let me and [Pfadenhauer] execute our keeper strategy,” Durso-Finley added.

Durso-Finley and Pfadenhauer said their strategy against Middlebury worked perfectly in the championship: keep the game a close defensive battle and try to catch the snitch.

“We knew going into the Middlebury game, after talking to other teams and watching film, we weren’t going to outscore them with the quaffle,” Pfadenhauer said. “They have a nationals bid. So we decided to keep the pace of the game as slow as we possibly could. We ran the double-keeper defense [with Durso-Finley and me] to limit their scoring opportunities.”

Although Durso-Finley said the timekeeper messed up and didn’t announce the snitch and seeker timing, Pfadenhauer was able to get off the field and back in as seeker in time. Meanwhile, the offense and defense kept the team in the game.

“We had to stay in snitch-pull range,” Durso-Finley said. “For every two goals they scored, we had to make sure we got one back. We didn’t want to over-commit and give up easy scores because that would put the game out of reach.”

“It was pretty standard gameplay,” Pfadenhauer said. “The other seeker and myself, we got beat two or three times. I was just able to get it first. You’re not really thinking about it, it’s just complete reaction.”

Upon catching the snitch, Pfadenhauer said he looked for Durso-Finley to “Chris Sale” him, referencing the moment when the Red Sox catcher Christian Vazquez jumped into the arms of the tall and thin pitcher Chris Sale as soon as the Red Sox officially won the World Series.

“Obviously, I was excited,” Pfadenhauer said. “It was the team’s first major tournament win ever. To be a part of that was special, and especially since it’s [Durso-Finley’s] last tournament.”

Pfadenhauer said the team knew they had a good chance at the tournament from the start of the day, saying they were “feeling pretty dangerous.”

“It was validation of everything we’ve worked for,” Durso-Finley said. “Every strategy we’ve implemented in practice. Every minute we spent analyzing film and game-planning just led to this moment. It played out exactly how we drew it up.”

After two other tournaments where the team finished well but failed to break through with a win, coaches Pfadenhauer, Durso-Finley, and Flynn worked to improve the team for their biggest tournament of the season.

“For me, all of the play designs I worked on with the chasers allowed us to set up the quaffle effectively,” Durso-Finley said. “People were moving where I wanted them to without me needing to vocalize. Team communication and teamwork really emerged during this tournament.”

Another advantage Pfadenhauer said the team had was that they ate sandwiches instead of the pizza Vassar provides for all the teams.

For the past two years now, [junior beater] Lindsay Altschuler’s parents have, out of the kindness of their hearts, gone out and bought sandwiches for the entire team, which fueled us better than pizza would,” Pfadenhauer said.

With their first major tournament win, the quidditch team’s tournament season is done for the fall.

“We’ve been putting in a lot of effort for years,” Pfadenhauer said. “For many of us who have been on the team for years, it was rewarding to see all our effort pay off.”

Leaving Vassar, the team blasted Queen’s “We are the Champions,” according to Durso-Finley.

“To quote Phil Collins, I’ve been waiting for this moment for all my life,” he said.