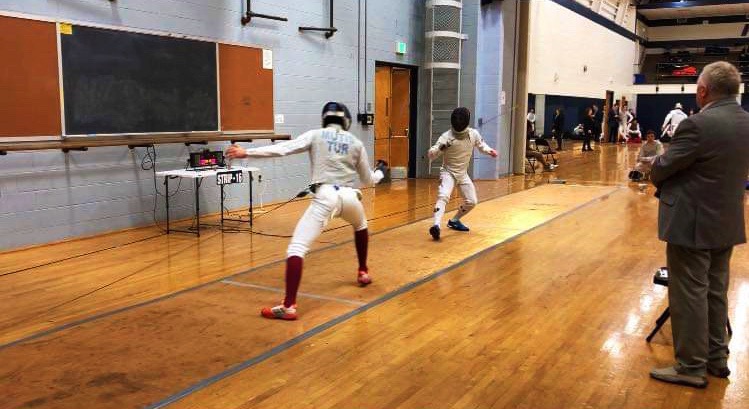 The two-day tournament provided an opportunity for younger fencers to get exposure to the sport at the college level. (Photo courtesy of Zack Lee)

The Lafayette fencing team opened their season at the Garret Open meet, hosted by Penn State University last Saturday. The Leopards competed against a number of solid programs including Harvard, Yale, University of Pennsylvania and Notre Dame.

“Some challenges the team faced this weekend were having the meet be our first of the season and fencing especially difficult schools,” sophomore captain Juliana Sikorski wrote in an email.

Seven women and six men competed in six different events during the two-day meet. In the women’s epee, sophomore Maura Diventura made it to the third round, ultimately finishing 34th for the Leopards, while Sikorski finished 57th and freshman Lily Manetta finished 60th.

“The new team did great considering it was our first meet of the season,” Sikorski wrote. “For our freshman athletes, they have never fenced this type of tournament before and they adapted well to the situation.”

“The team is definitely living up to the goals and expectations that we have for this season,” Sikorski wrote. “We are training harder this year and practices are being taken more seriously. We are also competing at more meets this year which will help the experience of the team grow and strengthen our skills.”

“Our team is different this year because we have a more competitive attitude and we really want to perform better than we have in previous years,” Sikorski wrote. “In our next competition we hope to make it further in the tournaments and winning more bouts.”

The women’s team competes again this weekend on Sunday at Vassar College, while the men’s team hosts the Mid-Atlantic Collegiate Fencing Association meet the following weekend.