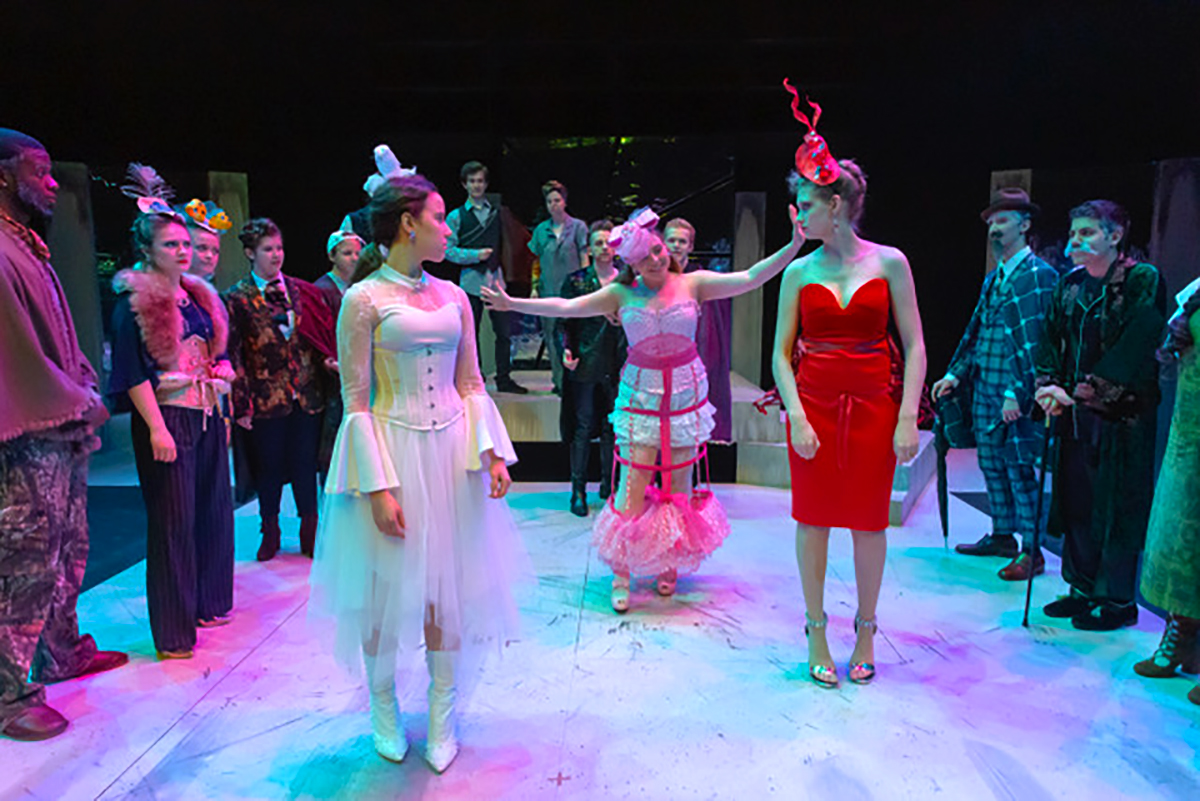 Actors are the ‘greatest trait’ of the theatre department’s production of ‘The Taming of The Shrew/The Tamer Tamed.’ (Photo courtesy of Suzanne Westfall)

The first act of the play was based on Shakespeare’s “The Taming of The Shrew,” a comedy about a man, Petruchio, who marries a headstrong woman, Katherine, in hopes of taming her and gaining her obedience. Shakespeare’s play is a product of its time and features sexist undertones and uncomfortable scenarios in which Katherine is forced to do things by her husband.

Given the climate in our country surrounding sexual assault, “The Taming of the Shrew/The Tamer Tamed” was especially hard to watch, which the theater department took note of this. The director, Professor Suzanne Westfall, wrote in the director’s note: “This production is dedicated to Christine Blasey Ford, the last representative of the 21st-century Monstrous Regiment of Women who daily demonstrate courage in the face of condemnation, criticism, and assault.”

This self-awareness was also displayed within the play when Katherina, played by Milena Berestko ’22, is shown sporting a feminist outfit and carries a sign at one point which remarks, “Same sh*t, different century.” Westfall said that the department chose to use the Italian version of Katherine’s name for this production.

The second act, based on Fletcher’s “The Tamer Tamed,” serves as a response to the original play and reverses the gender roles.

Petruchio, Ethan Miller ’21, is now married to his second wife, Maria, played by Mary Kate Arcuri ’19. Maria refuses to be controlled by Petruchio and to consummate their marriage until he meets her demands for equality.

Maria and The Monstrous Regiment are all seen sporting t-shirts with modern-day feminist slogans in stark contrast to their male counterparts who are in more Shakespearean type clothing, a great choice by costume designer, Erin Hopwood.

The production shines not only in terms of costume design, but also in lighting and music. The set of the show was fairly basic, featuring three mirrors, one of which was larger and cracked. I was unsure if there was any symbolism to this, or what the purpose of it was, but what the show lacked in for set, it made up for in lighting cues and music, which set the tone of the show.

Often modern day music was played in the background with lyrics which were directly applicable to the scene. Ultimately, the production’s greatest trait was its actors. Miller shined as Petruchio and delivered a sinister presence that made me truly fearful for Katherina.

Arcuri delivered the perfect blend of innocence and manipulation in her performance as Maria, and was the perfect woman to lead the charge against the patriarchy in the second half of the show.

Finally, at the end of Act I, Berestko’s monologue brought chills to the room and left the audience stunned, her performance of Katherina was all too accurate, and left a presence beyond the stage.

The production will continue until tomorrow in Weiss Theater at Buck Hall. The play is a must-see.