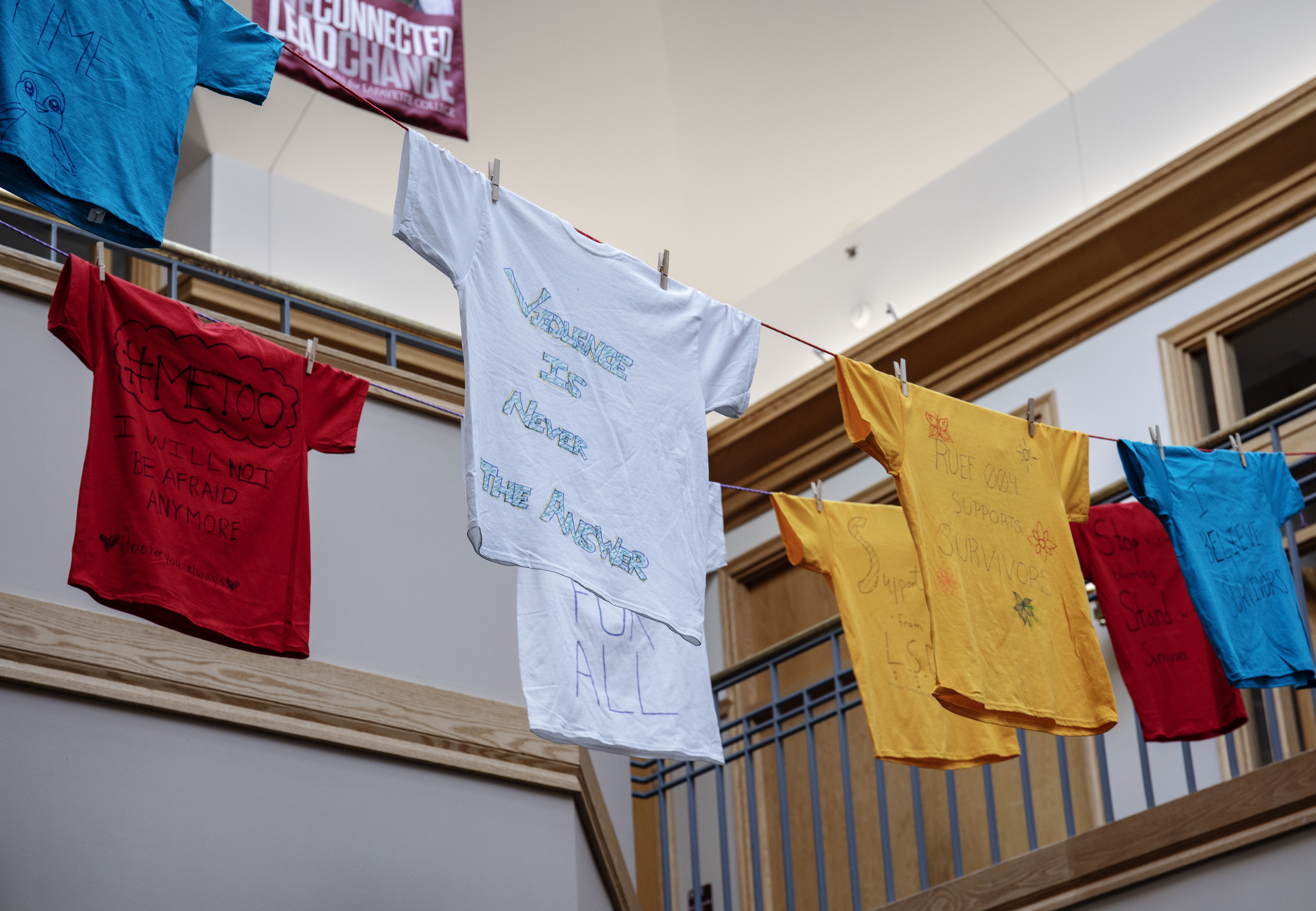 Pards Against Sexual Assault invited the campus community to share their messages by decorating shirts for Take Back the Night. (Photo by Elle Cox ’21)

“You’re not alone.” “Believe survivors.” “I will not be afraid anymore.”

These are some of the messages written on shirts that hung over the atrium of Farinon this week during Pards Against Sexual Assault’s (PASA) second annual Take Back the Night (TBTN). Community members were invited by PASA to create the shirts on Sunday during the five-hour window of the clothesline project, and survivors, allies and whole organizations took the opportunity.

The movie night was a powerful conglomerate of diverse stories. Short films and recordings of poetry were the prompts for discussion among audience members. Two student-facilitators, Isabella Veneziano ’19 and Gabriel Salgado ’20, from PASA led the conversations that ensued following the works.

While the facilitators did issue a warning that the works they were going to show may stir up strong feelings of discomfort—they even pointed to the exits of Limburg Theater—they encouraged the audience to think about what might be making them uncomfortable in the first place.

In “People You May Know,”  Kevin Kantor recounts scrolling through Facebook and seeing his attacker, whom he labeled “the wolf,” in the “people you may know” category. It prompted him to explore his page. He viewed photos “the wolf” posted, ranging from “beast mode” gym photos to a baby photo. A photo like that, one audience member pointed out, is a jarring reminder of how the attacker was once innocent, and humanizes him.

Audience members pointed out in the discussion how this sort of experience is something survivors at Lafayette deal with every day.

Nahin Ferdousi ’19, president and co-founder of PASA, spoke of experiencing essentially the same thing as Kantor, when she would scroll through Facebook and see pictures of her own attacker with friends posted over and over. Others spoke of survivors having to see their attacker consistently on a campus as small as Lafayette’s.

The first film shown, “Sweet Things,” is a Norwegian film that required subtitles for English-speakers to follow along, but the subtleties of the plot did not escape audience members. The film follows a photographer interviewing for a job, but the interviewer acts very inappropriately throughout the ordeal, making her visibly uncomfortable.

In the subsequent discussion, viewers pointed out her growing discomfort: from the way she shrinks from his unwanted touch to her sigh of relief when he’s finally left the cafe where they were talking.

“I think…’Sweet Things’ addressed a lot of relevant issues for women, especially young women entering the workforce, and that discomfort with recognizing…sexual misconduct in the workforce,” and recognizing the possibility of sacrificing one’s career if one reports misconduct, said Sandi Manfreda ’21, who attended the film night.

Two short films and three slam poetry performances were shown. Kayla Medina ’21 praised the inclusivity of the works, and their focus on “different scenarios of survivors, whether it’s male survivors, the LGBT community, minorities, or even with women as well…really showing the community how anyone can be a survivor, but also anyone can be an ally.”

Medina said that Kantor’s poem resonated with her the most.

“Being a survivor myself, I resonated so much with [‘People You May Know’],” she said. “Every survivor’s experience may be different but we all sort of go through the same emotional process afterwards…recollecting ourselves and learning how to love ourselves again.”

The clothesline project put on display some of those emotional processes. Some contained strong messages regarding their personal experiences, and others contained a message of support.

President Alison Byerly stopped by to make her own shirt, writing that “Lafayette stands with survivors.” She said in an interview that she wanted to convey that the campus as a whole works to support survivors. Other shirt decorations included “Violence is never the answer,” and multiple messages showing support of and belief in survivors.

Following PASA’s 5k Wednesday night, they posted on their Facebook page thanking all who showed up to the event, particularly Lafayette Athletics for “being a huge part in the event’s success.”

Last night, PASA held their second ever keynote speaker and candlelight vigil event. As the event occurred after deadline for print on Wednesday night, coverage for the event can only be found here.

Due to time constraints on their schedules and not having the time to comment as in-depth as they would like, the executive board of PASA declined to comment before print.

Udpate (11/8/2018): This article has been updated to include the names of the student-facilitators of the film night.