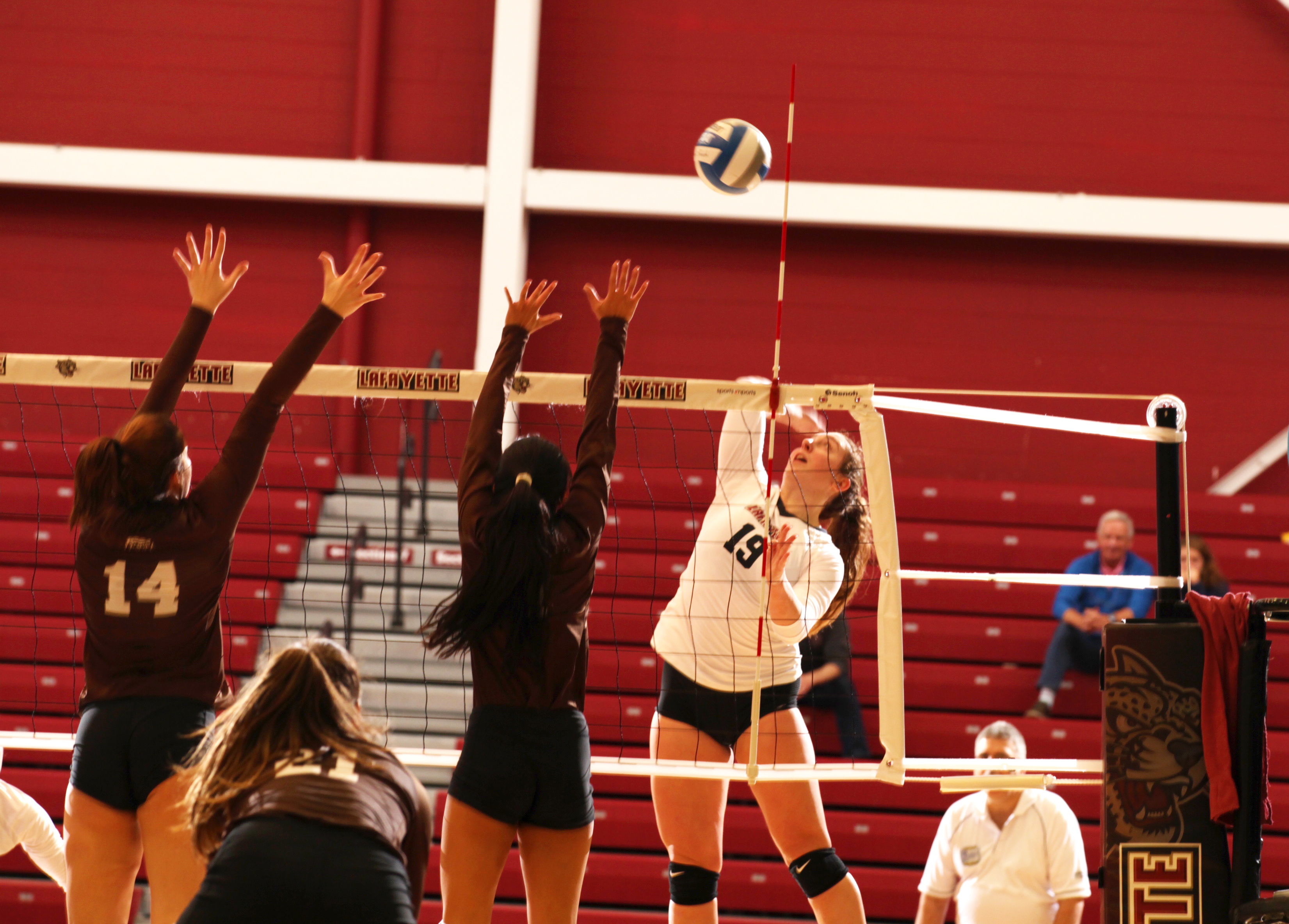 This past weekend, the Lafayette women’s volleyball team lost to Bucknell and Lehigh, falling 3-2 and 3-1 in the two home games. In the first match, the Leopards and the Bison wrestled back and forth, as the team pushed Bucknell to five sets before ultimately losing 15-10 in the final set.

The Leopards started out strong, winning the first set with strong performances from two freshman outside hitters, Grace Tulevech and Leena Deegan, who contributed six and five kills, respectively. Bucknell would go on to win the next set 25-22, before Lafayette stormed back to win a crucial third set 35-33, led by Deegan’s 11 kills.

With a chance for their first Patriot League win on the line, the Leopards needed to win just one more set. Unfortunately, Bucknell finished strong with a 25-19 win in the fourth set before closing out the match with a 15-10 win in the fifth and final set.

Despite the loss, Deegan had a career day with 34 kills and six blocks, breaking a 21-year-old Patriot League record for most kills in a single match. For her record-breaking performance against Bucknell, and an additional 17 kills against Lehigh the following day, Deegan took home Patriot League Rookie of the Week honors.

“I was really impressed with [Deegan]. Every time she would get set, I was confident she would get a kill,” said sophomore middle blocker Adriana Heimbauer. “I was really excited for her. She had a stellar game, and the fact that she’s just a freshman made it so much better.”

After the loss to Bucknell, Lafayette hosted Lehigh in the second rivalry match of the season on Sunday, Nov. 4. Lehigh won the first meeting 3-0. The Leopards dropped the first two sets, 25-20 and 25-19, before winning 25-17 in the third set. However, Lehigh’s relentless offense landed the knockout punch with a 12-0 run in the fourth set to secure the victory.

“I think we put up a good fight but it wasn’t strong enough to get us a win,” Heimbauer added. “We have improved significantly since the last time we played them. We were able to take a set off of them which was exciting.”

“It was a tough loss because Lehigh is our rival but it was well fought,” she added.

The Leopards will wrap up their season this week, after hosting Navy yesterday, and traveling to Holy Cross tomorrow.

Despite a difficult Patriot League season, team members said they are not discouraged as they look to end on a positive note.

“For our last two games, we are really going to play our hardest and come out with a fire that has been more evident in our last few games against Bucknell and Lehigh,” Tulevech said. “I think we have really developed from the beginning of our season even though our record may not show that. Our goal is to play our hardest and put up a really good fight against Navy and Holy Cross.”

Although they have yet to win a game in the Patriot League, the team has grown extremely close and come a long way since the beginning of the season.

“The difference in our team today compared to September is like day and night. We’ve been doing a much better job recently in staying consistent during games and playing smart against tough competition,” Tulevech said. “We are a young team and that has its downsides. However, the fact that all of us will be returning next season puts us at an advantage as we can continue to grow together without losing anyone.”

Although the group has no seniors and only four juniors, Tulevech described how the team members have grown to “trust each other to get the job done,” highlighting the growing chemistry on the court.

“Our connections between passers, setters, and hitters has become stronger and we know each other’s strengths and limitations,” she said. “I think our understanding of one another has really developed over the season and allowed us to grow tremendously as a team.”