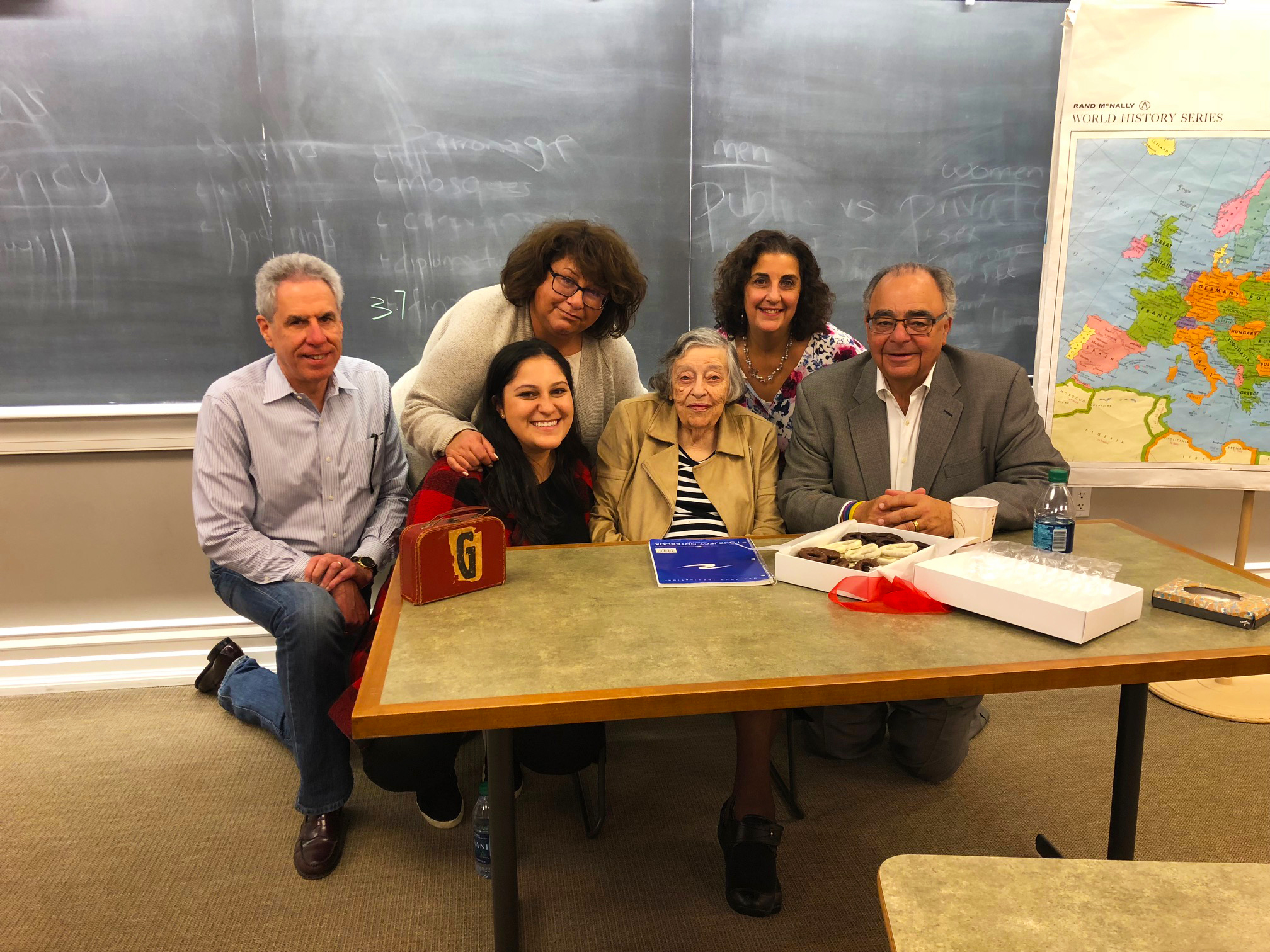 Miriam Gershwin (center) poses with family members after speaking on her experience as a Holocaust survivor. (Photo by Kathryn Kelly ’19)

Decades ago, Miriam Gershwin started speaking about her experience as a Holocaust survivor. She said she sees it as her duty, “so people never forget.” At 95, she still is passing on her story. On Wednesday night, Gershwin spoke in Ramer History House to an intimate group of students of professor Robert Weiner’s class on the Holocaust, along with some faculty and her family members.

Originally from Lithuania, Gershwin was in a concentration and extermination camp in Stutthof, Germany, from 1944 to 1945. Half of the 115,000 total prisoners who were ever held in Stutthof died.

In transport from the Lithuanian Jewish ghetto to the camp, Gershwin and many others were packed into railway cars with no food or room for at least a day. Conditions were so horrid that when the railway car was finally opened, “some were already dead,” she said.

Eventually, Gershwin arrived at Stutthof, where she dug trenches during the day and slept in a tent with nine other women. Without soap, a change of clothes or other basic necessities, the women were ridden with lice and dirt, and unsure of their family members’ fates.

In some of the worst possible conditions, Gershwin said she never lost hope. “A Jewish person always hopes,” she said.

After their liberation in 1945, she and other women from the camp walked along a nearby highway and hoped for the best. The Nazi German soldiers had fled the area, but only a singular friendly soldier had come to acknowledge them. That soldier had to leave the day after he arrived.

Gershwin traveled from town to town with three other women and a teenage girl, eating any food they could find. Gershwin said she finally came upon her husband in Munich, Germany. He had recently been misinformed that Miriam had died at Stutthof. He found out she was still alive, however, when he laid eyes on her for the first time since they’d been separated.

She and her husband went on to have two children, who accompanied her to the college Wednesday night for her talk. Her son, Sam, graduated in 1969 from Lafayette.

Faye Bodenstein, Miriam’s daughter, spoke about how it not only took her mother years to be able to discuss her experience openly, but it took the nation as a whole a long time to begin discussing the Holocaust openly.

Sam said in an interview, and his wife mentioned during the talk, that a conversation with his wife’s family was what opened up the conversation where Sam and Faye finally learned more about their parents’ experience.

Gershwin said that since she is among the last generation of survivors, it is all the more important for her to tell her story.

Harrison Kusnierz ’21 said that he was particularly affected by that component of Gershwin’s message.

“I have a personal connection to the Holocaust, given both my grandparents…on my father’s side survived, and I think her message of not forgetting about it was pretty profound,” Kusnierz said, adding that “the more people that hear about these atrocities, the greater chance of these things never happening again.”

Emily Fidlow ’19 commented on the power of hearing the story told directly from a Holocaust survivor.

“It is an incredibly unique and humbling experience to meet someone with such strength and spirit,” Fidlow wrote in an email. “If we do not keep [survivors’] legacies alive, the Holocaust will eventually be minimized to a chapter in a history textbook at best.”

Professor Weiner said after Miriam’s talk that “her smile and strength are a model” for how people should live. Despite the treacheries she suffered, Miriam said that she does not hate the Germans. “They are not responsible for what their brothers and fathers did,” she said.