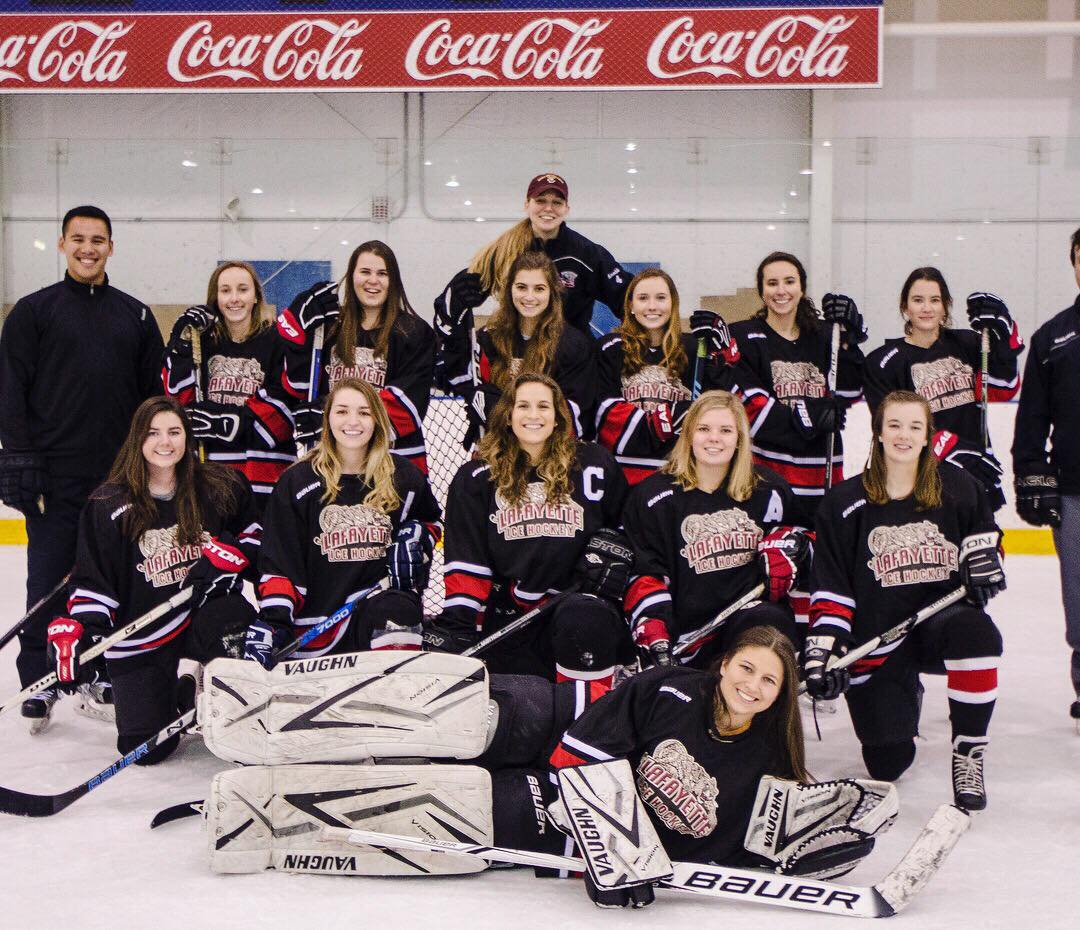 The Lafayette women’s ice hockey came away with a win and a pair of ties in its inaugural season. (Photo courtesy of Taylor Lu Kowgios ’19)

Amanda Grisanti grew up watching and playing hockey with her family. She was looking forward to continuing with the sport she loved at Lafayette, but was “bummed” when she found out that Lafayette had no ice hockey program for women at a club sports panel during Accepted Students’ Day. She was told that some had tried to start a team, but never followed through. Amanda immediately got to work in creating a team in her first semester at school. In her senior year, the team enters its second season in the third division of the Delaware Valley Collegiate Hockey Conference (DVCHC).

Although Grisanti enlisted some help from friends, she carried most of the work to get the team off the ground, senior forward Jenna Ellis said.

“[Grisanti] did almost everything,” Ellis said. “She’s been talking about it since freshman year. We had a few setbacks [over the years], like it was hard to get girls and get the budget in on time. It [all] really came together last year.”

The team currently has a player roster, equipment, a home arena in the Rink at Lehigh Valley in Whitehall, Pa. and a  head coach and volunteer assistant coach, Liam Lansang and Kevin Ihde, respectively.

“I don’t know if I could have done what she did, putting the team together mostly single-handed,” sophomore forward Renna Thomas said. “I don’t think any description on a resumé would reflect how much she put into it.”

Grisanti said she hoped to have the team ready to go for her sophomore year, but the process ended up taking two years. She opened the recruiting to all skill levels and had a table at the Involvement Fair.

“It was a lot of meetings, a lot of petitioning, a lot of figuring out how we can get around problems that arose,” Grisanti said. “It’s hard to recruit girls with such an expensive sport, so we had to find a way to attract girls who had never played the sport before. To do this, we bought individual equipment for the girls, which is owned by the school, but they can have the equipment during the season.”

Although several players on the team haven’t played ice hockey before college, some of the team members have played previously and share a love for the sport.

“I remember talking with [Grisanti] about how much we miss this sport in college and how it sucked that there’s only a men’s team,” Ellis said. “I never thought I’d actually get to play again.”

The team currently lists 14 players on its roster on the DVCHC website going into its second game of the season. The team lost the majority of its games in its first season and its first game in its second season, but the team’s record isn’t the main focus, according to a few players.

“It was a good season, it went a lot better than anyone expected,” Grisanti said. “We didn’t get as many wins as I had hoped, but the games were pretty evenly played with both teams. We were able to keep up with the teams that had been established for years.”

“Honestly, winning is not the biggest thing on our minds,” Ellis added. “I think just keeping up with the go-with-the-flow, fun spirit of the team is my goal for the season.”

Thomas found out about the team through a Facebook group she joined as a freshman. She contacted Grisanti to confirm that it was okay that she didn’t have ice hockey experience.

“I was very nervous,” she said. “Not just because I might embarass myself, but because it’s dangerous. Once I got the confidence to fall and know that being willing to fall made me better, that’s when I started really getting better.”

Thomas said it was the relaxed nature of the team that allowed her to comfortably try it out before deciding to stay on the team and play games. The more experienced members coach her in an encouraging way, rather than aggressive, as she heard was the case for some of the players’ high school or club teams.

“[Grisanti is] so friendly and you [are able to just] try it out, because the equipment came with the budget.” she said. “So you could try it out for a few weeks and see if you liked it. It was such a comfortable experience, so we’re encouraging the new people this year to just try.”

The first games the team played were 9-1 and 7-0 losses at Virginia, but between the car rides and the overnight stay, it was a bonding experience for Thomas.

“Our first game last year, after just two or three practices, was at the University of Virginia, which is about six hours away,” Thomas said. “I just jumped in. After the car ride with the team for six hours, that’s when I was convinced that I wanted to do this, even though I had a lot of learning to do.”

“I can’t tell you how much laughter happened during that game,” Thomas added, of the team’s first game. “We had so much fun.”

The team rebounded from the early losses, when they were playing without their starting goalie. They netted five goals in their third game, a 10-5 loss at Slippery Rock University. The next day came and the team pulled out a 5-3 victory, again at Slippery Rock.

“It was such a good feeling,” Grisanti said of the team’s first win. “We all went to the locker room and blasted music. We were cheering. Everybody was in really good spirits that day and I think it gave us the energy boost to finish out the season strong.”

The team finished its 2017 season with the lone win, but did tie a pair of games as well. Continuing their 2018 season, they will head back to Slippery Rock for games on Saturday and Sunday for the first time since the team broke through for its first ever win.

“We were not expecting it definitely, and [Slippery Rock] wasn’t expecting it either,” Ellis said. “Our first season felt like we were making history. We won the first women’s ice hockey game in Lafayette history with girls who had never played before, and they really stepped up.”

Grisanti plans to set up the team for the long term. She said she was contacted by a recruiting company that asked about the Lafayette program, which she thinks will lead to more players on the team. She also hopes to be “as active as possible” after graduation to help strengthen the team.

“My goal is to just be a source that people can go to next year for advice, any help they need,” Grisanti said. “I’ve actually put together a hockey manual, because there’s a lot to organize a team. So it’s basically everything that needs to be covered each season, contacts that they need to have, and step-by-step instructions for certain processes such as reserving hotels.”

Thomas said a short term goal of the team is to recruit some more experienced players to add to the roster.

“While we have good numbers this year, we have a lot of new people,” she said. “So if we can get the word out about it, anyone that does want to play might join, which will give us more success.”