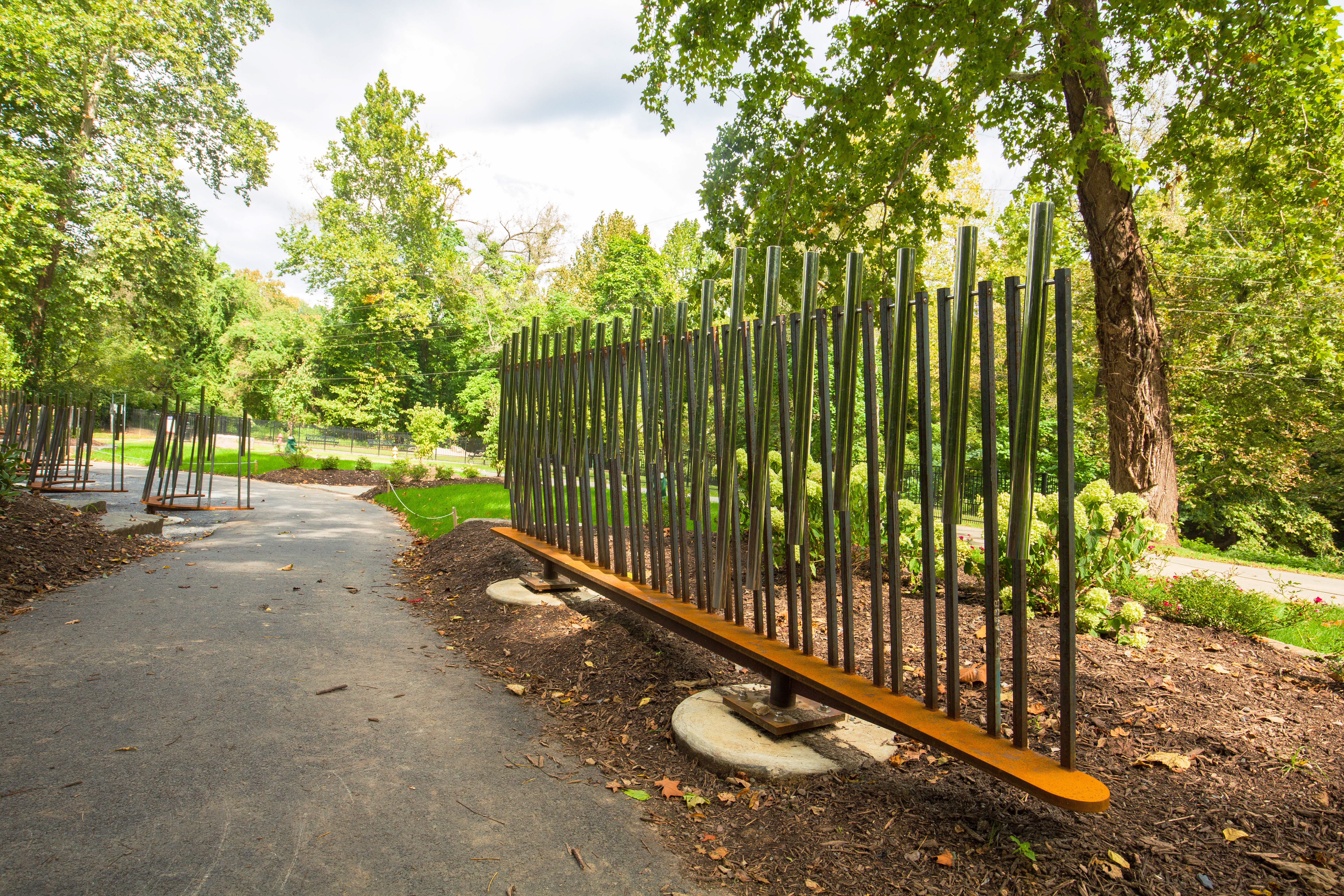 Each set of chimes in the ‘Musical Playground’ installation on the Karl Stirner Arts Trail plays a unique tune. (Photo courtesy of Dave Block)

After three years of work on the Musical Playground art installation, three sets of musical chimes whose total installation cost amounted to $100,000 are now available in the Karl Stirner Arts Trail.

The vision that students and faculty members had with the installation was for children and adults alike to be able to pick up a random stick and run along the fences. One of the chimes plays Ludwig van Beethoven’s Für Elise.

Recent graduate Johnny Gossick ’18, who was an Anthropology & Sociology and Music double-major before switching to Computer Science, rearranged the notes of another set of chimes to create his own version of Für Elise, and called it “Fur Easton,” according to Engineering Studies Professor Benjamin Cohen.

“We wanted a unique experience for our visitors, one that qualified as an artistic moment….but that was also playable and understandable by anyone. From a three-year-old to a 103-year-old,” said Director of Community-Based Learning and board member of the Karl Stirner Arts Trail committee Jim Toia.

Toia said that the installation gives “someone that power to create music in a very simple way, it opens up doors for them that they might not have considered before.” He added that when thinking about the project, the team wanted to tune the notes of the chimes so that “it is a pleasing sound.”

In the spring of 2016, Cohen taught a course called “Sustainable Solutions” where about eight or nine students carried out the proposal from his 2015’s Engineering Studies Capstone on “a background feasibility study and basic design on what that would mean….the premise was that it was a children’s musical playground,” he said.

Because the class dealt with sustainable-based projects, the team wanted the installation to be environmentally friendly. Cohen said that the class considered “fitting into the environment using….the earth slope of the land as part of the design.”

One of the important components were preventing noise pollution and choosing environmentally friendly metals that are meant for durability and long-life.

“We made it so that it has a 20 to 30 year lifespan,” Toia said. “The hope is that as people understand or experience the musical path more….then more and more people want to play it and experiment on it.”

The team consisted of students from a range of majors such as engineering, music, and art. Having students from diverse academic backgrounds is “an ideal engineering studies kind of project,” Cohen said.

When thinking about the installation, students had to negotiate between the more artistic side and the more practical.

“So having students from very different backgrounds was so helpful in engaging all these different constituents,” according to Cohen.

Adding that in his past experience, the more people involved in a project, the narrower the project gets “so that the final result is just a pale comparison to the original,” whereas the process of this installation was the opposite in that it got better as the group moved through “different stages.”

According to Toia, the installation cost about $100,000, which were mainly from donations, grants and “people who lent their talents.”

According to an email by Toia, Architect Gordon Raupp from Long Valley, NJ, designed the chime landscape layout, Architect Joe Biondo from Bethlehem, Pa. designed the chime construction and engineered drawings, and Carpenter Technology, Car Tech gave a $10,000 grant for the chime construction.
The Public Works Department include Director of Easton Public Works Dave Hopkins and Foreman of Easton Parks system Justin Weis.
Though the installation is currently in a good state, “there is a little tweaking left to do,” Toia said. “There are a couple of chimes that aren’t quite properly tuned, so we’re going to have to go back and fix those.”

Adding that the committee is currently trying to select “the proper mallets and [figure out] how we’ll attach them so they are permanently available.”

Music professor and department head Larry Stockton is currently planning on using the chime installation for the school’s Percussion Ensemble to play sometime near in the future.

Correction: This article originally stated that the chimes that Gossick worked on was called “Easton Elise.” It has been changed to be the accurate title of the set of chimes.