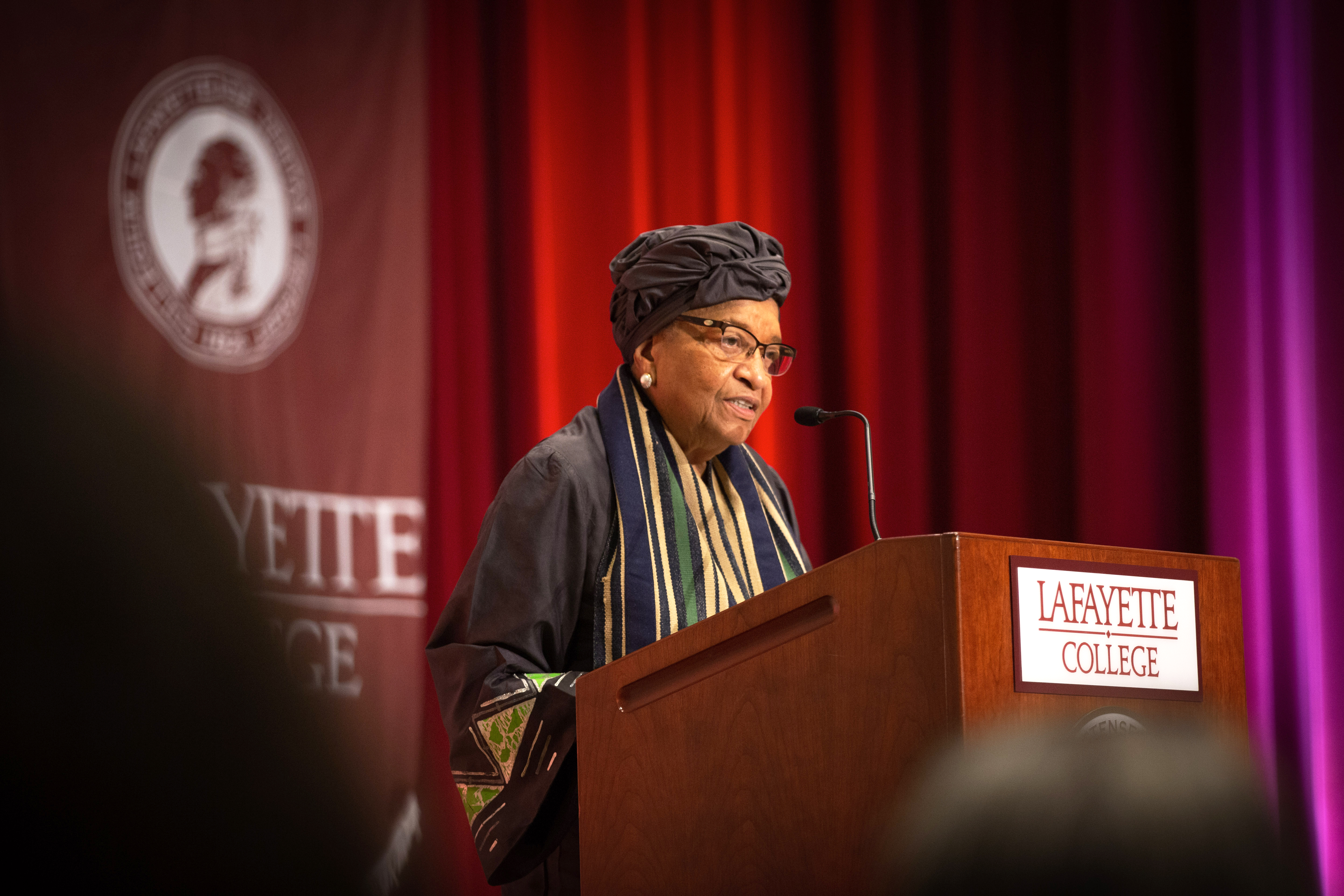 Ellen Johnson Sirleaf, former president of Liberia and Nobel Laureate, spoke about her time in office and creating peace in a previously war-torn country. (Photo courtesy of Lafayette Communications/Clay Wegrzynowicz)

Despite being exiled from her home country in 1985, Ellen Johnson Sirleaf returned to Liberia 12 years later with the mindset that her people wanted and deserved better and that she could make a difference in their fight for peace.

Sirleaf, the former president of Liberia and Nobel Peace Prize Laureate, spoke at Lafayette this past Tuesday, in celebration of the 60th Anniversary of International Affairs.

In front of a packed crowd of students, faculty members and alumni in Colton Chapel, Africa’s first elected female head of state discussed how she led economic, social and political change in Liberia, after its 15 year-long civil war and through its Ebola Crisis.

“There were many challenges along the way and some of the things we did, I would now change,” Sirleaf said. “However, as commentators and historians look back…I hope that they will draw out, amongst others, three of the priorities we made for our people: the value of giving useful skills to build a life for themselves and their families…the critical role of a vibrant civil service with strong institutions and…the importance of well-trained, apolitical and incredible security forces in a post-conflict state.”

Sirleaf’s administration accomplished these goals by prioritizing education, life skills and jobs for the younger generation. One way her administration did this was by creating the Economic Empowerment of Adolescent Girls and Young Women, a Liberian government program supported by the World Bank. The program provides women with life skills and training and supports their transition into productive work, Sirleaf said.

“By investing in young men and empowering young women, our administration took the crucial step in transforming some of the antiquated and traditionally-held gender roles and norms,” said Sirleaf. “We saw major indicators of that during our last election, when an unprecedented number of women ran for office.”

With her belief in the power of young people, she urged Lafayette students to think about what they can do in the coming years.

“The future belongs to you. Take it. Clean it. Use it,” Sirleaf said.

Esther Flavien ‘20 was inspired by her words.

“I think it was great how she challenged the students of Lafayette to not only be activists, but to also think about their impact on the world once they leave Lafayette,” said Flavien. “As a female student from Haiti, she made me think about how I could impact my community once I leave this school.”

After Sirleaf’s speech,  the chairman of the International Affairs Program, Professor von Wahl, moderated a question and answer session with her. Von Wahl brought up how Liberia has a troubled history with sexual violence and asked Sirleaf for her recommendations on how the campus should address the three sexual assaults and three rapes that have been reported so far this semester.

“It calls for continuing advocacy, sensitization, education, knowledge, exchanges and, when the code is violated, punishment,” Sirleaf said.

During her presidency from 2006 to 2018, Sirleaf’s government also transformed Liberia’s economy from a negative growth rate to, at its peak, a  9% growth rate, got the United Nations to lift its sanctions on the country so it could have access to international markets, built strong relationships with international communities, enforced equal rights for women and, in 2018, enabled Liberia’s first peaceful transfer of power to now president, George Weah.

“Of all of the other things we did, if we hadn’t sustained peace, then nothing would have been achievable,” Sirleaf said. “To go from 15 years of conflict to 15 years of peace has been my greatest accomplishment.”

Sirleaf said that Liberia has now raised a generation that does not know “violence or guns,” and An said that point “put all of the work that she accomplished into perspective.”

Throughout the evening, the college’s significant ties to Liberia were also discussed. President Alison Byerly noted in her opening speech that one of the college’s first students of color, David McDonogh was a Liberian colonist who later was a signer of both the Liberian Declaration of Independence and the Constitution of the Republic of Liberia.

“Having President Sirleaf here was very special because we have, as a college, a long history with students who went to Liberia and students from Liberia that come here,” Von Wahl said. “Her visit feels like a circle is closing.”

This talk was mostly funded by the Class of 1961 International Speaker Series, which annually provides an opportunity for members of the Lafayette community to listen to, pose questions to, and exchange views with policy-makers, scholars and other individuals whose line of work deals with important contemporary issues and ideas in international affairs.

“When we had our 50th reunion, my class decided that rather than donating a statue, we would create a lecture fund,” said Ronald Geesey ‘61. “For us, it is fantastic to be able to have this year as important of a speaker as President Sirleaf is.”

Update (11/1/2018): The headline of this article has been updated to reflect the printed version.