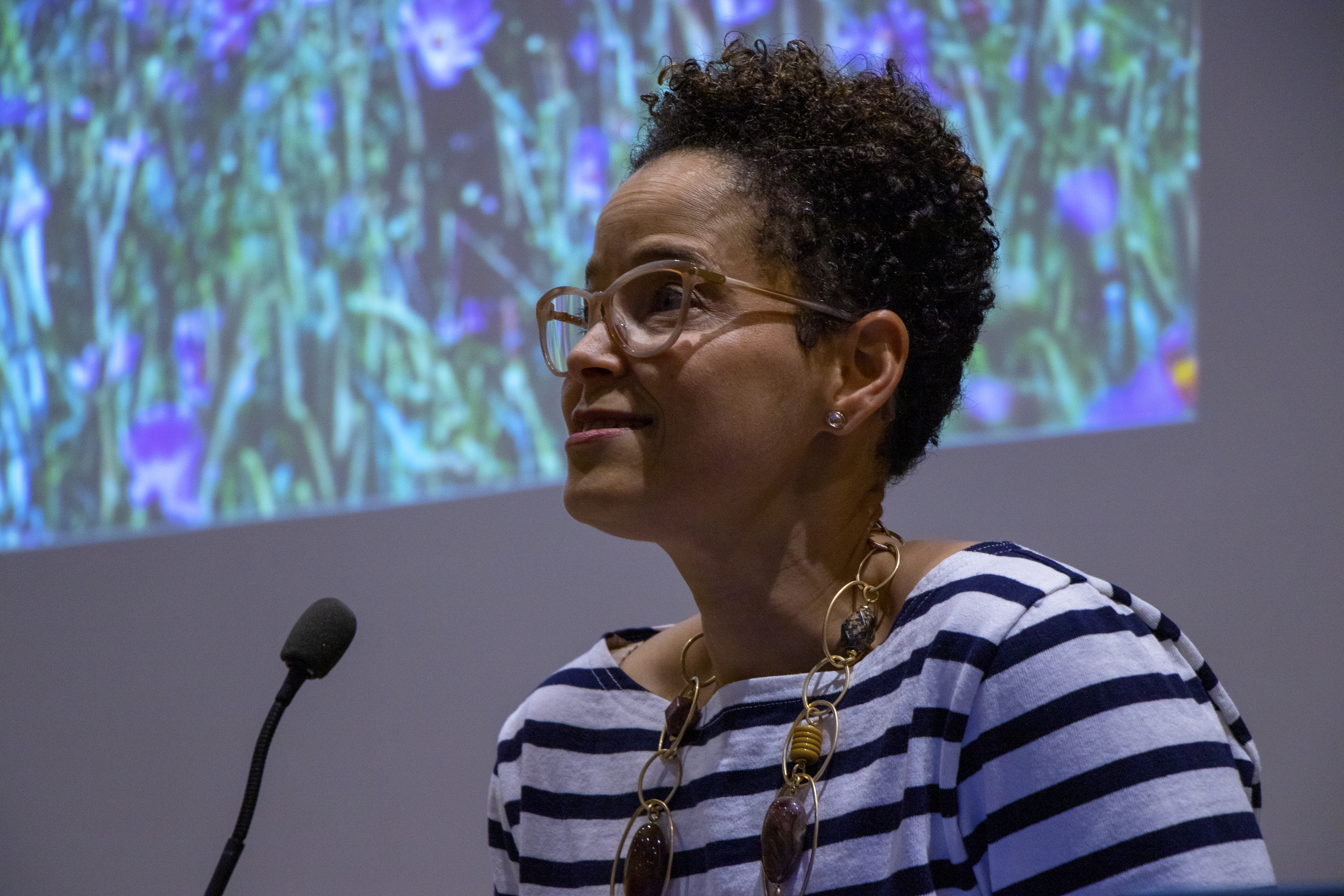 Erica Edwards takes an intersectional look at the effects of ‘the war on terror’ through African American literature and poetry. (Photo by Jess Furtado ’19)

When the “War on Terror” is discussed, conversations tend to circulate within geopolitical theory and focus on national security concerns, mass surveillance and the invasion of privacy rights, as well as democratization of the Middle East. African American literature and English professor Erica Edwards, however, looks at the War on Terror through the new lens of black feminist queer critique and questions how it has ushered in changes in African American literature and mold discourses on race.

This past Wednesday, Edwards, who teaches at Rutgers University, spoke about the intersection between the War on Terror, imperial violence, black feminist literature and language by investigating various pieces of black female literature and their varying levels of depiction of imperial and violent practices, such as policing and surveillance. Edwards’ lecture was a part of the Voices of Resistance series, which seeks to break new ground in scholarly discussion by encouraging new critical habits of thought.

At the beginning of her lecture, Edwards discussed several pieces of African American female poetry, memoirs and autobiographies. She said that in order to understand the language of the black female feminist author, a person must comprehend that author’s existence within what Edwards coins as “the long war on terror,” a global war shaped by imperial grammar that began in the late Cold War era started by President Richard Nixon and continued by President Ronald Reagan.

This “long war on terror” targeted what many neocon politicians believed were domestic terrorists, such as the Black Panther Party and the Black Liberation Army. Edwards referred to “The Color Purple” by Alice Walker, “No Higher Honor” by Condoleezza Rice, “1996” by Gloria Naylor and even recent shows such as “Scandal” created by Shonda Rimes as support for her overall argument. Edwards also mentioned her forthcoming book, “The Other Side of Terror: Black Women and the Grammars of State Violence.”

In the second half of her lecture, which was divided into two parts, “A Brooklyn Tale” and “ A Counterinsurgency Primer,” Edwards analyzed the works of June Jordan as examples of black feminist literature as a tool of criticizing the culture of American imperial grammar.

“A Brooklyn Tale” is the story of Jordan’s introduction to domestic war with the New York Police Department killing an unarmed Puerto Rican man and the police driving their squad cars into a crowd of peaceful protestors. Jordan became acutely aware of the relationships between state violence being waged against black communities, the Middle East and Latin America, and sought to remedy this “imperial grammar” through her poetry and plays.

“A Counterinsurgency Primer,” conversely, focused on Jordan’s 1983 trip to Nicaragua and how she utilized poetry to expose the racialized and gendered terms that the United States used to justify military intervention in Latin America and flip the imperial discourse from the invader to the invaded.

“It’s difficult,” Edwards responded. “This is a rep project centered on bringing people who aren’t talked about a lot. The one thing inspiring about Jordan, she focuses on terms people use to build a world. So to think beyond representation, we have to pay attention to how people in social movements invent new worlds. What if were to stop using the word  ‘leader’ or stop using terms that are gendered? We have to invent new terms to imagine new worlds.”

Edward’s lecture and responses offered a new, intersectional look into the effects of the war on terror, that students like Grayce Walker ’22 found informative.

“I think it was a very educational and super interesting talk. I found new authors and new texts that I want to look into. We need to continue having convos about black women, queer women, women in general, in academia and outside academic, because these voices often go unheard and it is important to have these conversations,” Walker said.

View all posts by Thalia Charles →