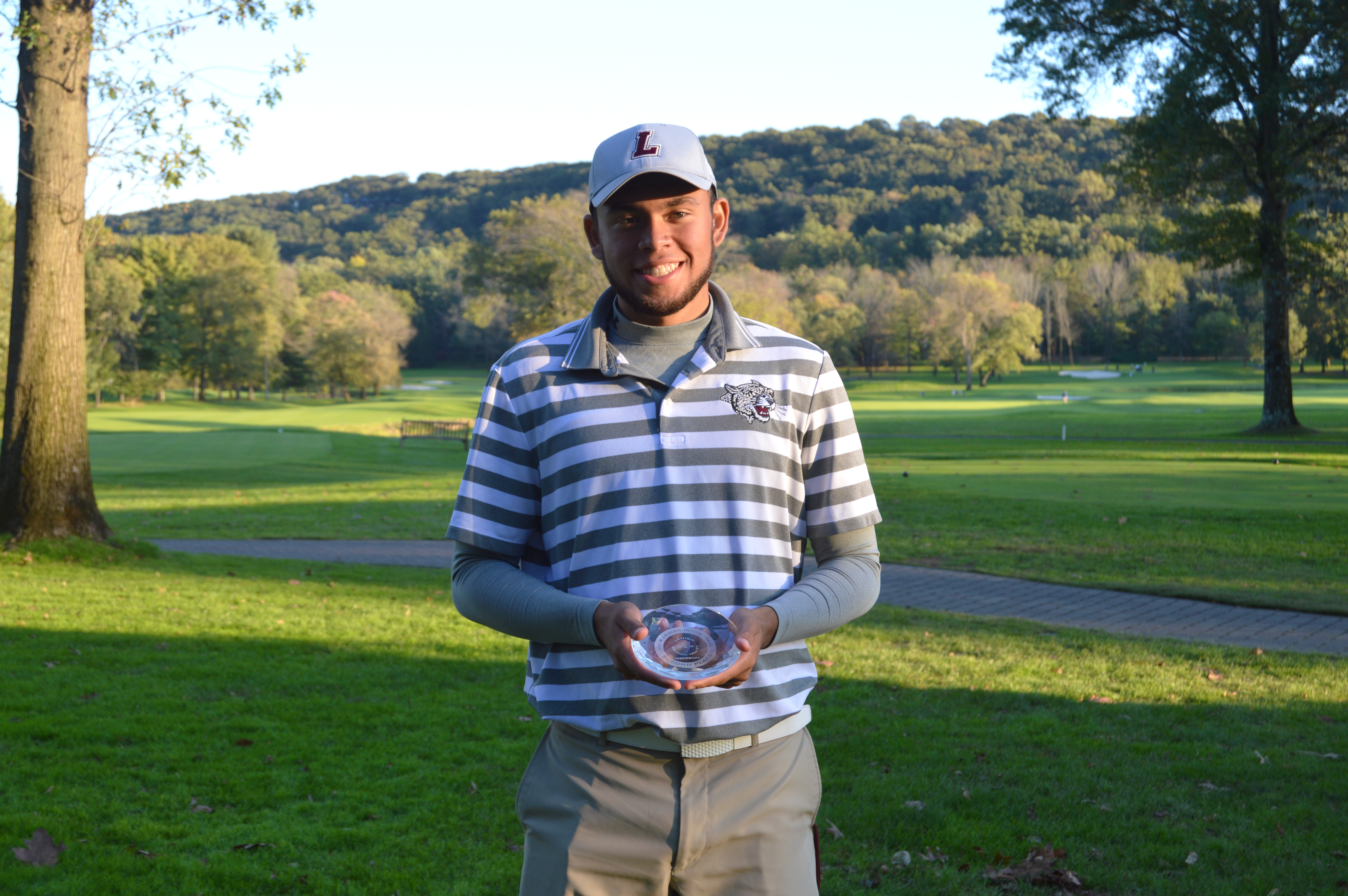 Sophomore golfer Cole Berger shot an even par on day two of the Lehigh Invitational to rise to T-2nd place. (Photo courtesy of Athletic Communications)

This week The Lafayette sits down with sophomore golfer Cole Berger.

Amy Hewlett: You began day two at T-11 [in the Lehigh Invitational], and moved up nine spots by the end of the day. What do you think was the key to your success on day two?

Cole Berger: I had my coaches with me for a lot of holes on day two, which helped me stay focused. One of the biggest things in golf is to keep your mental game, and to constantly check things likes the wind and where the hole is relative to the green. I also started out really strong, and I was able to get going early.

AH: What was the biggest challenge you faced this weekend?

CB: My biggest challenge this weekend was the weather. I don’t like to swing with a lot of clothes on, but it was pretty cold. I put on two Under Armours under my shirt to avoid wearing a jacket. The wind was probably the hardest part because it was changing directions. Normally, the wind is in a consistent direction, but it was swirling so I had to be ready for it to change randomly.

AH: What is your team’s biggest strength this season?

CB: Our youth, by far. We have four strong freshmen, Brendan (Cronin) and I are sophomores, and [Will Halamandaris] is a junior. Next year we won’t lose any of our strongest players, so we can just build on what we have.

AH: How has your team most improved since last season?

CB: We got a lot better with our course management. When you get into trouble, it spirals out of control. If you can avoid big numbers on trouble holes, your scores look a lot better. We’ve been doing a lot better this year managing that.

AH: How has your role on the team changed from your freshman to your sophomore year?

CB: Being a sophomore, I’m in better communication with the players and the coaches. I can relay messages from both sides and I think that has been especially helpful for our freshmen.

CB: Only six of us are going, and because of flight tickets our coach picked the players early on. I’m really hoping we can post some good numbers, and our goal is to finish top three.

AH: What will your team be working on until the spring, when they begin competing again?

CB: We’ll be indoor working really hard on things that really matter like short putts. We have a very nice putting set up at our indoor facility, which is great.

AH: What has been the most memorable part of your golf career in college so far?

CB: Winning [the Alex Lagowitz Memorial Invitational as a team], hands down. Going to sleep with a 19-point lead after the first day, knowing that was the best competitive golfing I’ve ever had, was amazing. With our team finishing last at a lot of tournaments last year, and then coming back and winning our first tournament this fall was the greatest feeling.

AH: For you, what is the toughest part of golfing at the collegiate level?

CB: The toughest part for me is staying focused. We played 36 holes in one day, and we don’t really take any breaks. You wake up at 6am, get to the course, warm up, play 18 holes, grab lunch in between the holes and then play another 18. You get tired, you get hungry, you get distracted. It’s easy to get distracted.

AH: Who is your biggest fan?

CB: My mom. She came down to watch me this weekend.

AH: When and how did you first get into golfing?

CB: I had three hip surgeries. My first one was in middle school and they told me I couldn’t do any contact sports for nine months. I had played golf before a little bit, so I played a few tournaments and then went back to basketball. After my second surgery, I was on crutches for about a year and I was out of sports. They told me no contact sports for the rest of my life, and I was forced into playing either golf or tennis. I had so much fun golfing and became obsessed so quickly. I played a few tournaments, got lucky and won a few, and ended up here.

AH: Do you have any pre-competition rituals?

AH: If you could meet any celebrity, who would it be and why?

CB: Kobe Bryant. I’d ask him about what drives him.