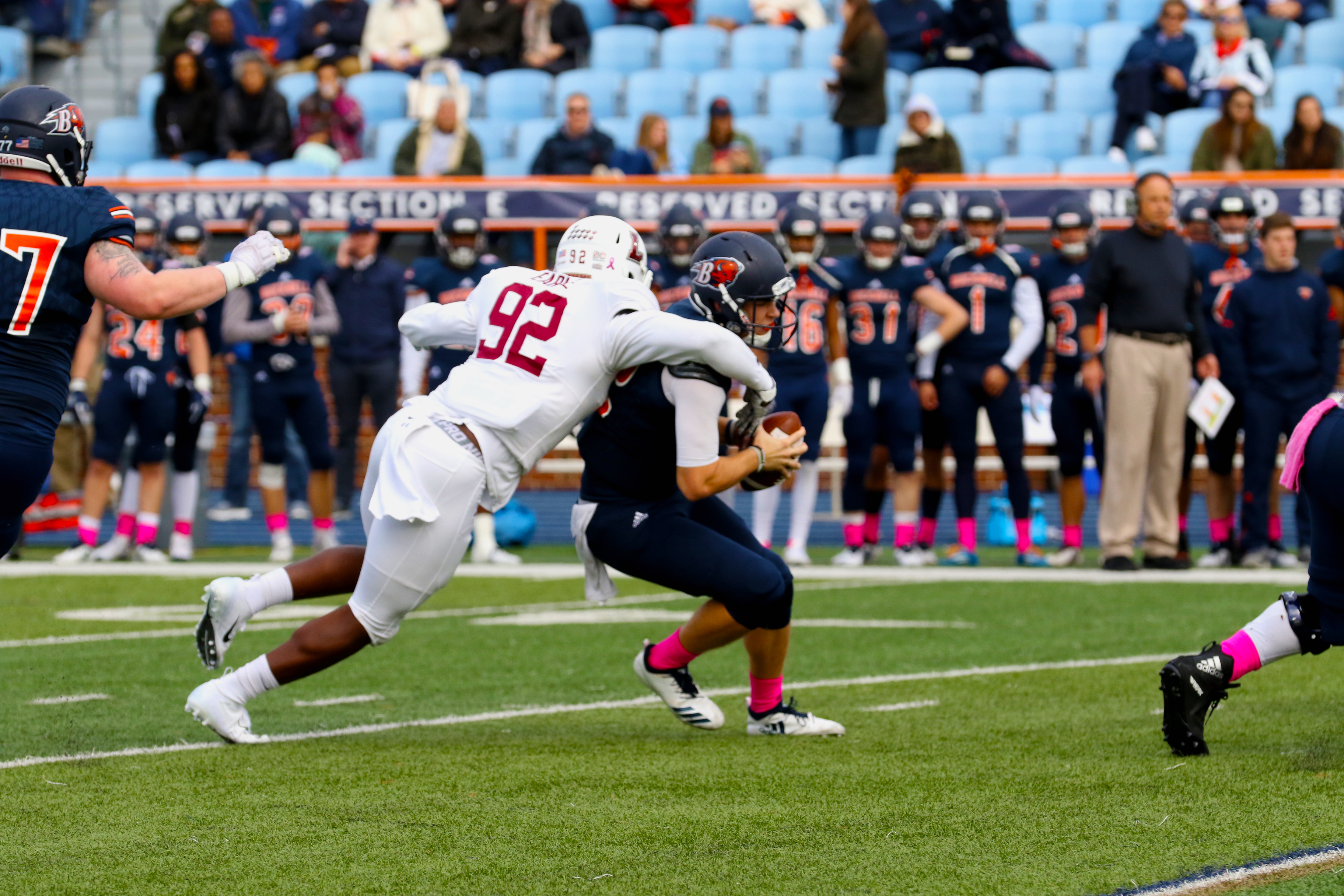 Football earned its first conference win of the season with a defensive stand during Bucknell’s final drive. (Photo courtesy of Athletic Communications)

Lafayette’s men’s football team defeated Bucknell 29-27 when they visited Christy Mathewson-Memorial Stadium on Saturday, Oct. 20. After trailing 14-7 at halftime, the Leopards scored two touchdowns in the third quarter, and then another in the fourth. The difference in the game would be a Lafayette field goal by sophomore kicker Jeffrey Kordenbrock with seven minutes and eleven seconds left in the fourth quarter.

The Leopards controlled the pace of the game, possessing the ball for over 35 minutes, compared to the Bison’s 24 minutes and change. Lafayette finished with 338 total yards, while Bucknell had 292 total yards. On the ground, Lafayette had a season-high 134 yards as well as three rushing touchdowns.

“It’s really about execution,” head coach John Garrett said. “It’s really been the same plays since we got here. The line just did a really good job of controlling the line of scrimmage, sustaining blocks, and the backs were really patient in pressing a hole. A lot of the gains we had were cutting up, pushing defenders past the hole because they are a very fast, over-pursuing defense.

“[Junior running back Mike Dunn] showed really good patience on his runs to press the hole and there was some great examples of backside offensive linemen sustaining their blocks past the opposite hash and into the numbers,” he added.

Dunn was the hot hand for Lafayette as he rushed for 38 yards and a touchdown on just seven attempts for an average of almost six yards a carry.

“[Running backs senior CJ Amill and sophomore Selwyn Simpson] usually start the game off, switching off series,” Dunn said. “I usually get a series and see if I can get going a little bit…It’s really whoever has the hot hand, as that’s how we have been playing all year.”

The Leopards bounced back a few times in the game, including after sophomore quarterback Sean O’Malley threw an interception that Bucknell ran back for a touchdown, and missing two tries after touchdowns that would have tied the game.

“This game was a great example of perseverance and mental toughness throughout the game, which we talk about all the time,” Garrett said. “We trailed four times in the game and there was this air of confidence that it did not matter. What we talk about a lot is to do your best regardless of the circumstance and to continue to embrace the challenges in the game.”

The Leopards will travel to Fordham where they face off with the 1-6 Rams at 1 p.m. tomorrow.