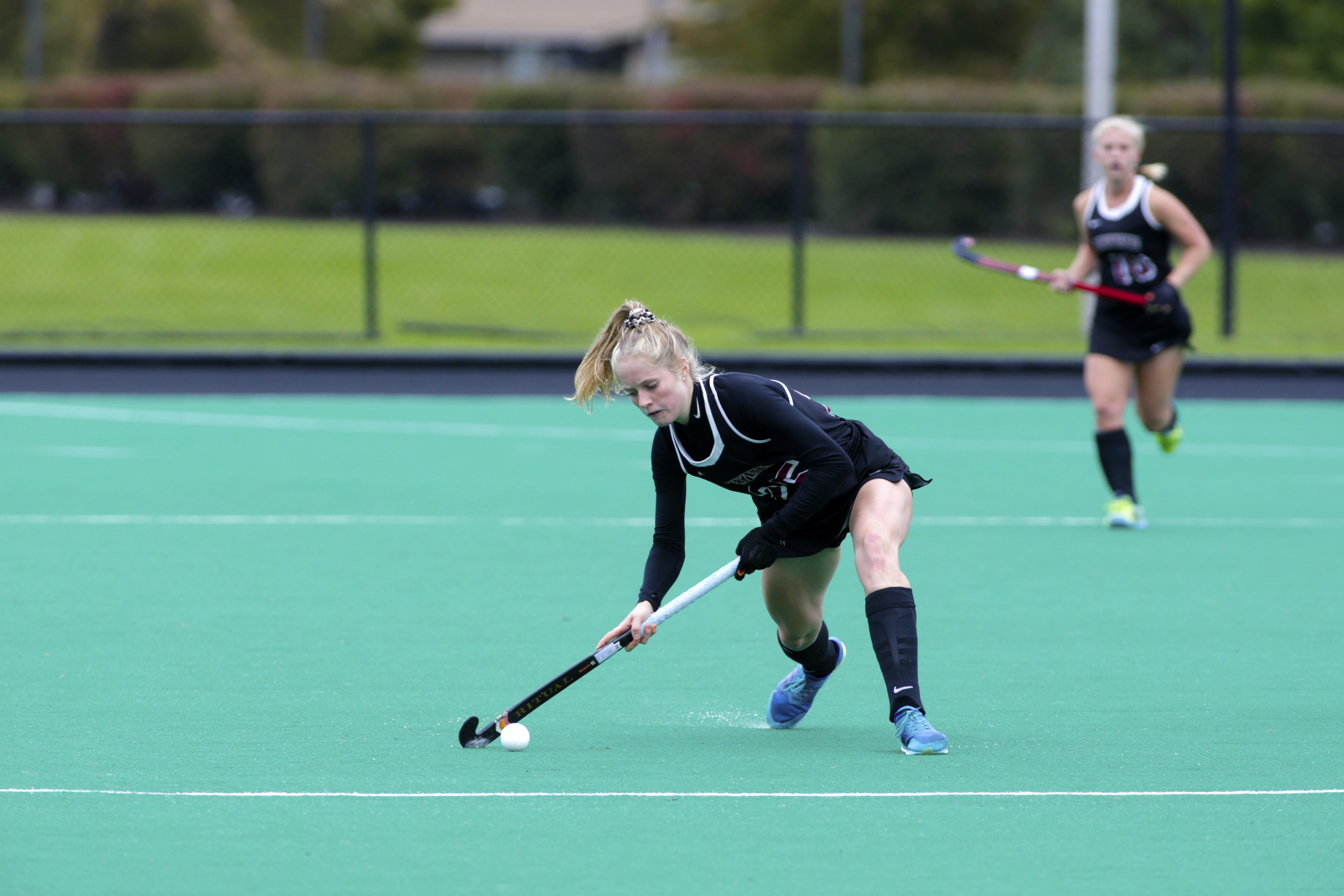 Field hockey clinched a playoff spot after missing the tournament in 2017. (Photo courtesy of Athletic Communications)

With the potential to clinch a spot in the Patriot League Tournament on the line, the team delivered, beating American 3-1. The Leopards then went on to overcome the pesky Cornell team in double overtime 2-1 in a non-conference matchup.

The first 32 minutes of the American game appeared to be a defensive affair, with both teams tied, 0-0. Junior goalie Sarah Park saved one shot on goal while another American shot was blocked by the defense. Lafayette ran into similar offensive issues, until the 33rd minute, in which freshman forward Molly McAndrew broke the tie with a goal off of senior co-captain, Theresa Delahanty’s, assist.

In the second half, Lafayette came out aggressively, taking three shots, two on goal, before McAndrew was able to convert and score in the 50th minute. Lafayette continued to outpace American, when in the 56th minute, Delahanty was able to chip in a goal off a rebound, over the goalie.

“I ended up on the ground somehow, with the ball in the cage, we didn’t really know who had scored it but it didn’t matter,” Delahanty said. “Our attack penalty corner unit talks about being able to get those types of rebounds, being scrappy, and putting the ball in the air if the [goalkeeper] is on the ground, so being able to execute the stuff we talk about and work on in practice is really nice.”

With a 3-0 lead secure, Lafayette’s defense smothered American. Park recorded four saves in the final five minutes, with senior defender Rachel Bird coming up with two clutch defensive saves. American would ultimately score in the 70th minute, but it was too little too late for their team.

“It means a lot [to be recognized],” McAndrew said. “It’s taken a lot of hard work and it great to be able to perform that way and for the team to be able to be able to get the win, and I’m really proud of that.”

Having defeated American, Lafayette traveled to Ithaca to take on Cornell. Cornell came out in the first half and was able to score Park off of a blocked shot rebound in the 34th minute. Cornell would retain their 1-0 lead until the 53rd minute when Bird was able to fire off the equalizer out of the corner penalty, off the assist from junior co-captain defender Lisa van der Geest.

With the game tied, both the Leopards and Big Red would be held scoreless for the next 29 minutes before junior forward Sam Di Mao scored the game winner in double overtime. Di Maio’s goal came from a rebounded shot from sophomore forward Grace Angelella.

“[The win against Cornell] definitely shows that we’re not going to be 100% all the time, but that we can still generate an outcome like [the win],” said Delahanty. “We just have to put in the work, and put in the effort to overcome the errors that happen. We know as a team, that we are able to overcome errors that we make ourselves, and still get our desired outcomes, and that’s something we couldn’t have really said in the beginning of the season, but now it’s something that I have a lot of faith in our team to do.”

Lafayette will close out the regular season with a trip to Lewisburg to face Bucknell on Saturday, Oct. 27. With a win, Lafayette will clinch the second seed for the Patriot League Tournament, while a loss would result in third or  fourth seed depending on the result of Colgate vs American.