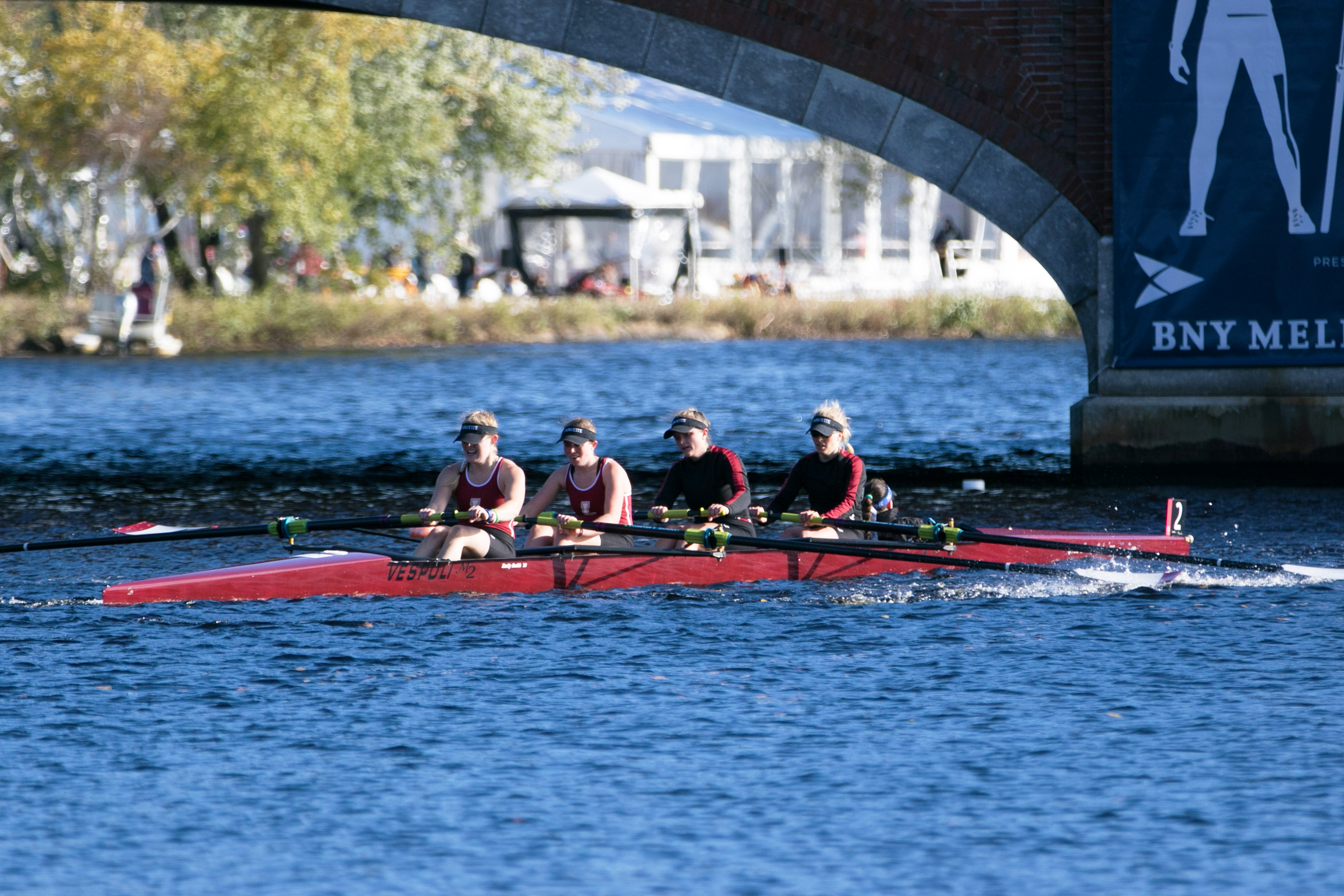 The women’s four-boat faced 20mph winds at the Head of the Charles Regatta, taking 10th place in a field of 40. (Photo courtesy of Hana Isihara ’17)

The Lafayette club crew team turned in a strong performance despite tough conditions at the Head of the Charles Regatta in Boston, Mass., as the women’s four-boat of senior women’s captain Zoe Bremier, senior Lillian Kennedy, junior Cameron Cranley, senior Rachel Marbaker, and sophomore coxswain Molly LaPoint finished in 10th place on Sunday, Oct. 21. By finishing in the top half of the 40-boat field, Lafayette earned an invitation back to next year’s race for the second straight year.

Although the team was hoping to finish with a medal, they persevered through strong and unpredictable 20 mph winds on what is already an extremely technical course, according to Bremier.

“We took a power 10 [ten hard consecutive strokes] and our boat actually stopped moving because the wind was so strong,” Bremier said. “By the time we reached the last 500m we had pulled away from the pack considerably and were just fighting the wind until the finish.”

In addition to the difficult course conditions, the team got a chance to row against competition they don’t usually see during the regular season. The boat was gaining ground on the New Hampshire (UNH) boat as they crossed the finish, according to Bremier, and the UNH boat has won the race the past two years. Other strong competition included Wesleyan, Trinity and the University of Florida, who Lafayette defeated, as well as the Florida Institute of Technology, who won the regatta.

Lafayette was one of three student club teams, as the other squads were varsity scholarship programs from around the country, according to head coach Rick Kelliher.

After the weekends’ result, the team looks to focus on refinement and recovery as they continue to prepare for the spring, their main competition season. The fall is an opportunity to test out new combinations and solidify technique, as well as a chance to regain fitness lost over the summer months, according to senior Nicole Harry, the crew team president.

“A constant theme for the fall season is shaking out any kinks and finding the strongest boat groups we can,” Harry said. “The plan is to build on the foundations laid at Navy Day and the Head of the Charles and start refining our work.”

Looking forward, the Leopards turn their focus to the Head of the Schuylkill regatta in Philadelphia, Pa., tomorrow. The team will face stiff competition, as powerhouses UPenn and Army will be racing as well as other division one programs such as Temple, Drexel, and St. Joseph’s. Both the men’s and women’s team will race their eight-boats, Bremier said, and she anticipates a strong finish for the men’s boat, which has been training hard for the past two weeks without a race. Despite the competitive matchups, Kelliher said the team hopes for a top-10 finish.

All of the support and strong work ethic have put the Lafayette rowing program on the map, Kelliher said. The team has experienced increased interest in the past two years, and continues to gain recognition across the country.

“We have over 25 recruits applying to Lafayette [who] if accepted, are planning on rowing,” Kelliher said. “This is a reflection of our continued success and the active recruitment efforts from my assistant coach Derek Richmond, who is now in his third season.”

The athletes will have plenty of encouragement as they continue their training and upcoming races, as the tight-knit program has a strong support system wherever they go.

“A lot of the rowers who weren’t able to make it to [the Head of the Charles regatta] held a ‘viewing party’ and all got together to watch the livestream,” Harry said. “It’s amazing to have such a strong system of support from the team even when rowers are competing from more isolated events. I just love the camaraderie of this team.”

So proud of this team! Awesome result and spirit, establishing traditions and reputation! Lafayette Crew “punches above its weight” again!!
(Parent of Ryan Coulson ’18)

They do indeed! Very excited to continue covering this team in the future. Their story truly is unique.

The WV4+ has a long tradition of achievement, going back, at least, to the c.1993 Competitiveness Program.

The Crew Team came up with this written commitment and training program, because they need to get above a cusp of performance to win medals, . . . , and, incidentally to beat Them, who rowed somewhere up the Lehigh River.