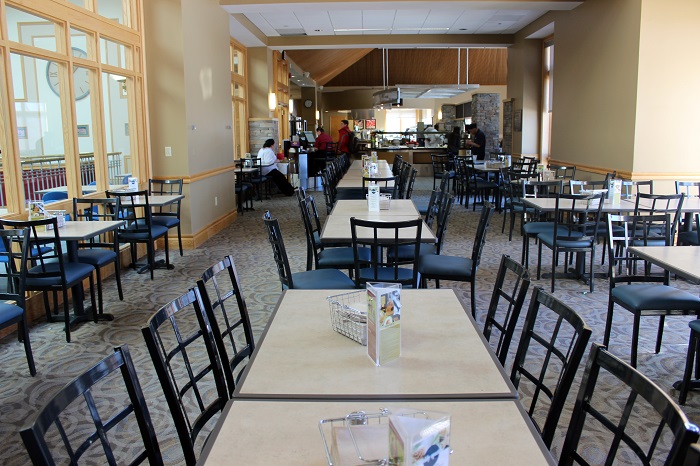 With just over 500 students registered on campus for fall break, dining halls had limited hours and food options.

Lack of food availability and transportation options were two challenges students who remained on campus this fall break said they faced. Fall break, which gave students off classes Oct. 8 and Oct. 9, is a time when hours and services are shortened due to much of the student body returning home for the long weekend.

For many Lafayette students, about 500 of whom were registered to stay for fall break, leaving over the break simply isn’t an option due to financial reasons, workload, jobs or because of where they live.

For students on campus last Sunday to Tuesday, the limited hours and food selection in Upper Farinon left many with limited access to meal services, and the missing shuttle service meant that students were confined to campus unless they resorted to other forms of transportation.

Only the Upper Farinon dining hall was open, with its hours from 10 a.m. to 2 p.m., and then from 4:30 p.m. to 6 p.m. Some students found themselves either adapting their meal schedule to accommodate the altered dining hall schedule or were forced to buy food off-campus.

“We’d wake up late, but then there was really no food at Upper,” Alex Ruiz ‘22 said. “After that, we had to spend money on food for the rest of the day.”

“Especially the first night of break when everyone was leaving, literally everything was closed and I had nothing to eat,” Junise Nixon ‘20 said. “I had to go to Wawa to get food.”

In addition to the inconvenience the dining hall schedule created, students also felt that the quality and selection of food was significantly reduced, despite the fact that the meal plan pricing remained the same over the break.

“Literally all I had every day was cereal [at breakfast],” said Ruiz.

“Overall I think the situation over fall break highlighted the fact that the college assumes that you have money and that you’re willing to spend it on food off campus,” Makaela Finley ‘21 added.

The limited food selection especially affected those with dietary restrictions, whose options are already limited under normal circumstances.

Ride Systems, an app showing the schedule of the Lafayette shuttle bus, showed the buses circulating to their stops but they never actually arrived, according to Elle Cox ’21 who was waiting at Easton Bus Terminal for the shuttle on Sunday, Oct. 7, and watching the app. When the bus she was waiting for never arrived, she called Public Safety, who told her that shuttle wasn’t running over fall break.

“There was no shuttle service” on Saturday, Oct. 6, Sunday Oct. 7 or Monday Oct. 8, “as indicated on the shuttle schedule. Service re-started” on Tuesday Oct. 9 “with the Special Shuttle (bus terminal/airport),” Director of Public Safety Jeff Troxell wrote in an email. He added the shuttle was in full service on Friday Oct. 5.

“Not having the shuttle running on campus during this break essentially traps anyone without a car on campus,” said Finley. “It’s a bit presumptuous to assume that some of us who are low-income and live far away would pay to fly home for such a short break, and even people who live closer might not have the means for the gas money.”

This was not the first time that students have been inconvenienced in this manner. Olivia Grigaux ‘19 described how, during senior week of 2017, there were no dining options open starting on the Friday at the end of finals week. If she hadn’t been able to get a ride to go grocery shopping, Grigaux said, she would have been left without food.

Although issues occurred this fall break, Lafayette has been attempting to incrementally improve the conditions for students who stay. Up until last year, the meal plan was not even offered over short breaks. The Lafayette administration was able to offer the meal plan without burdening students who stayed with the additional cost of keeping the dining halls open, but recognize that it is still a work in progress.

“Operating the larger dining halls (and with the full range of options) with a fraction of the students who usually utilize them is very difficult to balance in terms of the potential costs to students,” Annette Diorio, Vice President for Campus Life, wrote in an email.

The increasing student population and the number of students who stay over short breaks makes it ever more important to address the concerns that students have.

“We have made a number of changes to help students be more comfortable over breaks,” Diorio added.

Diorio recommended that students engage with Student Government to address some of these issues, as well as to ensure they sign up for break housing. According to Diorio, around 500 students registered for housing this past fall break.

“We can’t make good decisions about resource allocations unless we know how many students we are impacting,” she said.

Many of the students who stayed over this fall break had recommendations and requests for the school to consider that would improve their break experiences in the future.

“My thing is just having more options [for food],” Ruiz said. “Every now and then, putting out new food so that it is fresher. I don’t want to eat old scrambled eggs every day.”

“Maybe [add] a special shuttle that goes into town, or down to Wal-Mart,” Nixon added.

Lafayette does offer programs for international students, but students who couldn’t go home for other reasons reported feeling especially singled out over the break.

“[We should be] having things going on so that people don’t feel homesick, something to do to keep your mind off of that,” Ruiz added.

“[The school] needs to be considerate of other student’s circumstances,” Nixon added. “A lot of people can’t go home, they’re international students, or they simply just can’t afford it.”

Elle Cox ’21 is the photo editor of The Lafayette. She did not edit the content of this article.