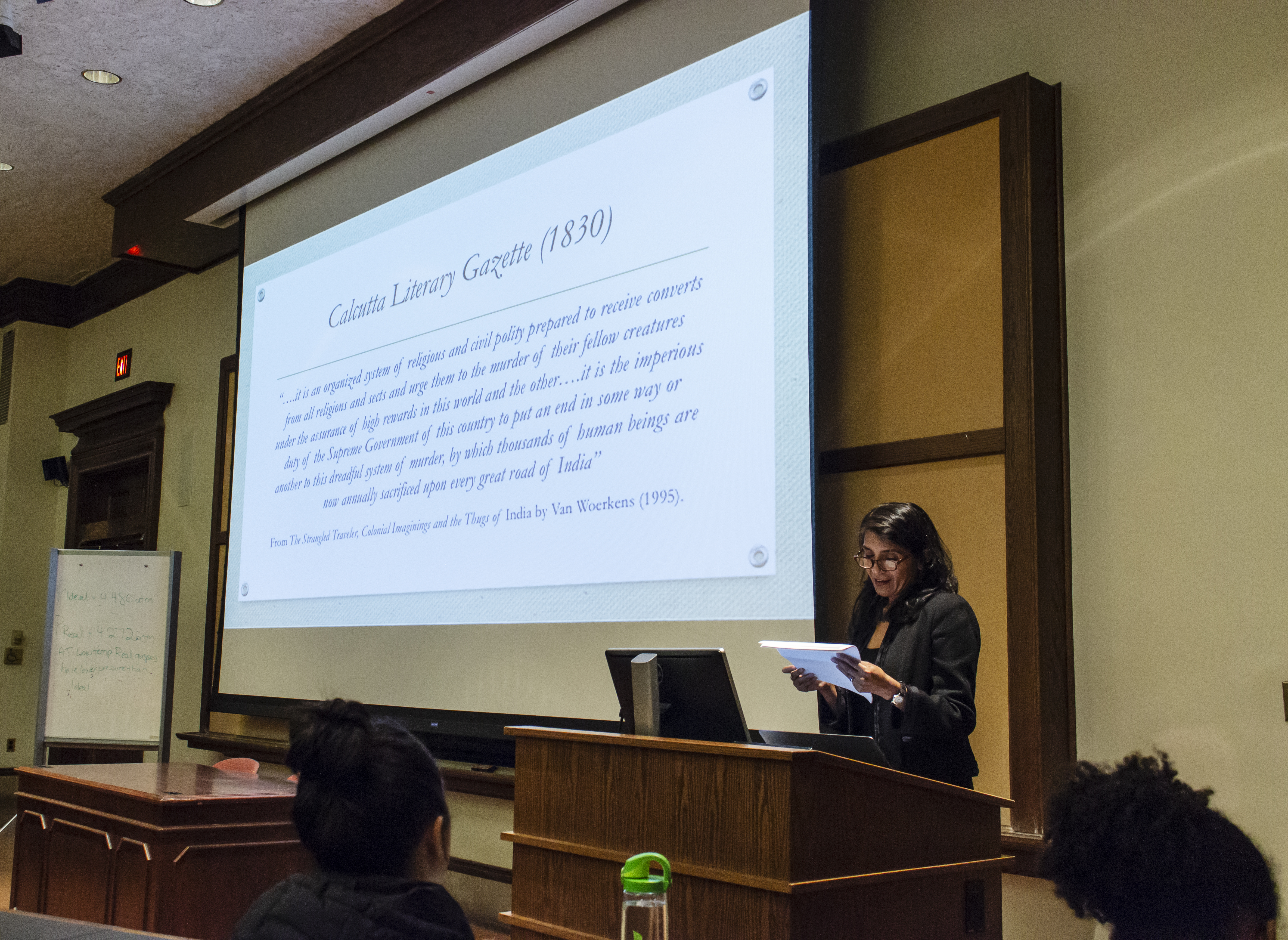 Nandini Sikand, this year’s Jones Faculty Lecturer, spoke about the portrayal and evolution of the “thuggee.” (Photo by Emily Cardenas ’22)

While the concept of the “thuggee” has a long, historical background, film and media studies professor Nandini Sikand said the effects of the media have repurposed the term as a name for young men of color.

This past Tuesday night, students, staff and community members gathered to hear Sikand discuss the historical and current meaning of the thuggee, and the media’s representation of it in the last decade. Thomas Roy and Lura Forest Jones Faculty Lecture and Awards Fund, established in 1996 in order to recognize great teaching and scholarship at Lafayette College, sponsored the lecture.

The thuggee historically refers to groups of travelers in the Indian subcontinent over a period of about 600 years. The thuggee was portrayed for centuries as a murderous Hindu cult. Sikand said portrayals of this group focused on their emphasis to the Hindu goddess Kali and felt they were serving Kali in their work.

While the first recorded mention of the thugee was in 1356, when thuggees from India would rob travelers and traveling parties, the concept of the thuggee became significant in popular culture in the 1830s. It was that decade in which the ordinary thug became a certain kind of criminal, after a publication in the Calcutta Literary Gazette in 1830 used thugs to justify a colonial expansionist policy.

Sikand spent the second part of the lecture discussing films from the 1900s and 2000s that reference the thuggee. She showed a segment of the films Gunga Din (1939), The Stranglers of Bombay (1960) and The Deceivers (1988). These, she said, depicted the thuggee in a stereotypically violent manner.

One notable film including the image of the thuggee was Indiana Jones and the Temple of Doom (1984). The movie displayed stereotypical eroticism and sexuality of female characters, and the consumption of monkey brains.

Today, Sikand said, thug is often translated to mean gangster or criminal. She also said that the word “thug” is simply a socially acceptable way of using the N-word. Sikand referenced the rapper Tupac’s tattoo on his abdomen stating “THUG LIFE” as a way to reclaim the word for himself.