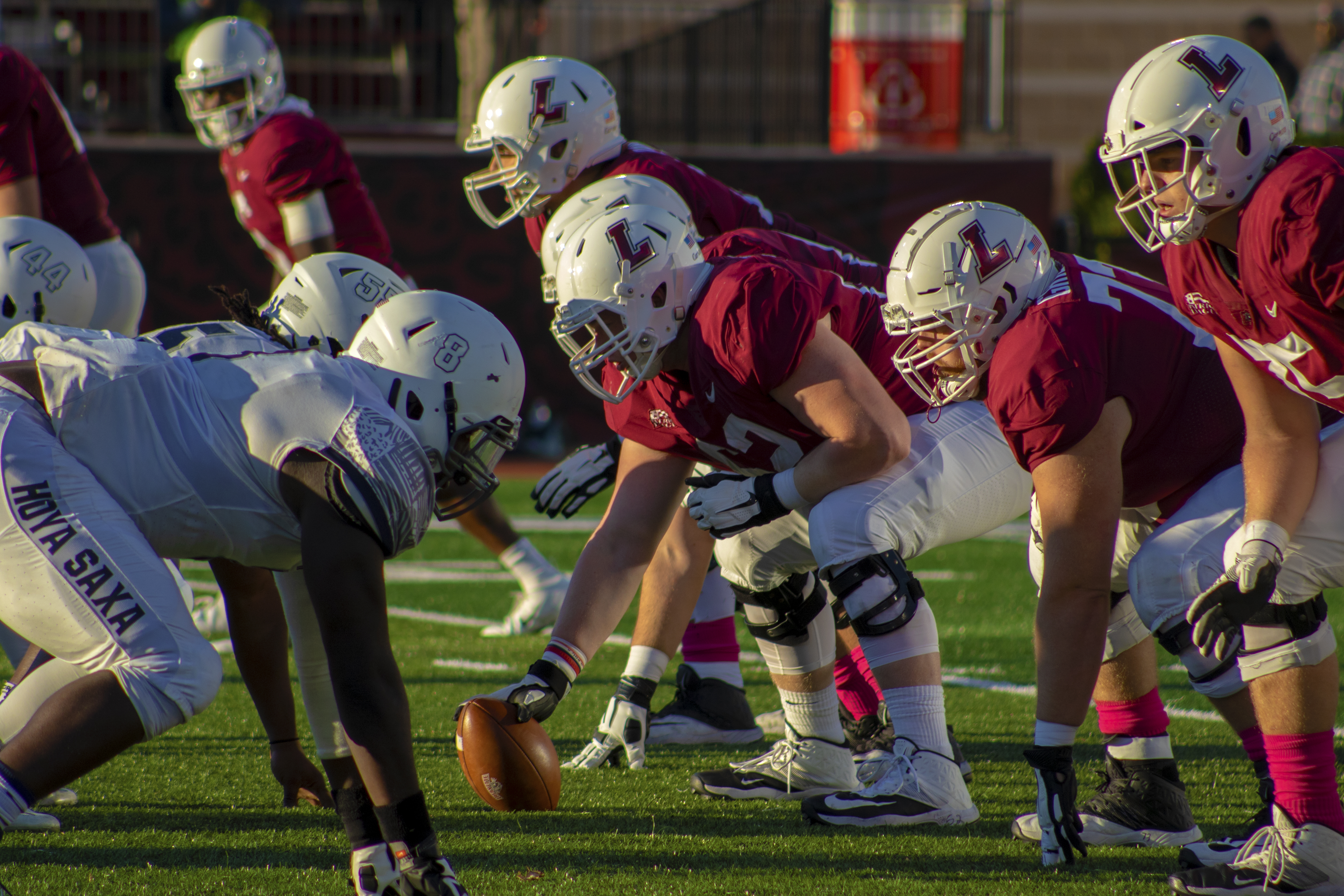 Football dropped a close game against Georgetown, moving to 0-2 in conference play. (Photo by Jess Furtado ’19)

The Leopard’s football team lost to Georgetown 13-6 in their homecoming game on Saturday, Oct. 13. It was a hard-fought contest with an onside kick recovered by Lafayette senior kicker, Jacob Bissell, and a Lafayette defense that let up no points in the second half. Offensively, Lafayette’s only points came off of a pair of field goals, one at the end of the second half and the other coming in the final 30 seconds of the game.

Sophomore quarterback Sean O’Malley lead the passing attack with 250 yards, completing passes to seven different receivers despite throwing three interceptions. The Leopard defense gave up two touchdowns in the first half before shutting out Georgetown in the second half, forcing seven three-and-outs.

The offense was able to put together of a couple of prolonged drives that ultimately fell apart due to turnovers or penalties.

“It’s always frustrating when we get so close but we can’t finish [the game].” freshman tight end Steven Stilianos said. “We gotta keep working on getting explosive plays, executing the game plan and it’ll be there. We just got to keep working and doing what the coaches tell us.”

Junior receiver Nick Pearson was a key factor in keeping the offense moving during the Lafayette drives. Pearson registered career highs in catches and receiving yards with 140 yards on 10 catches. However, Pearson said he wasn’t satisfied with his performance as the team couldn’t earn the victory.

“The most important thing is the win,” said Pearson. “It’s nice to have a good game but it’s a team sport. So you really want to come out with the win.”

At the start of the third quarter, the Leopard kickoff unit attempted and recovered an onside kick which gave the offense great field position around the midfield to start their second half drive. It was Bissell who recovered his own onside kick.

“The decision to [go for the onside kick] came from the plan for Georgetown,” head coach John Garrett said. “We look every week to see if the front line leaves early, and if they do then they leave themselves vulnerable for a bunt onside kick. They had [left early] so we planned to do it. [The start of the half] was the best time to do it and…Bissell on the coverage team executed it very well.”

The team continued its aggressive start in the second half by staying on offense for the ensuing fourth down, which they failed to convert. It was a risky call, as it gave the good field position back to Georgetown, but the Leopard defense was up to the challenge, shutting out the Hoyas the rest of the way. After giving up 111 yards and two touchdowns in the first half, the defense smothered Georgetown in the second, giving up a mere 30 rushing yards, 41 passing yards and zero points.

“Our coaches really put a fight into us during halftime,” said freshman defensive lineman Malik Hamm. “First half we really didn’t come out with a lot of energy or effort. Without effort we look like we did during the first half.”

Hamm was recently named to the Jerry Rice Award Watch List, which is given annually to the “most outstanding freshman player” in the FCS. He continued his excellent season with a career-high nine tackles, including a sack and a forced fumble.

Lafayette travels to Lewisburg, Pa., to take on the Bucknell Bison this coming Saturday in a Patriot League matchup.

“[On offense] we’re going to eliminate penalties, secure the ball, and create explosive plays,” Garrett said. “When you play with that formula, you become hard to beat, and that usually results in a victory.”

“And it’s the same thing on defense: take the ball away, and prevent explosive plays. When you don’t do that, you’re easy to beat and that’s what happened [against Georgetown]”.

The Leopards will travel to Bucknell on Saturday, October 20th at 12.