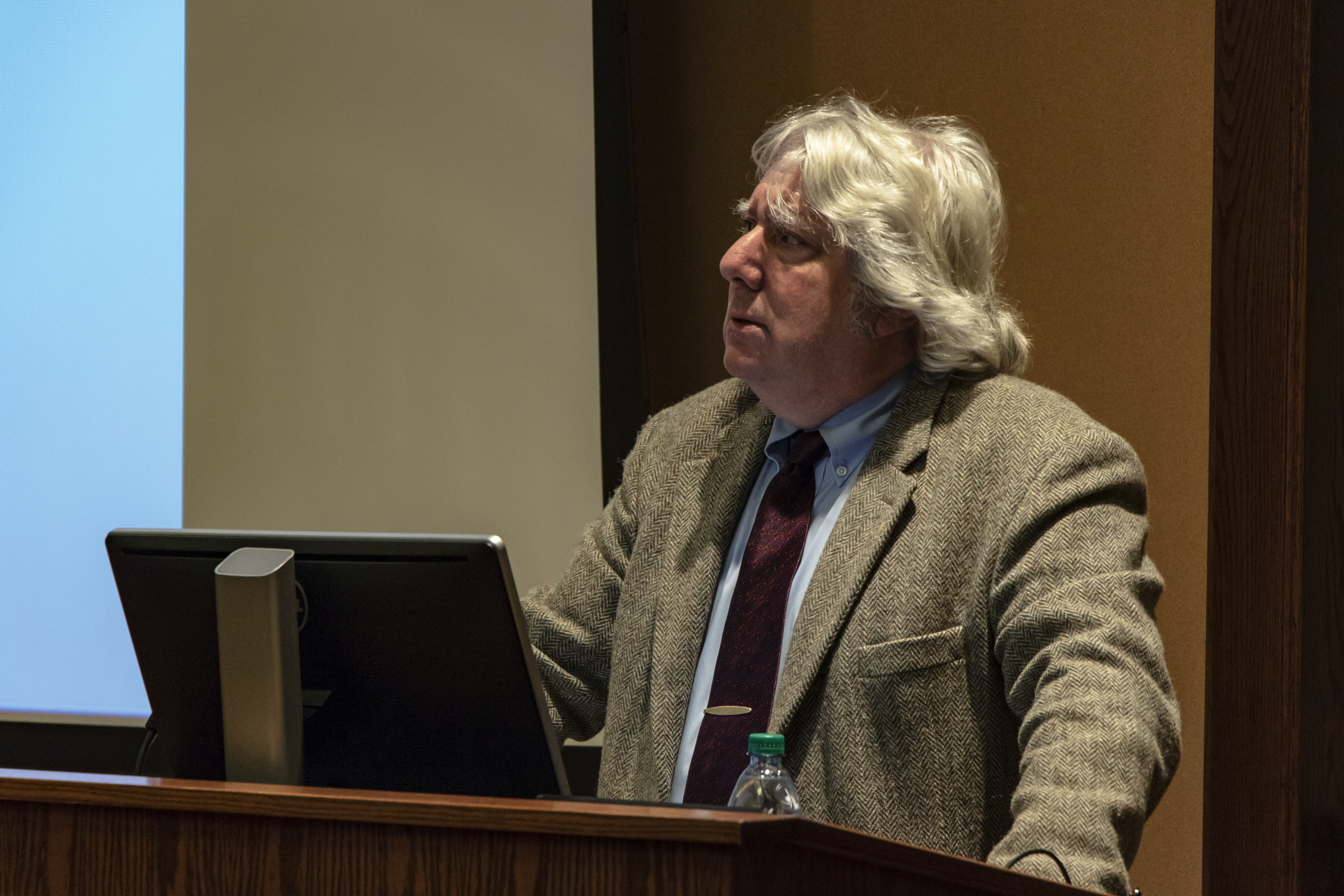 Professor Robert Braun spoke about African prophets in a talk on Wednesday. (Photo by Jess Furtado ’19)

“The mere fact that I am talking about African prophets challenges a lot of the standard knowledge about African religions,” said Dartmouth College Professor of Religion and African-American Studies Robert Baum  to start off his talk on Wednesday.

After receiving a degree in African History from Wesleyan University, Baum spent a year in a Jola village in Southern Senegal. The Jola, or Diola, are an ethnic group currently living in Senegal and Guinea-Bissau. Baum’s initial visit to this village prompted his graduate research at Yale University and a two-year return trip to Senegal.

Upon learning the local language and studying Jola records, Baum came to understand the deep history of prophets within the Jola people and how French colonization came to reshape their identity.

The popular Western perception dating back to early European explorers and continuing into today’s leading textbooks is that Africa is a continent without history or religion, outside of European influence, according to Baum. Even those who believe that Africa has a cultural religion claim it lacks a “supreme being,” resembling God or Allah, he said.

Baum refutes the myth that African cultural religions do not have “supreme beings.” He labels African religion as monocentric, claiming that at the center of each African tradition you will find a supreme being who is believed to have begun the process of creation. Emitai, the Jola supreme being, is believed to control disease, and most importantly, rain.

Emitai’s influence as the foundation and center of the Jola religion is most clearly defined through the history of prophets, which Baum focused much of his research on. These prophets provided a direct link between Emitai and the Jola people, according to Baum. “God sent them,” is the English translation of the Jola word for prophet.

Baum points out that this directly conflicts with the text from the most widely read textbook on African Religion, which claims that there are no prophets in Africa who act as “mouthpieces of God.”

Baum breaks down the roles of these prophets within the Jola society by closely examining the work of three: Kooliny Diabune, Alandisso Bassène and Alinesitoué Diatta.

Diabune, who is one of the fifteen known male prophets before colonization, was active during the height of Atlantic Slave Trade. Diabune was important in establishing the ability of African supreme leaders to exist on a macro and minor scale, breaking the standard Western dichotomy of minor and major religious figures.

Following Diabune and French colonization, the identity of prophets shifted from men to women. Baum attributes this shift to the damage colonization had on masculinity. The men of Jola, and more broadly Senegal, were seen as weaker as they were unable to protect against the Europeans, allowing for the status of women to expand throughout the 19th century.

Bassène was a female prophet who spoke out against the corruption within Jola villages and offered protective rituals to prevent against the spread of influenza.

Diatta was another female prophet who was able to guide the Jola out of years of drought by performing rituals and reestablishing a sense of egalitarian community. In line with many major religions, Diatta also established a Sabbath, but instead of it being a rest day for people, it was a day of rest for the land.

Both women were devoted to maintaining the traditional Jola ways, avoiding Western products and clothing. When the French told the Jola to grow peanuts, hoping to turn a large profit, Diatta refused, saying it disrupted the people’s relationship with the land that they had been growing rice on for decades.

Afraid that she may incite a revolution, the French exiled Diatta under the claims that she attempted to prevent colonization and embarrassed the French colonizers. Baum drew a parallel between Diatta’s story and the biblical telling of Jesus and Pontius Pilate.

Baum work has culminated in a series of books on the topic of Jola prophets, his most notable one being “Shrines of the Slave Trade:  Diola Religion and Society in Pre-Colonial Senegambia,” which won a prestigious American Academy of Religion award for the best first book in the history of religions.

Baum shared that his future book will be working with current living prophets in Senegalese Jola villages. Baum hopes that through his work he can establish that African is a continent rich in history and religion outside of European influence, despite what popular historical literature still holds as true.

Correction: This article originally spelled Robert Baum’s name incorrectly. It also indicated the wrong fields in which he is a professor. It has been changed to show the accurate spelling and fields.