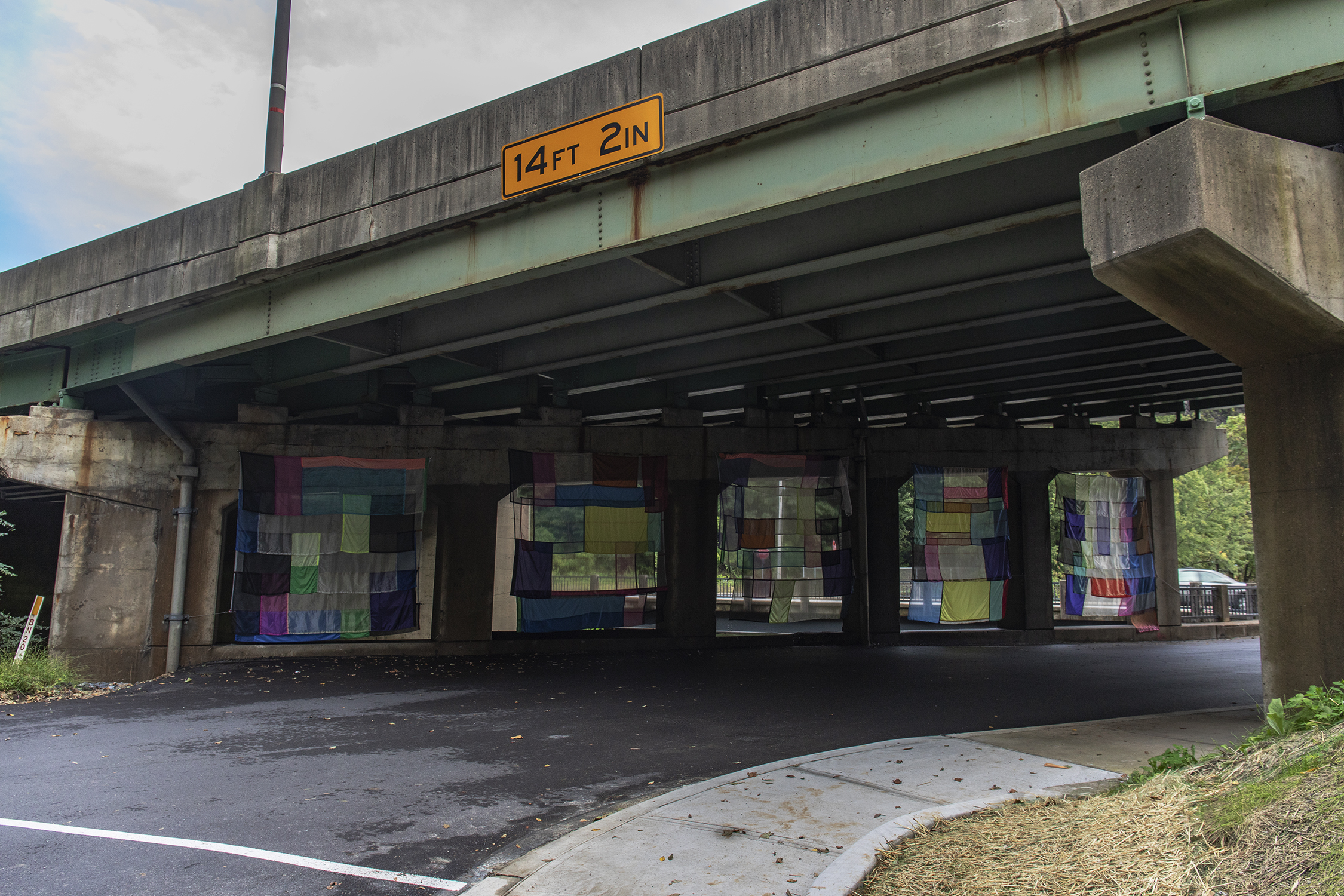 Artist Rachel Hayes installation on the arts trail (pictured) will stay up through the winter. (Photo by Elle Cox’21)

In order to raise public awareness around the Karl Stirner Arts Trail, a committee, which works to bring artists’ creations to the trail, recently collaborated with artist Rachel Hayes to make fabric installations made out of cargo knitting and silk. The installations’ pieces run from the corner of Sullivan Rd. and Bushkill Drive to 13th St.

The installation is meant to stay up throughout the winter and give a different atmosphere to the trail when it is “rather gray throughout the winter months,” said Director of Community-Based Learning and board member of the Karl Stirner Arts Trail committee Jim Toia. Hayes’ fabric installation project is called “Site Lines” and it consists of larger pieces of simple, colorful flags that are meant to float “when there’s any kind of air current happening,” Toia said.

There are approximately 16 different fabric installations along the trail, according to Toia. The committee is planning on adding one more installation on the small island on Bushkill, however, “the water’s been so high that we haven’t been able to get over to the island to do it yet. But as soon as we can, we’ll get it up,” said Toia.

“We wanted to time it so that the pieces went up and then stayed up through the winter so that they added color to the trail when all the leaves are down….those were our primary thoughts,” Toia said.

From Tusla, Okla., Hayes’ field of work consists of “quilt making, architectural space, light and shadow,” according to her website. Her works have also been exhibited in Columbus, Ga., Arlington, Va., New York, Kansas City, Mo., and many others.

Hayes has won many awards and fellowships like the Joan Mitchell Award for Painters and Sculptors (2016) and Augustus Saint-Gaudens Memorial Fellowship in Sculpture (2009), according to her website.

In the last of week of August 2017, Hayes visited Easton to start the project. It was about an 18-month process leading up to the pieces being installed, according to Toia. However, this is the typical time span for the installation of a “large-scale” project, Toia added.

After the exhibition comes to an end, the plan is to bring the project full circle by tearing and ripping apart the pieces of fabric to make draw-string backpacks for the homeless, according to Toia.