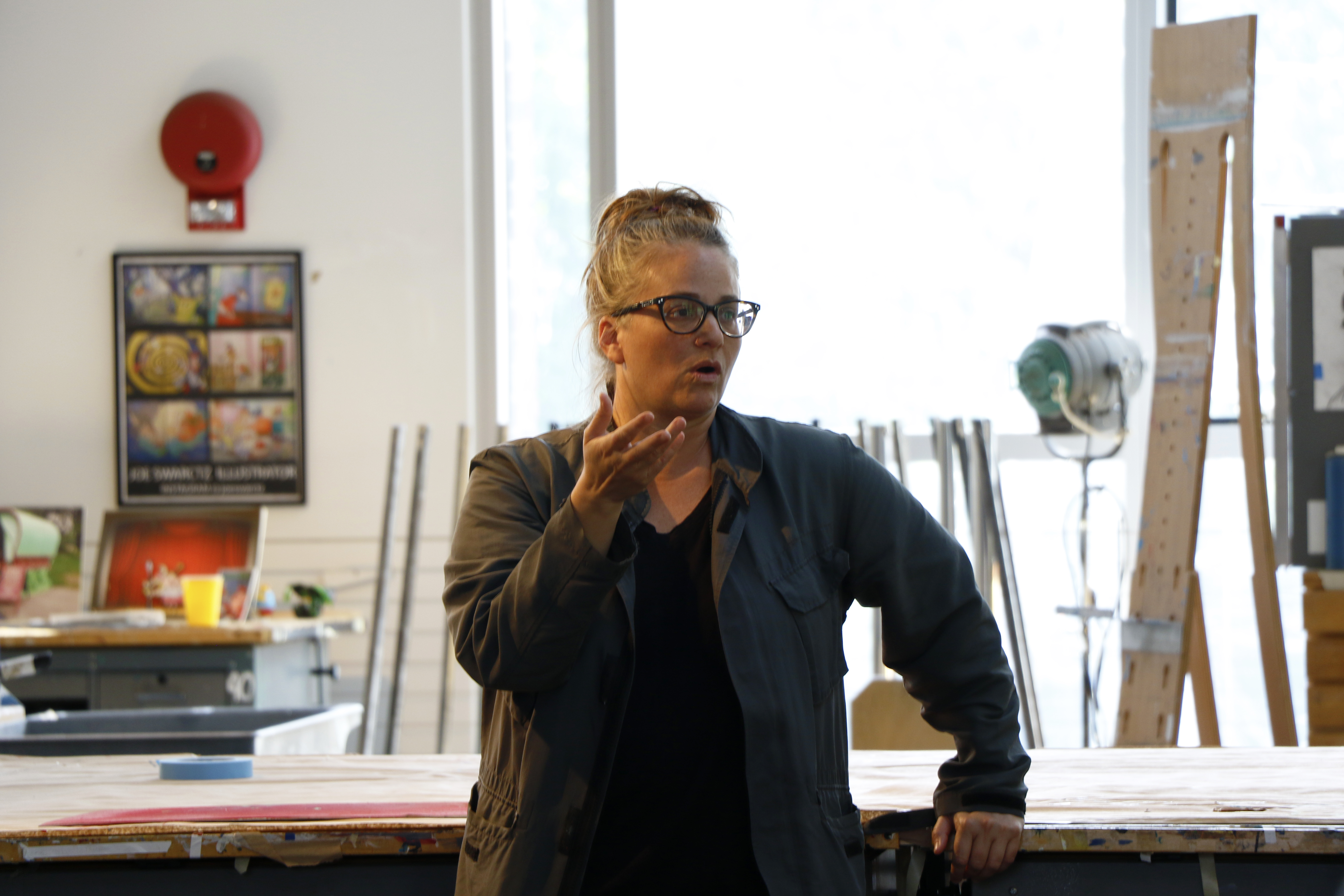 Artist Kate Gilmore said that she fell in love with art as a means to communicate her thoughts and feelings.

Gilmore visited Grossman Gallery, where her current art exhibition, “Kate Gilmore: In Your Way.”  Her exhibit is a collection of nine performance-based videos (2004-2014).

Gilmore started to experiment with art in college, where she worked with ceramics, plaster, wood and “just kind of fell in love with making.”

Her video pieces are known for featuring stereotypically clad women breaking stereotypes by performing labor intensive and sometimes even violent acts, like tearing apart a clay mound or busting through a wall. “Breaking is making,” Gilmore said.

Each video is also a combination of sculpture, film, performance, and often an installation practice. Gilmore said that she came to develop her multimodal style because she felt as though personality, humor and “some sort of intellectual pursuit.”

“So combining a performative practice and a video practice and an installation practice with these kinds of traditional materials just allowed me to have more of an expansive conversation about materials, and making art, and also larger conversations about the world and political systems.”

One of these larger conversations is demonstrated by her piece “Standing Here (2010).” The video depicts Gilmore donning a red dress with white polka dots, entering a small space of four white walls which she quickly begins to disassemble by kicking and punching through the plaster. “That piece was shot at the Whitney Museum,” Gilmore said. “I was really thinking about an institutional space, and a space that historically maybe let certain people in but didn’t let certain other people in.”

Through the dismantling of the space depicted in the piece, Gilmore was working to build a space of inclusivity.

“I was thinking about entering this space, creating my own environment…So transforming this space, this pristine white perfect place, into a place that is filled with history and there is a story of moving from one place to another and including other people into it,” Gilmore said.

Being inclusive to others is one of Gilmore’s goals with her art.

“People have different access…  it’s like a human experience. I want people to have access to [my art], to be able to look at it, to be able to engage with it, and whatever they take away from it that’s cool. I can’t control everybody’s impressions,” Gilmore said.

View all posts by Hannah Koch →