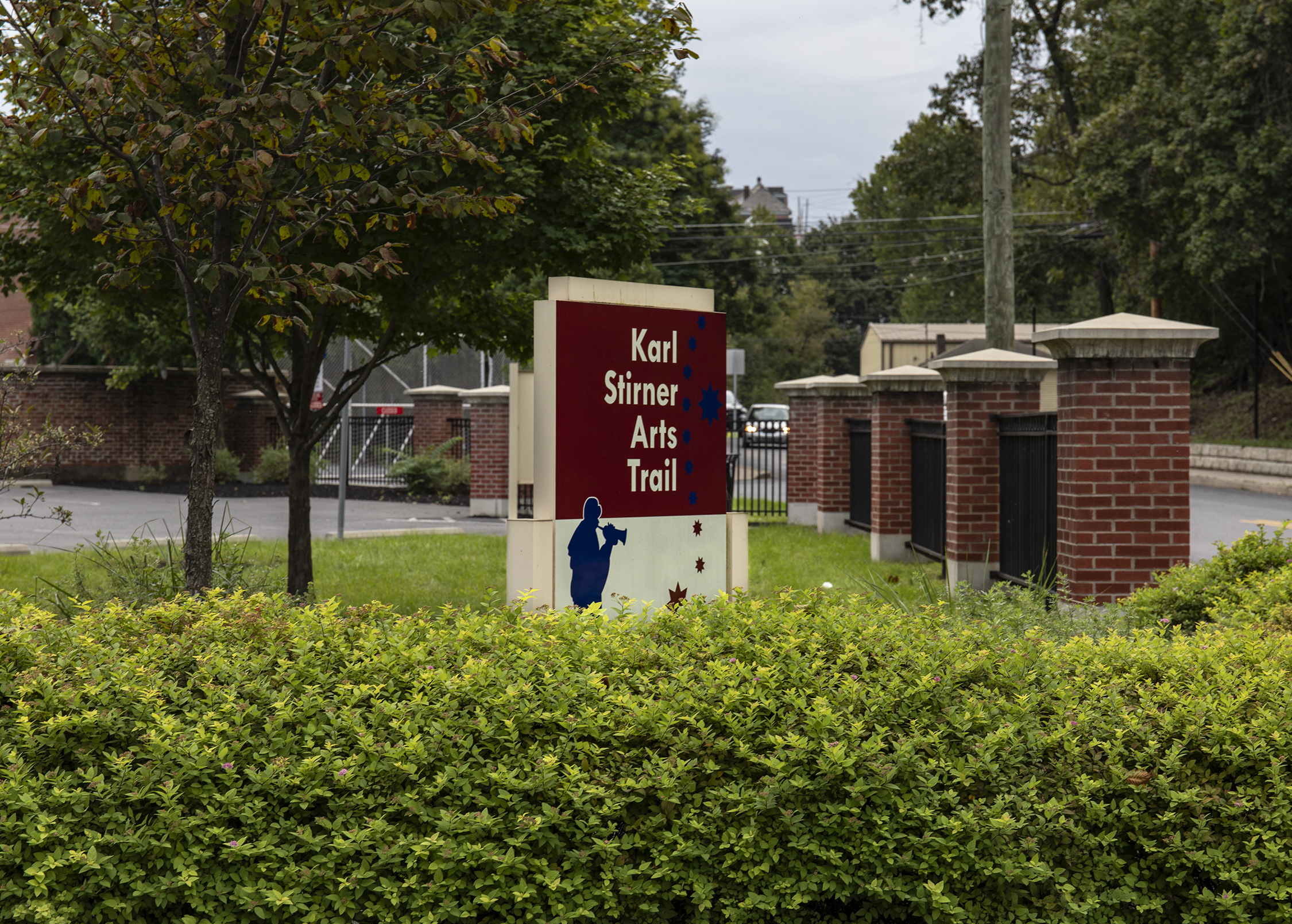 Racist and anti-semitic graffiti was reported along the Karl Stirner Arts Trail. Photo by Elle Cox ’21

The Karl Stirner Arts Trail, known for its eclectic displays of community art work, was defamed with explicit graffiti last week, causing some students question their safety in the surrounding community.

Alexandra Bord ‘19 discovered the graffiti on the trail around 10:30 a.m. on Thursday, Sept. 20. She saw a swastika on the path near the cemetery entrance, the word “bitch” painted, and the words “fuck ni****s.”

Bord informed a Public Safety Officer about the vandalism on her way up the hill, but was told that Public Safety could not help. Director of Public Safety Jeff Troxell said later in an interview that while Public Safety was informed, the Karl Stirner Arts Trail is out of the college’s jurisdiction according to Clery geography law.

After Bord reached out to public safety, a mutual friend connected Bord to Sydney Edelson ‘19, Vice President of Social Action for Hillel, the foundation for Jewish Campus Life. Bord and Edelson decided to seek advice from College Chaplain Alex Hendrickson, who advised that they call Easton Police, which Edelson did.

When Edelson explained to an officer that the graffiti was on the Arts Trail, “They weren’t sure where to go from there,” Edelson said. Bord, as the eyewitness, then spoke to the police for further details.

“They had no idea what I was talking about, what the trail was, or how to get to the cemetery part of it…The guy said someone was down there and couldn’t find it. They basically didn’t seem to know anything about the trail,” Bord said.

Anna Nollan ‘20 said she often runs on the arts trail and has seen similar graffiti there. Nollan was made very uncomfortable by the sight of the n-word, but she was unsure of her “authority” to report the incident as she isn’t an Easton resident.

Nollan added that as a woman, she already feels uncomfortable running on the trail, and that vandalism such as this can make that feeling worse.

“For someone to see that when they’re running alone in a vulnerable place…you don’t know if [the vandal] is still there,” Nollan said.

Later on Thursday, Edelson called to see if anything had been done about her report. A new shift of officers had arrived who, Edelson said, knew nothing of the earlier activity. She called Public Safety to check if they had done anything about the report they received, and the officer who answered the phone replied that Public Safety had no jurisdiction to anything under the Easton Police Department.

Bord revisited the trail to see what had been done about the graffiti, and took photos showing that officers had painted over the offensive graffiti, but some color was left behind. Nollan also reported that while graffiti including expletives, slurs, or inappropriate drawings were covered, other spray painted additions were left alone.

The police report, filed by responding Easton Police Department officer Philip McGuigan, stated that “various pictures [were] drawn on the pavement section of the trail,” but that no further actions would be taken once the graffiti was covered, which occurred by Thursday afternoon.

Troxell said that Public Safety communicated with the Easton Police Department about the incident.

“They have what they call a graffiti removal team that they use. My understanding is that… they temporarily go out and they’ll cover it and then they’ll come back and take it off,” Troxell said.

Art professor Jim Toia, an advisor for the Technology Clinic team that worked closely with the arts trail, wrote in an email he does not wish to draw attention to the graffiti as it was removed in less than 12 hours, and more important and positive things happen on the arts trail.

“Friends of the trail and citizens of the city are great watchdogs in keeping an eye out for any negativity that arises and we and the city work quickly to dampen those efforts,” Toia added.

Troxell said that this crime is not considered a hate crime or a threat to anyone in the Lafayette community.

However, the incident did cause discomfort in students like Bord and Edelson, and both said they feel it should not be ignored.

“[Students] should know to be aware of their surroundings,” Bord said.

“I would be naive if I were surprised. But it still hurts my heart that people not only harbor such hateful beliefs but feel the need to express them,” Edelson said.

Hendrickson affirmed that “Lafayette unequivocally condemns this kind of behavior.”  She added that the trail “was named in honor of someone who was a very uplifting and open-minded person in the community and [this action was] not in the spirit of the space for art and knowledge.”