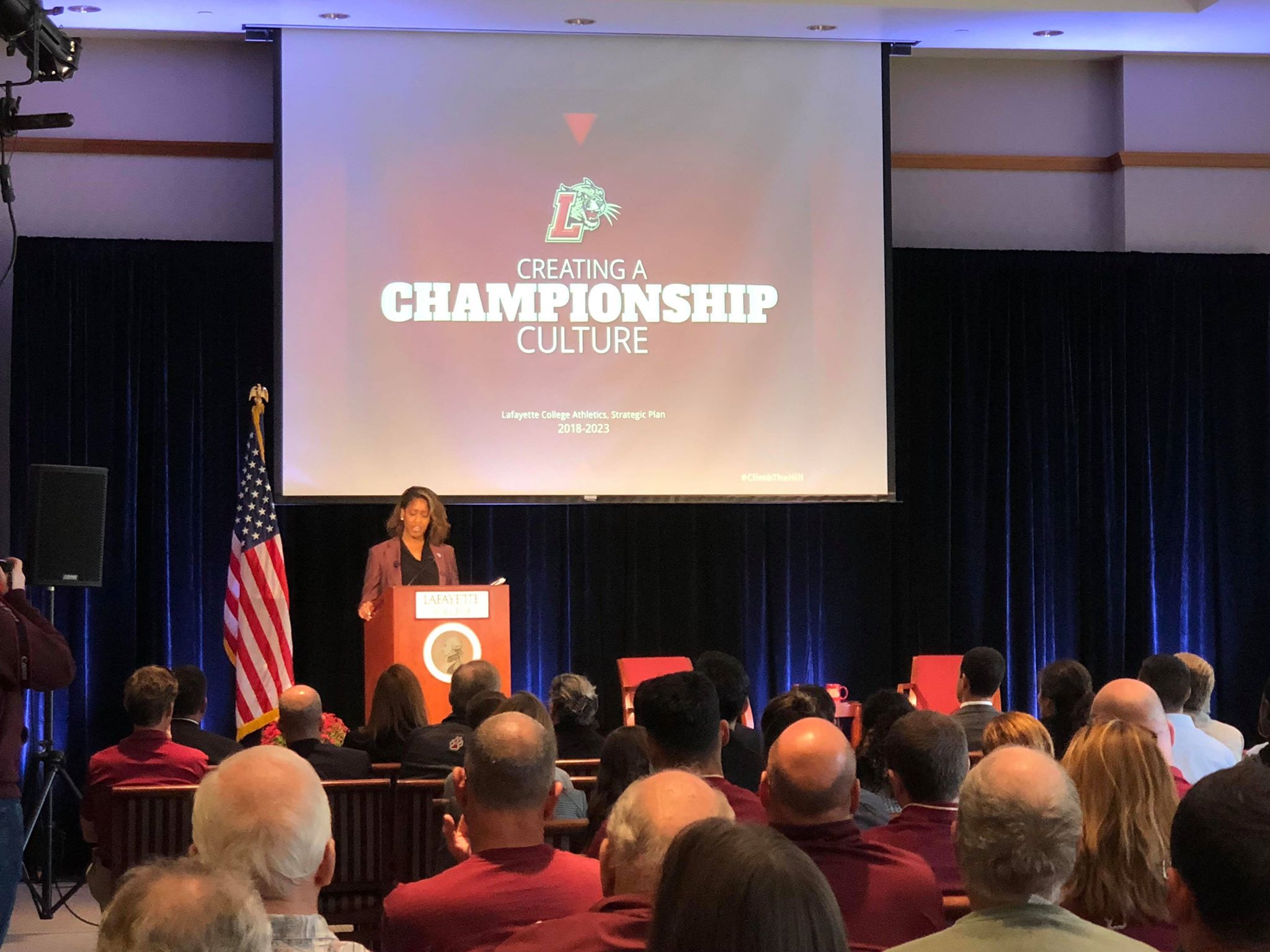 “Lafayette College, through teamwork across all campus constituents, departments, and support services is committed to achieving excellence in its NCAA Division I athletics program. Success is measured by the ability to create and maintain a winning culture that affords its teams with the opportunity to regularly compete for championships. Success also is achieved through excellence in academic performance, leadership development, and community engagement,” wrote the athletic steering committee, on June 16, 2017.

“When you’re talking about what we could do or what we could be, you want to put those things into action,” Freeman said in an interview. “Let’s start doing the things that are going to help us achieve this vision for athletics.”

The review concluded that the “athletics program is not funded and supported at a realistic competitive level,” athletics needs to “change the culture of skepticism,” and that the “student-athlete experience is considered by the student-athlete as not meeting their expectations for a Division I level and [is] not comparable to other Patriot League members,” says a presentation prepared by the senior staff of athletics.

The college has said that the review itself will not be released due to confidential data from other institutions contained in the report.

According to the presentation, the review recommended gender proportionality and student-athlete support programs, as well as other ideas to increase competitiveness and quality of student-athlete experience.

The six-point plan reflects Freeman’s five first points she highlighted in the press conference where she was first introduced in the position. The new sixth point focuses on funding. The goals now include competitive excellence, academic excellence, student-athlete experience, community, integrity and funding.

“We added the last piece, which was number six, which is, ‘Okay all those things are wonderful and there are certainly strides we can make without spending another dime, but in order to make significant impact, we will need to increase the resources that are dedicated to athletics,’” Freeman said.

Freeman said that the college “has not done well in the past” with spending money efficiently during the presentation on Thursday revealing the plan to the campus community.

Frequent coaching turnover was “identified as a deficiency” in the review, according to Freeman, and is a point of improvement in the plan. Coaches cannot develop student-athletes to their best ability if their stay at Lafayette is short, she said.

“We need to increase staffing in some of our sports, but we also need to improve upon the salaries for some of our positions,” Freeman said. “One of the things that has been challenging over the years is our retention rates for our assistant coaches, and some of that is due to the compensation that we are able to offer for those assistant coaches.”

Funding will also go towards increasing scholarships, financial aid, and women’s sports, according to the presentation.

Freeman highlighted three places the team will try to increase revenue: the college’s operating budget, existing programs, and corporate sponsorship. She mentioned that the department doesn’t “have a proactive approach to season ticket sales for revenue-generating sports,” adding that they “need to do more there.”

One strategy listed in the plan is to “review and update policies to reflect accountability and behavioral expectations.” Freeman has already changed a policy regarding student-athletes and alcohol, where cases will be reviewed individually by Freeman and the senior staff of the athletic department.

“I think where we’ve landed still achieves those goals in terms of setting expectations for behavior, but also holding student athletes accountable, but [also] being able to look at cases individually and make determinations as to what is the best course of action instead of having a more prescriptive ‘first offense equals this, second offense equals that’ without having any consideration as to what the offenses were,” Freeman said.

Freeman says the process of assembling the strategic plan started when she first arrived at Lafayette, and has been recently completed to the point that she and the department decided they were ready to share what they put together. She has shown the plan to several groups, not including any student-athletes, to receive feedback before releasing it.

President Alison Byerly and Vice President of Campus Life Annette Diorio, who introduced Freeman when announcing her hiring, also introduced her presentation of the five-year plan.

“The leadership of the college is aware of the needs that we have in athletics and they support the direction of the plan and are committed to working with me to achieve the goals of the plan,” Freeman said.

Freeman said that the “five year” goal set in the plan is a general timeline, as some of the goals will take longer than others. She says that strategic plans in athletics are typically five years, as the department will “take five years,” and then “back up a little bit.”

“We’re going to approach every single goal with energy, with enthusiasm, and attack it right away,” Freeman said. “So there isn’t this sense of ‘Okay we’re going to focus on goal one or two first, and the we’re going to wait on the others,’ it’s not like that. It’s what can we do now, what can we do right away to start to improve in these areas, and we’ll keep plugging away at it until the end.”

The movement’s hashtag, #ClimbTheHill reflects a connection between the name of College Hill and “wanting to ascend to greatness,” Freeman says.

When can the College Community see the two-year athletics review by the Inter-Collegiate Athletic Counseling (ICAC)?