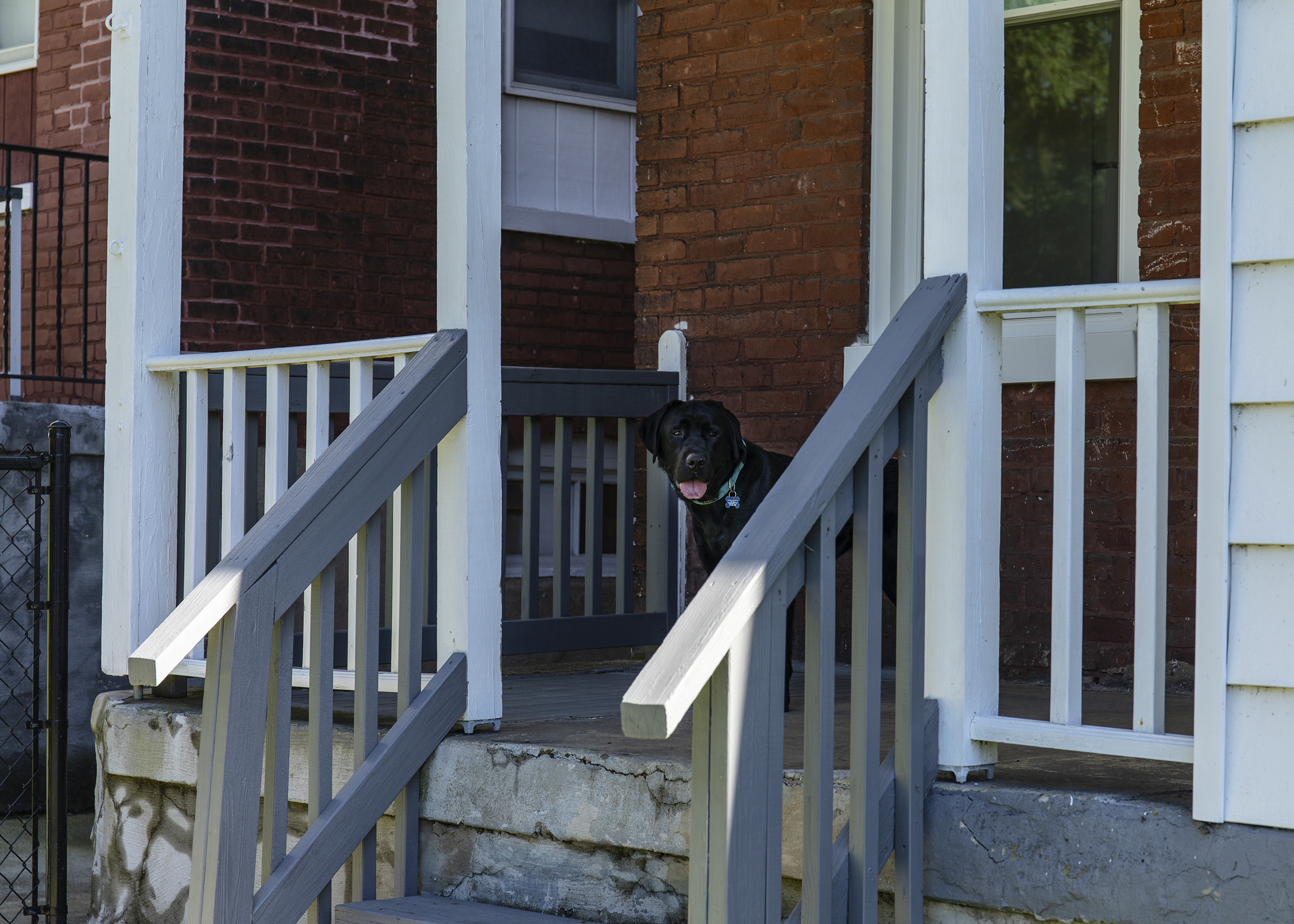 Sapphire, one of the three dogs living in the Dog House this year, is training to become a companion dog. (Photo by Elle Cox ’21)

Sapphire, Abel and Owen will be keeping the residents of the Dog House busy, with each having a unique training curriculum or level to accomplish throughout the school year.

Sapphire and Abel, who arrived last week, are both labrador retrievers. Abel is a service dog in training, while Sapphire is a companion dog, meaning she does not require the same socialization and integration within a community as Abel.

Owen, an 8-week-old half golden retriever, half yellow lab puppy, arrived this past Tuesday as a late addition to the Monroe Street residence. Owen will be receiving basic training throughout the semester until he is old enough to be set on a specific training tract.

The Dog House partners with Canine Partners for Life, a non-profit in Cochranville, Penn., that trains puppies for service work through a variety of programs in the area, including the Dog House.

Canine Partners for Life provides dogs for students to train over the course of a school year. Right now, there are six students living in the Dog House, and five others around campus, who are responsible for raising and training the three dogs in the house, Dog House resident Quinn Plante ’21 said.

Abel, described by the residents as a seven-month-old, hyper-social yellow lab, was in a puppy raising program in prison with all male inmates before Lafayette. “It’s a really good way for puppies to get basic socialization training and it’s really beneficial for the inmates as well,” McManus said.

Shifting from a prison to campus environment, however, adds a new level of socialization Abel had to adapt to.

“He’s getting along really well with everybody now. He is very sociable,” McManus added.

While Abel is still in training to become a service dog, Sapphire has already learned the majority of her commands but because she is small for her breed, she will be placed as a home companion dog.

“There [are] alert service dogs and then there are mobility [dogs] for those who can’t walk, and then the home companion dogs are just for companionship,” Plante said. Companion dogs do not attend classes but still receive similar training.

Every day, the students will each have a certain amount of time allotted to take care of Abel, Sapphire and Owen. The dogs’  progress throughout the year is recorded in a book, including commands learned and skills developed. The majority of what the dogs learn while living at Lafayette are just basic skills and commands they need to know before placement.

“We as trainers have our own set of what we have to train them for, but once they leave us and go to back to the kennel they have further training, which then will decide where they go service-wise,” Plante said.

Last year, funding for the Dog House fell short, and a GoFundMe was started to raise money for unforeseen vet bills when a dog ate a piece of gum, and the students in the house had to cover it out of pocket, McManus said. This raised questions of what the budget will look like for this school year, but McManus said she is not worried about costs.

“As long as we keep ourselves organized, I don’t foresee it being a major issue,” she said.

Their current budget covers food and supplies for dogs, as well as some money to cover vet bills, but if there is an emergency, the costs may fall on the residents.

The Dog House is still planning to fundraise this school year, however. There is an open house coming up, as well as plans to dress up the dogs in Halloween costumes to raise money, McManus said. They are also hoping to hold a puppy kissing booth with Owen, where students can play with him for a few minutes.

Despite the possibility of unexpected vet bills and amount of responsibility, the residents said they love living in the Dog House.

“Coming home from anything and being able to hang out with a dog for a little bit is the best way to destress,” McManus said. “It’s a big responsibility but I love dogs, so I don’t mind it.”