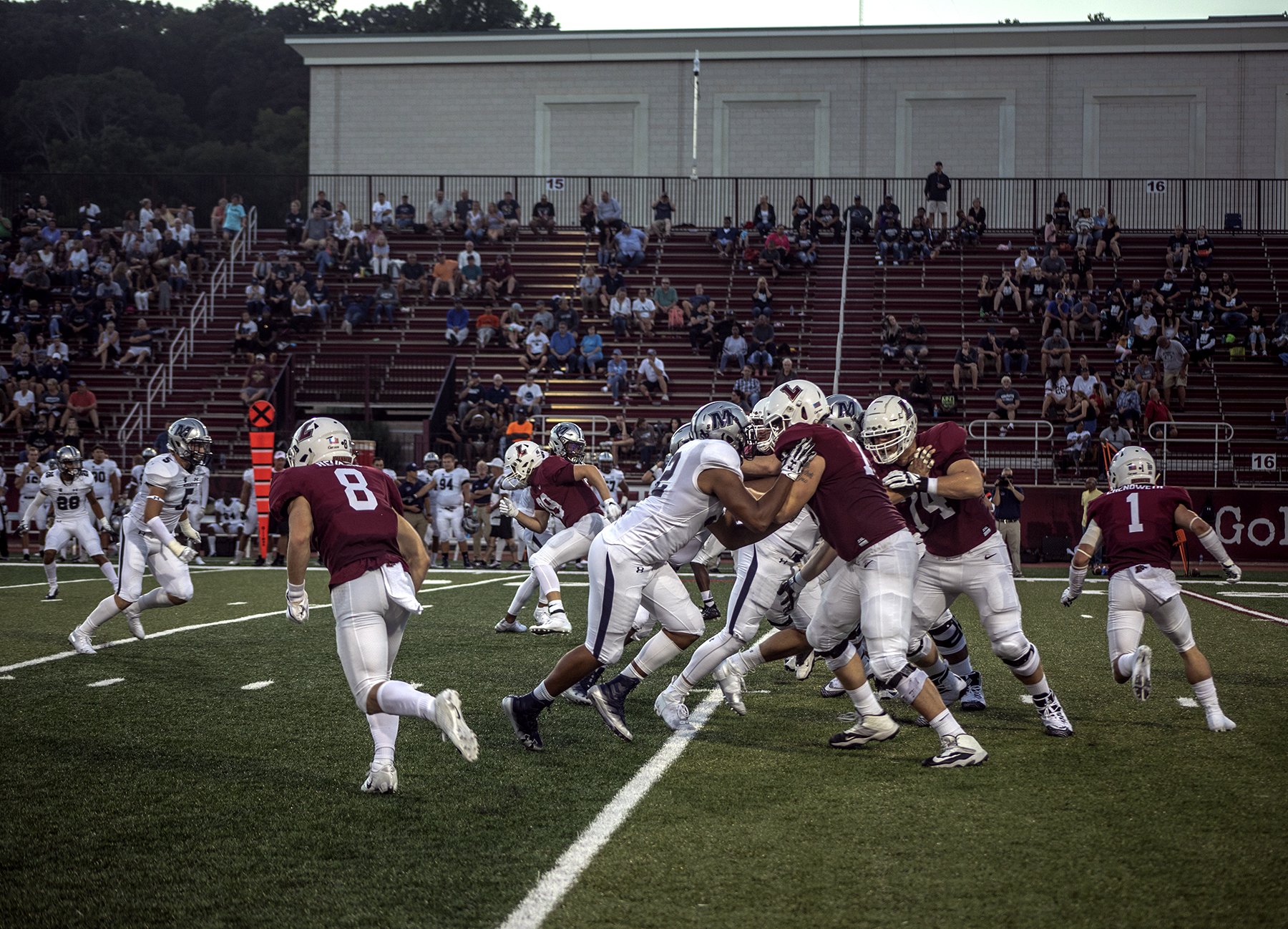 The Leopards offense scored all 20 of its points in the first half. (Photo by Elle Cox ’21)

The Leopards’ football team dropped a close game to Monmouth on last Saturday, losing 24-20 in their home opener at Fisher Stadium. Despite a first-half offensive surge, Lafayette missed several key opportunities late in the game and now sits at 0-3 on the season. It was a tale of two halves for the Leopards, who scored 20 points in the first half but were held scoreless in the second as the offense stalled.

The game was close until the very end, as both teams had scoring opportunities down the stretch before Monmouth’s defense tightened up and forced a sack and three straight incompletions to end the contest.

Sophomore quarterback Sean O’Malley had a breakout game, passing 20-37 for 221 yards and a touchdown. He looked comfortable on the field with his ability to read the defense and react quickly out of the pocket, going 6-7 passing in the first quarter.

“Our reads and progressions and play-calling were clearer, we had prepared throughout the week very well,” O’Malley said. “Our ability to generate positive plays was the biggest improvement I saw.”

Junior wide receiver Nick Pearson was on the receiving end for nearly half of O’Malley’s passing yards, finishing with 106 yards on five catches, and also scoring a rushing touchdown at the end of the second quarter to put Lafayette up 20-9 heading into halftime.

The offensive fireworks started early as Monmouth marched down the field for 78 yards and a touchdown on their opening drive to put them up 6-0. It didn’t take long for the Leopards to respond, as sophomore running back J.J. Younger returned the Hawks’ first kickoff 95 yards for his first career touchdown. With the crowd energized, the Leopards scored 13 points in the first quarter alone after managing just six points in their first two games combined. Sophomore wide receiver Quinn Revere capped off the first quarter scoring with a short pass from O’Malley to extend the lead. The touchdown marked the first of Revere’s collegiate career.

Head coach John Garrett credited his team for their ability to respond despite falling behind early.

“You have to flip the switch and not let the previous play affect your confidence or concentration,” he said. “Our guys respond the right way.”

In addition to the strong offensive effort, the Leopard defense came alive when it mattered. They forced a punt with less than a minute to play which gave the offense one last shot at taking the lead and stopped Monmouth on three straight plays inside the 10-yard line to force a field goal in the second quarter. Despite the Hawks’ 528 yards of total offense, they managed only 24 points. For comparison, Lafayette scored 20 points on 269 total yards. Freshman defensive lineman Malik Hamm continued his strong start, finishing with 7 stops and 2 tackles for loss, while linebackers sophomore Major Jordan and senior Michael Root combined for 17 tackles.

The Leopards will travel to Hamilton, NY, tomorrow to take on the Raiders of Colgate University in the first Patriot League matchup of the year for Lafayette. Colgate’s league record is 1-0 after their week one win over conference opponent Holy Cross.

“Everyone knows what’s at stake, the magnitude of each game is higher than in other leagues,” Garrett said. “If you lose one, you have to run the table. If you lose two games, you’re out. I expect it to be a real competitive game, and a great challenge for us.”