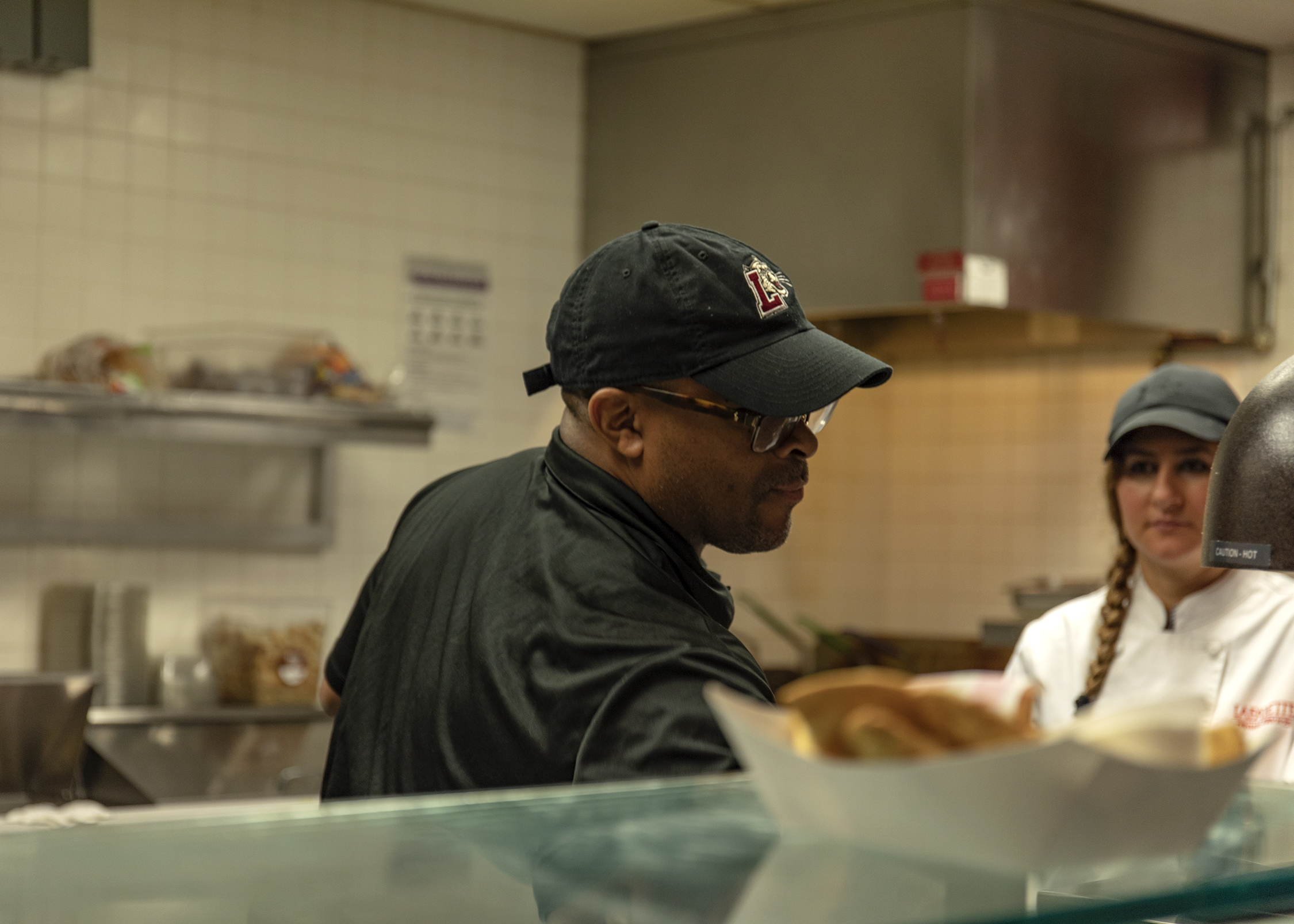 Larry Williams’ favorite part of working in Lower is mingling and making connections with students. (Photo by Elle Cox ’21)

When students hear numbers echoing through the Farinon Atrium during late night Lower hours, they think of Larry. Larry Williams may be best known at Lafayette for yelling order numbers in Lower to remind students that their meals are ready, but the connections he’s made with students are what stands out to him.

Williams acknowledged that his yelling has become so iconic that “students look forward to hearing me yell.”

It has been eight years since Williams arrived at Lafayette for a job with Dining Services. Williams was born in Brooklyn, NY, and he moved to Pennsylvania eight years ago for a change.

“I was living closer [to Lafayette], at the time I just bought a house and I was looking for jobs. Lafayette gave me a shot, [I have] been here for eight years,” according to Williams, “I was in Gilbert’s [Cafe] for the first four years… then Lower.”

Outside of being a member of dining services at Lafayette, Williams also has a day job where he works with the mentally challenged people.

When asked what the best part about working here is, Williams answered, “Mingle, have fun, laugh… I know so many students, man, from the past, you know, we [are] seeing students when they come in, and when they leave… It’s a bittersweet situation. [After graduation,] I don’t see you no more, unless you know, you come back as…alumni.”

While working in dining services, Williams has made connections with students.

“A lot of students open up to me, you know, it’s just fun… it’s like giving back, I’m giving back. Cause I didn’t go to college, and I see students want to do better, man.”

He has also seen how many students have grown in maturity, and has witnessed “whole attitude change[s]” knowing students throughout their college careers, as they become more academically-oriented instead of socially.

Williams also added, “I know a lot of kids, a lot of students. I met a lot of them from New York. It’s just fun. See the students, do their things, have their fun, cramming at 1-2 o’clock in the morning.”

Uche Anomnachi ’19 shared his personal encounters with Williams in an in-person interview.

“I didn’t interact much with Larry before, until I learned how to juggle…and sometimes I would pick up three oranges and start juggling… Larry always yelled at me and called me a ‘juggle boy,’ and we have developed this casual relationship ever since then.”

Anomnachi added that Williams “is a very cool guy, we made meaningful connections, [and he’s] very intense.”

Speaking of the future, Williams repeatedly said, “You gotta love what you do, and I love what I do.” Williams mentioned that “the kids always tell me, ‘We know you gonna yell that number,’ and somebody told me, ‘You should get a board for numbers—I said, ‘they ain’t gonna pay attention to the board, right, they all [sit] in the back, they might even be in here [Lower dining area], some kids be right in the kitchen and I’m yelling and they don’t know I’m yelling or nothing, cause they [are] talking.”

When told about students being scared of Williams, he said, “For the most part, you give me respect, I will respect you… all you have to do is ask, if you ask… if I can do it, I will do it for you.”

“[I] look forward for the summer to be over, to when I come back and see the smiles, meet the new students.”

Outside of Lafayette, Williams loves sports. “Basketball, football team here… I’m from New York, so the Giants, the Knicks, the Yankees, the Brooklyn Nets. I’m all New York, man.”

In the end, Williams just wants to tell the students, “continue to strive, man. Do what you came here for, you got a good start, once you got into the real world, it’s about paying bills…have fun man, but remember, [the real world] is right around the corner man. I got mad love for y’all.”