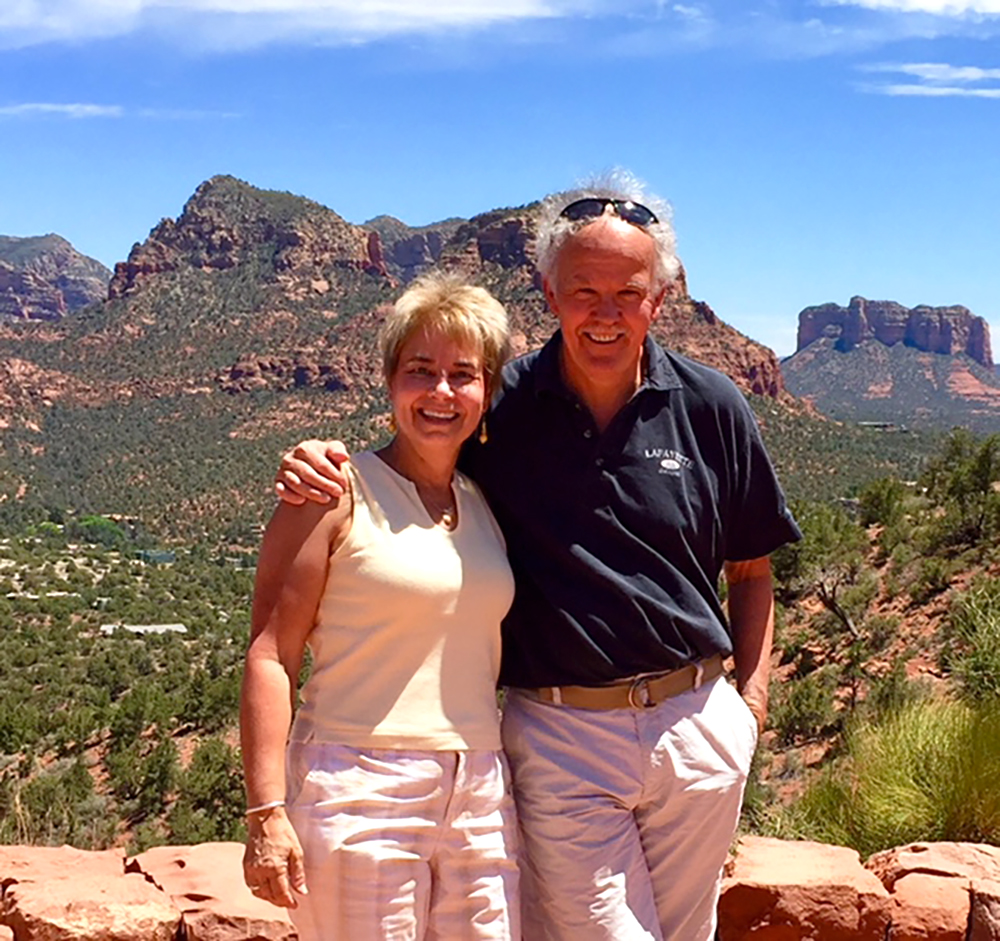 Donna and Jim Krivoski retired after 28 and 33 years at Lafayette respectively. Photo Courtesy of Jim Krivoski

From raising their two daughters in Watson Hall, to creating the pep band, running family weekend and working with residence life, Donna and Jim Krivoski truly became a part of the Lafayette and College Hill community during their time at the college.

Donna and Jim retired from Lafayette after 28 and 33 years respectively. They arrived in 1985 when Jim assumed the role of Director of Residence life.

“I spent most of my career here in Student Life and Residence Life and as a Dean of Students, and then eventually Vice President of Student Life. And then seven or eight years ago I moved to the President’s Office and worked primarily with the Board of Trustees…My plan was three or four years and 33 years later, [I’m still here],” Jim said.

When the Krivoskis arrived in 1985, they lived in the faculty apartment in Watson Hall for 6 or 7 years where they raised their two daughters, one of whom still lives in Easton.

“When we arrived, one was one year old and the other was five years old. So you would see little tricycles and baby pools out there and the students just loved coming down to visit with the girls,” Donna said.

Donna started working in 1990 with both parents and development. However, as the position in Parent Relations evolved, Donna devoted all her time to working with parents.

“When I worked with parents it was a lot of information sharing, a lot of advising, teaching parents the correct parental role now that they’re the parent of a college student as opposed to a high school student,” Donna said.

After working with both parents and students for around three decades, Donna and Jim have seen several changes in involvement and community relationships.

“From the parents side, parents are more involved now…There was a Parents’ Day and it evolved into Family Weekend, it became more inclusive. There’s [also] a student committee that works on Family Weekend and that’s one of the best parts of the job—working with the students,” Donna said.

Jim said he feels much has changed in terms of the overall student life experience.

“I think about all the things now that are available to students that weren’t 30 years ago. A really sophisticated, well-managed Residence Life program, Student Government, student leadership opportunities, The Lafayette, all sorts of these highly sophisticated health, wellness, recreation programs,” Jim said.

Towards the end of their time working at the college, Donna and Jim resided in the College Hill Community on Burke Street across from the Kirby Sports Center.

“We used to live very near campus and what was good for us is that we had a lot of students that were able to come to the house. We had cookouts, we had birthday parties, sometimes with athletic teams, ISA, ABC. [Jim] did a lot of cooking at the grill,” Donna said.

She added they were always amazed at how much the football team could eat, and said they learned that “if you cook it, they’ll eat it.”

Donna and Jim later moved to Forks Township, but that didn’t stop them from inviting students over for cookouts or picnics.

“One time we had a picnic for the pep band, because we started the pep band, but I didn’t realize they were bringing their instruments, so all these students were playing in the yard, so the neighbors just kind of joined in,” Donna said.

The creation of the pep band, which was in part to have Lafayette’s own band perform at Family Weekend, was one of the legacies Donna and Jim leave behind at Lafayette, and it was when they announced their retirement and received notes from past students and faculty that Donna said she realized how many people they had touched in their time here.

“I was thinking…‘What am I most proud of?’ and it’s the students. Over the years with relationships with so many [resident advisors] and student government people and outreach folks and I see them now. They’re adults, they’re very successful professionally, they’re parents,” Jim said.

“It’s always strange when those students bring their kids back to look at the college, or the kids are here. That’s when I really feel old. But that’s what I’m most proud of—students,” he added.

While retired, Donna and Jim don’t plan on leaving the campus community anytime soon. Jim is currently sitting in on a history class on Wednesday nights with history professor Bob Weiner, and Donna is already planning on coming back for Family Weekend. However, despite their continued involvement, they are excited to have time to themselves to travel, visit family and just relax.

“We’re just sort of taking a breath. And I don’t want to make any decisions or plan anything right now, but let’s give it a semester and then we’ll see,” Donna said.