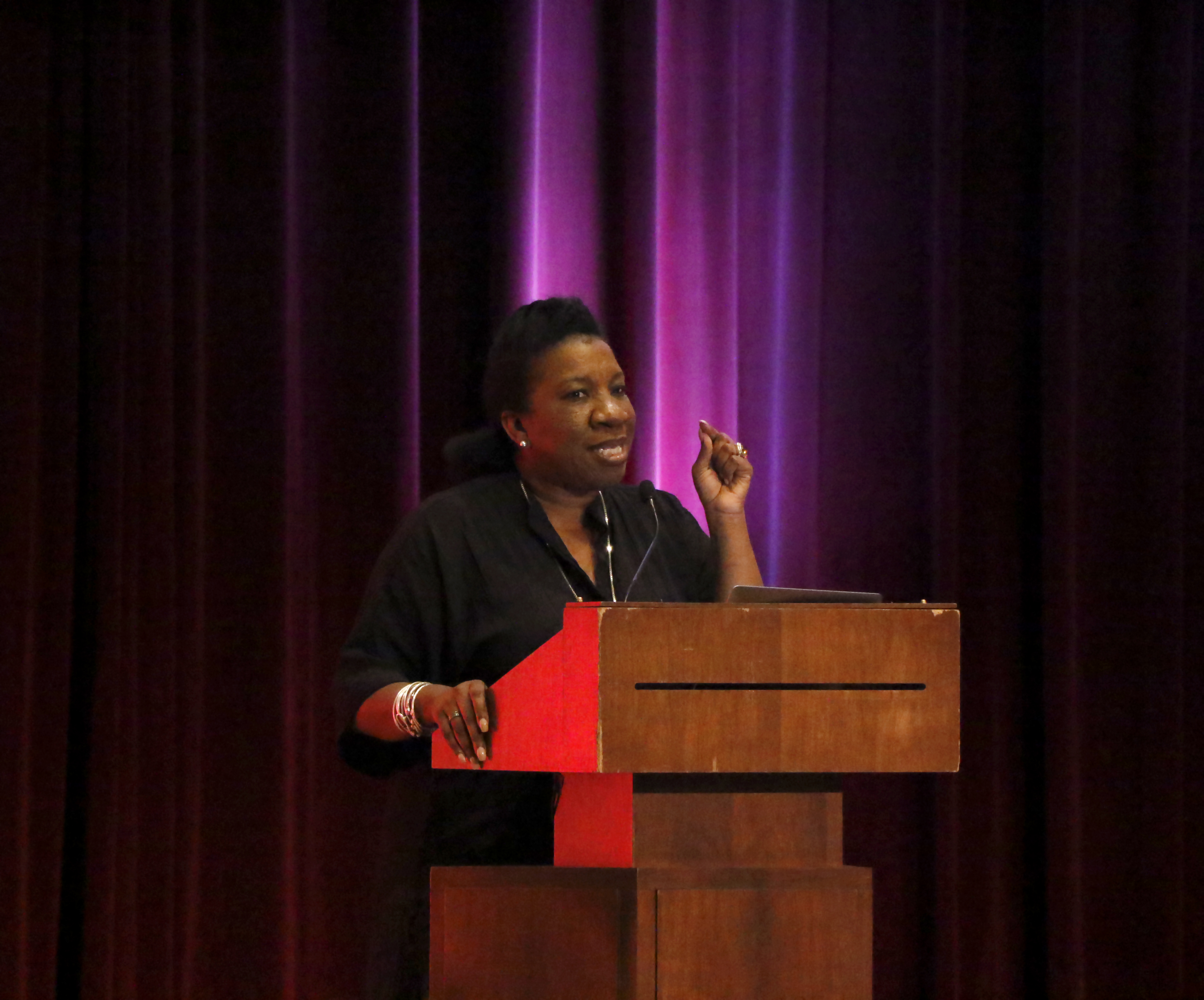 Tarana Burke, founder of the ‘me too’ movement, spoke of the need to utilize this moment in history to create meaningful, intersectional change. Photo by Jess Furtado ’19

Tarana Burke knew at age 14 she wanted to be an activist, but it was years before she found the cause that would drive her social justice work for years to come.

Burke, founder of the ‘me too’ movement, spoke to a fully packed Colton Chapel audience about her journey with the ‘me too’ movement. The story of a young girl named Heaven, who experienced sexual violence at the hands of her mother’s boyfriend, was largely the catalyst for moving her to action, Burke said.

“I get asked often, ‘How’d you get the [‘me too’] movement started?’ I think often that [the look] in [Heaven’s] eyes is when the spark came. When she was talking, I was thinking, ‘I’m not a therapist nor a social worker and I don’t want to mess up.’ I was scared, and in my mind, I thought all these things but underneath all of this I wanted to say, ‘This happened to me, too.’ That feeling, the look in her eyes, I wanted to say ‘Me, too’,” Burke said.

She added she was particularly struck by this story and by her own reaction to it, which stuck with her through the years. Many other young women who confided their stories in her had a strong effect on her, as well.

“What I realized I had was experience. It was a experience I wish I didn’t have but I have it nonetheless. I needed someone as a grown woman to say to me ‘I see you.’ I needed healing. I needed people to care,” Burke said, regarding her own experiences as a survivor of sexual violence.

“A lot of people are talking about ‘me too’ in the wrong way now. What I’m saying is if we don’t call a thing a thing, then we don’t handle that thing. What we’re doing is trading on labors of survivors without supporting them,” Burke said. “This movement is about healing individuals and healing communities.” She spoke on how many have centered their focus on “sexual harassment in the workplace,” which she acknowledged as a pervasive issue, but also not the only one: this form of sexual misconduct is not a blanket statement for all forms.

“There should be an inherent commitment to making this community less vulnerable to sexual violence,” Burke added.

This commitment should be centered around the students’ needs and Burke said necessary solutions will only come about with active student involvement. However, Burke also addressed the Lafayette administration and their efforts to foster specific values within the college’s mission statement.

“Your mission statement says, ‘Lafayette wants to encourage students to develop systems of values that include an understanding of personal, social, and professional responsibility’…But I would question the administration, ‘How does your work to prevent sexual violence on this campus reflect that mission?'” Burke said.

The ‘me too’ movement was founded in 2006 to help survivors of sexual violence, particularly young women of color from lower socioeconomic class communities, find “pathways to healing,” according to the movement’s website. However, in October 2017, as a result of the #metoo hashtag and stories of many Hollywood actresses who are survivors of sexual violence, the movement went viral and received mass media attention. In particular, actress Alyssa Milano used this hashtag to address sexual violence against her by filmmaker Harvey Weinstein.

“Harvey Weinstein planted the seed. If you go back carefully in the articles [of the women who were sexually abused by him], never did women say we want to take Weinstein down,” Burke said. “They said they wanted to tell their truth and prevent another young woman to go through what they went through. It was never about the consequence of their actions.”

The movement is now active on a global scale. When the movement went viral, Burke said many people asked if she was shocked. Her response, however, was an unsurprised remark about how many people the movement had reached.

“One thing I wasn’t shocked with was the numbers. I never left a room with less than half of people in a room saying ‘me too,'” Burke said.

Burke started her career as an activist as a grassroots organizer at 14. Then in college, Burke said she started feeling driven to address the social issue of sexual violence.

“[It started with] a sexual assault case on campus. Nobody wanted to talk about it,” Burke said.

Today, Burke is working in a community where she has started a program for girls.

“We have experienced countless girls who were sharing their experience with sexual violence. It would usually be a story they would tell,” Burke said.

Throughout her work, Burke has noted the power of language in conversations about sexual violence, and the fact that people often take for granted that survivors know how to talk about things that happened to them. Language, she said, is also important for knowing how to address sexual violence and aid with the community healing process.

“She emphasized taking people from margins when no one else would. That’s very important. I think its important that this isn’t silencing, but that these people and groups matter and aren’t seen in the same light and if we don’t include them then no one else will,” Yusuf said.

Fayola Fair ’19 thought it was “amazing that her language was extremely accessible. A lot of times, academia tends to be very inaccessible. However, with the language she used, anyone could find their way into it…I loved that she said you don’t need all the answers to create change. If you see a problem you should address the problem.”

Burke emphasized the importance of being active in creating change, and urged the audience to recognize their power to affect change both at Lafayette and on a larger, even global scale.

“I need you to take ownership because alone I can stand up and I can scream into the wind about what we really are, but imagine if we were screaming together,” Burke said. “Imagine how our voices amplified together would really shift, because if we miss this moment I don’t know if we’ll get it back again. I don’t know and I don’t want to waste this moment.”