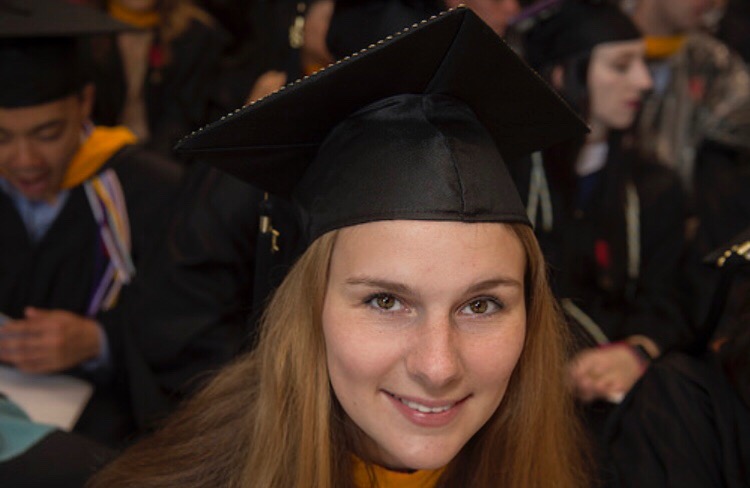 Tina Yerdon ’18 has begun research on the rare bone cancer she was diagnosed with during her junior year. Photo courtesy Tina Yerdon ’18

In her last two years attending Lafayette, Tina Yerdon ’18 fought a battle that she never expected she would have to fight: a rare form of bone cancer. However, from her diagnosis to a post-surgery infection, she did not let her disease get the best of her. Instead, she defeated the disease herself and then decided she would contribute to defeating it altogether.

Yerdon is now utilizing her biology major in order to research and analyze the epigenetics of the very cancer that altered the second half of her college career.

“I have taken a lot of fundamental biology classes…all of which have catered my interests towards cancer research,” Yerdon said in an e-mail. “I am fascinated with disease and the body’s ability to initiate, progress, or fight disease, so each one of the classes I took built my background for my current research.”

Prior to her diagnosis, Yerdon enjoyed being active. She skied every winter, ran a half marathon and was also the president of the Lafayette Club Soccer team. It was during one of her soccer games in her junior year, however, that she realized something was off.

“I was looking at the bruises I got from that game and noticed a bump on the inside of my leg, just under my knee but not on my knee,” Yerdon said.

The bump turned out to be an osteosarcoma tumor caused by parosteal osteosarcoma, a rare type of bone cancer.

“There are only about 900 diagnosed cases of this cancer a year,” Dr. Jeffery Goldstein, Director of Health Services and College Physician said.

Yerdon underwent surgery in June 2017 to both remove the tumor in her leg and insert a prosthesis, but her fight didn’t end there. Two months after the surgery, Yerdon was back at school and felt  pressure building up in her leg.

“Immediately I knew I had to make another trip to [the hospital]. That same day I saw one of my physicians assistants, and she told me I needed an emergency surgery as she thought I had an infection,” Yerdon said.

During surgery, Yerdon’s doctors realized that the upper portion of her calf had died due to a bacteria in the same family as the tuberculosis bacteria—a very rare, aggressive and difficult infection to fight.

“No one could tell me how the infection got there, but it had to have been introduced during the initial surgery because it was so deep in my leg,” said Yerdon.

“I have been doing hospital medicine for years and I have never come across her particular bacteria,” Goldstein said.

Yerdon spent her first semester of her senior year in and out of the hospital, had two washout surgeries and administered antibiotics to herself five times a day. In February 2018, she had the final surgery to replace the prosthesis. Despite all of this, Yerdon was still able to graduate on time.

Goldstein gives credit to Yerdon for her determination through it all.

“She has a remarkable amount of courage and strength, which is why she has been able to overcome all of these insurmountable obstacles,” said Dr. Goldstein.

With her surgeries past her, Yerdon has now been able to focus on her research, which she conducts with Lafayette professor Dr. Khadijah Mitchell.

“She took me on as an independent study student,” Yerdon said. “She has taught me so much about professional research methods that I can’t even put it into words.”

“We would like to analyze the DNA methylation and differential gene expression of patients in each category, for the possibility that if our findings are significant, we can better diagnose, treat, and provide better prognosis for patients in the child category and then patients in the AYA category,” Yerdon said.

Yerdon has relied on outside resources that Dr. Mitchell has introduced to her, as well as different technologies and softwares such as TARGET Data Matrix and PubMed.

“This is a very rare type of cancer and a very under-researched topic, making it innovative,” Yerdon added.

Yerdon wants to continue her career in the medical field and is currently applying to different physician assistant programs.

“I want to help show others that it is possible to get through something like I did, be on the other side of it, and live a very full life,” Yerdon said.