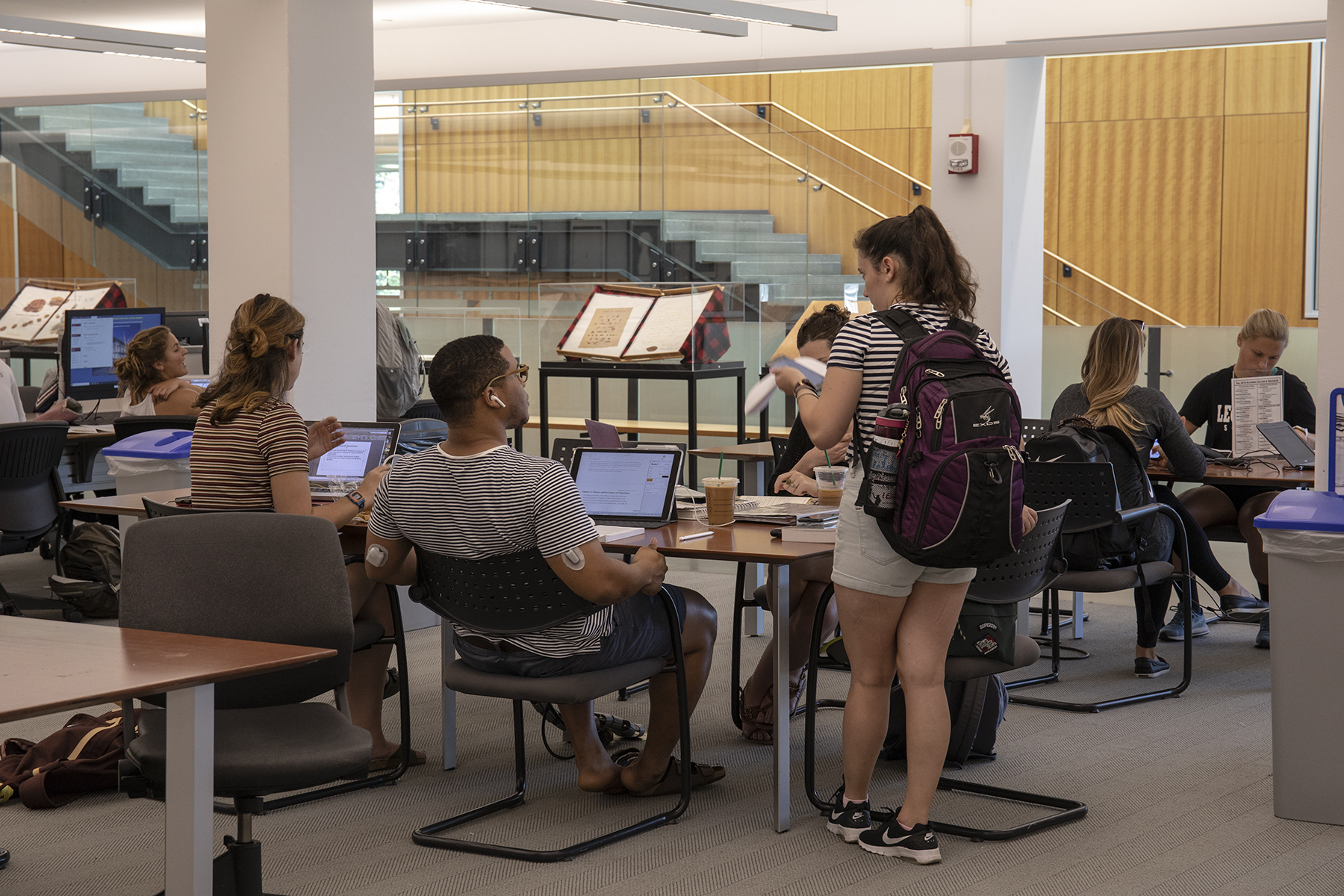 Students find themselves adjusting in many ways when they come from a starkly different culture than Lafayette’s. Photo by Elle Cox ’21

Transitioning to college life is an exciting and daunting experience for everyone, but for many Lafayette students, this transition includes the added burden of adjusting to American life and life outside of the city.

These students experienced culture shock, which happens when someone goes through a sense of bewilderment and shock when arriving into a new environment or country, with a differnt language, different social norms and more. It is, however, important to know that, although these experiences can be universal, the stories we’ve collected are not the only experiences of students from different walks of life. In order to get a sense of their experiences, The Lafayette interviewed three students on the ways in which they experienced cultural shock.

Bowen Hou ’21 is an international student from Kunming, the capital of the Yunnan province in southern China. Despite going to an international high school, where the majority of the teachers were from the United States and the United Kingdom, Hou was struck by the myriad differences from his home country.

“When I got off the plane, everything was different,” Bowen said. “Even the layout of the city, the houses and streets, was very different from my country. One of the first things I noticed was in the dorms. In my country, boys and girls live separately, and here we live on the same floor and we have gender-inclusive bathrooms. That was pretty weird for me, but I can get used to it.”

Many of the differences Bowen noticed were small, but nevertheless significant for someone unused to them. From the buffet-style dining halls to undergraduate research opportunities, there were many small changes to get used to, but fewer actual impediments in his transition.

“It’s really not that different here; we dress the same, we just speak a different language,” Bowen noted. “Language, for me, was pretty easy to get used to. There was less of a barrier than I thought. I still have to search for some vocabulary words on Urban Dictionary, though.”

One major cultural difference that Bowen noticed was censorship. Restricted access to certain content in China meant that a lot of books and news stories, both online and in libraries, were unavailable to him.

“For studying or finding materials, the media here is [freer.] We have books here that would be considered sensitive in my country,” he said.

Milena Berestko ’22 partly grew up outside of the United States, but she has been living in New York for the past three years, therefore she is not considered an international student, but said she struggles with people trying to box her into one identity.

“I’m originally from Poland, but I am from New York City. I feel proud that I spent the last three years in New York City,” she said. “If people ask me, ‘Are you an international student?’ it takes away from that experience and a lot of what I’ve gone through to get to college.”

One of the biggest culture shocks for Berestko was about identity. Growing up in Poland, then moving to New York meant that, at Lafayette, she often stood out to people, but in a different way than many international students.

“I look like a white American, but when people find out I’m not, it becomes, ‘well…who are you? Are you American or are you a Polish girl?'”

“I could not call myself Polish-American, and I do believe that I have a big part of New York inside me already,” Berestko said. “I look like a white person, but when I speak, they think, ‘Oh, she’s not from here.’ I don’t fit in as a regular white American, but I don’t fit in as a person of color either.”

In addition to identity conflicts, Berestko has also experienced the universal shock of increased responsibility and workload that accompanies matriculation.

“It is weird to have so much time that is not your time,” she said. “You use your free time, but it feels like wasted time. There’s more pressure to organize yourself.”

Julisan Street ’21, said that she experienced culture shock in many ways. From American speech, the way Americans dressed,  the foods and her identity, to not using umbrellas when it is pouring outside.

Street is from Kingston, Jamaica, and when she first arrived at the college, she struggled to learn American phrases and what they meant. She often found herself on Urban Dictionary, trying to define words that she hadn’t encountered.

As well as adjusting to the discourse, through the news Street soon learned that she thought more about her identity as a black woman in America than in Jamaica, where she didn’t really consider her racial identity as often.

Street said that the media cautions American people to be careful while walking at night in Jamaica, but she feels more at danger in walking around Easton as a black woman.

“I can’t change my race nor my genetic makeup.”

To deal with culture shock in America and the college, while Street tried to immerse herself into the culture, she “also tried to not forget her Jamaican culture.”

“I try my best to talk to people back home every single day because the more you live [in America] as somebody from a different country, and while things are constantly going on in your country, the less you feel closer to your own country,” she said. “I try to keep up with [what’s happening back home]. The more I talk to people from back home, the more I feel at home.”

“I realized I have wonderful groups of people that I know…that makes [being here] better and allows me to understand American culture even better. I’ve met people that fulfilled the stereotypes that Jamaicans have about Americans, but then [I’ve met] other people that prove that the stereotypes are not the end all be all for every single American.”

“I found it interesting to adjust to the Lafayette culture and I really appreciate it. Being a part of the Lafayette dynamic has made me realize that I’m a Jamaican but that I am also a Leopard. So that is something that I consider a part of me and something that has helped shape me [in the year that] I’ve been here,” she added.