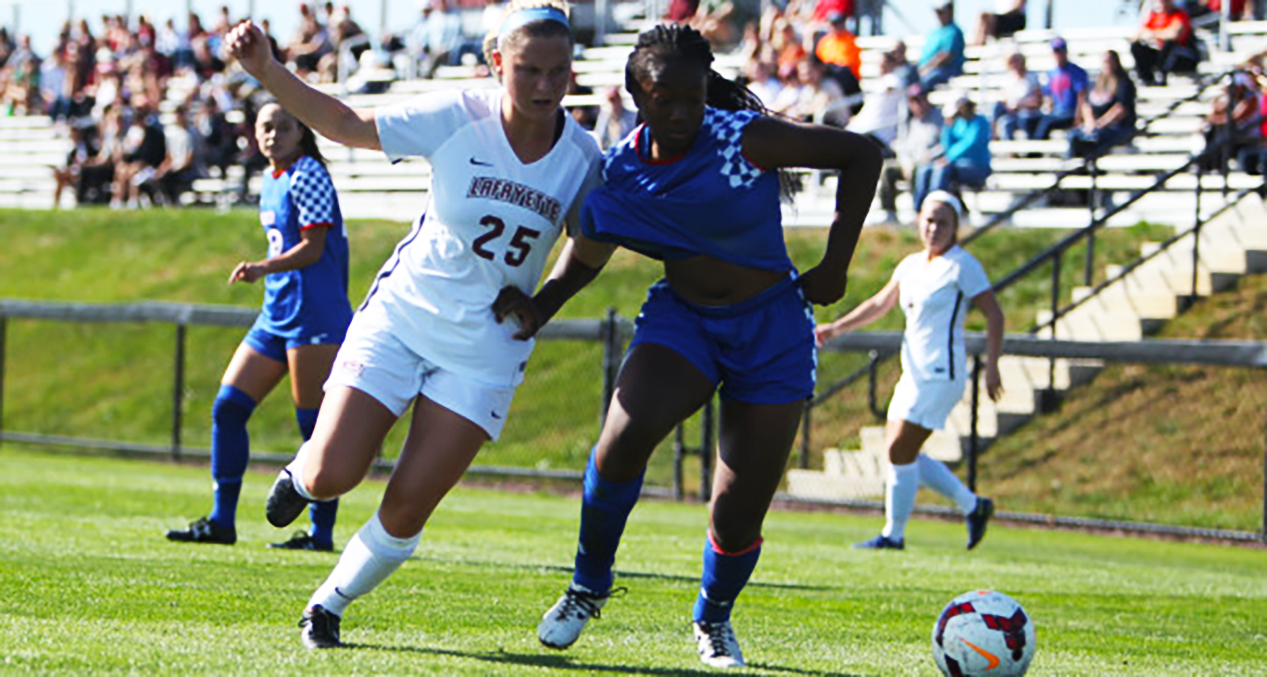 Alex Stanford earned Patriot League Offensive Player of the Week in each of the first two weeks of the season. (Photo courtesy of Athletic Communications)

This week, The Lafayette sits down with senior soccer co-captain Alex Stanford, who was named Patriot League Player of the Week for the second consecutive week.

Amy Hewlett: Your team is off to a great start (3-0). What do you attribute the early wins to?

Alex Stanford: Coming into this season, as a team we were all really excited to get started because we knew this season we were going to have the talent and ability to do very well. Our coaches have told us that there isn’t one team on our schedule that we can’t beat, so I think the anticipation and excitement for this season has given us some fire early on to get into teams and play well.

AH: You’ve scored five goals so far this season, which ties you with three others for goals scored, and you’re the only NCAA women’s soccer player in the nation to have done that in less than four games. How does your offensive success make you feel about the rest of your season?

AS: My early success definitely makes me excited for what’s to come. In preseason we talked a lot about varied production and getting more players involved in the attack and all five of my goals have been assisted by different players, which is exactly what we are going to need to continue to be successful this season.

AH: What specifically did your summer training include? What were the most beneficial parts of your season preparations?

AS: This summer I played on a u-23 pro team through my old club, Loudoun Soccer. This included practicing twice a week and playing games on the weekend. Any day that I didn’t have training I ran on my own following our team’s summer packet. Playing on the summer league team is definitely what set me up to have such a strong start. Nothing compares to actually playing the game in the off-season.

AH: You were named the Patriot League Player of the Week for the second consecutive week. How does these recognitions make you and your teammates feel?

AS: Personally, it is obviously very exciting. It makes me feel like all of my hard work and development over the last three years is paying off. As a team it is also very exciting because as a program we are finally getting the recognition that we have earned and deserve. The weekly awards are typically given to players on teams that have won, so not only is this an individual award, but also a team award.

AH: What are your goals, personal and for the team, for your final season at Lafayette?

AS: My main goal, along with the other seniors’, is to make it to the Patriot League final and to win the league.

AH: What kind of legacy do you want to leave behind for Lafayette’s Women’s Soccer program?

AS: When my time is up, I want to be remembered as someone who gave her whole self to the program, and [as] a player who left her jersey better than she found it.

AH: If you could play another sport, what would it be?

AS: If I could play any other sport it would probably be basketball. I played competitive basketball up until my sophomore year of high school when I decided to pursue college soccer.

AH: What has been the most memorable moment of your soccer career so far?

AS: The most memorable moment of my soccer career so far was beating Lehigh in the quarter finals my sophomore year. Can’t beat the feeling of beating Lehigh and it was even better that it was in the playoffs…we knocked them out.

AH: What is the most important part of your role as captain?

AS: For me, I think the most important role as captain is to lead by example. If I can back up my words with actions then my teammates will respect and trust me more, which is all I can ask for as a captain.

AH: Who is your biggest role model and why?

AS: My biggest role model is my mom. She is loved by every person she meets and has a positive impact on so many lives. She has shown me what it is like to be a successful single mother. Working a full time job and supporting my sister and [me] in all aspects of our lives. She is superwoman and I would be lucky to become half of the woman she is.

AH: What is your favorite movie, and why?

AS: My favorite movie is probably “Bridesmaids.” I can pretty much quote the entire movie and no matter how many times I watch it, it makes me laugh every time.