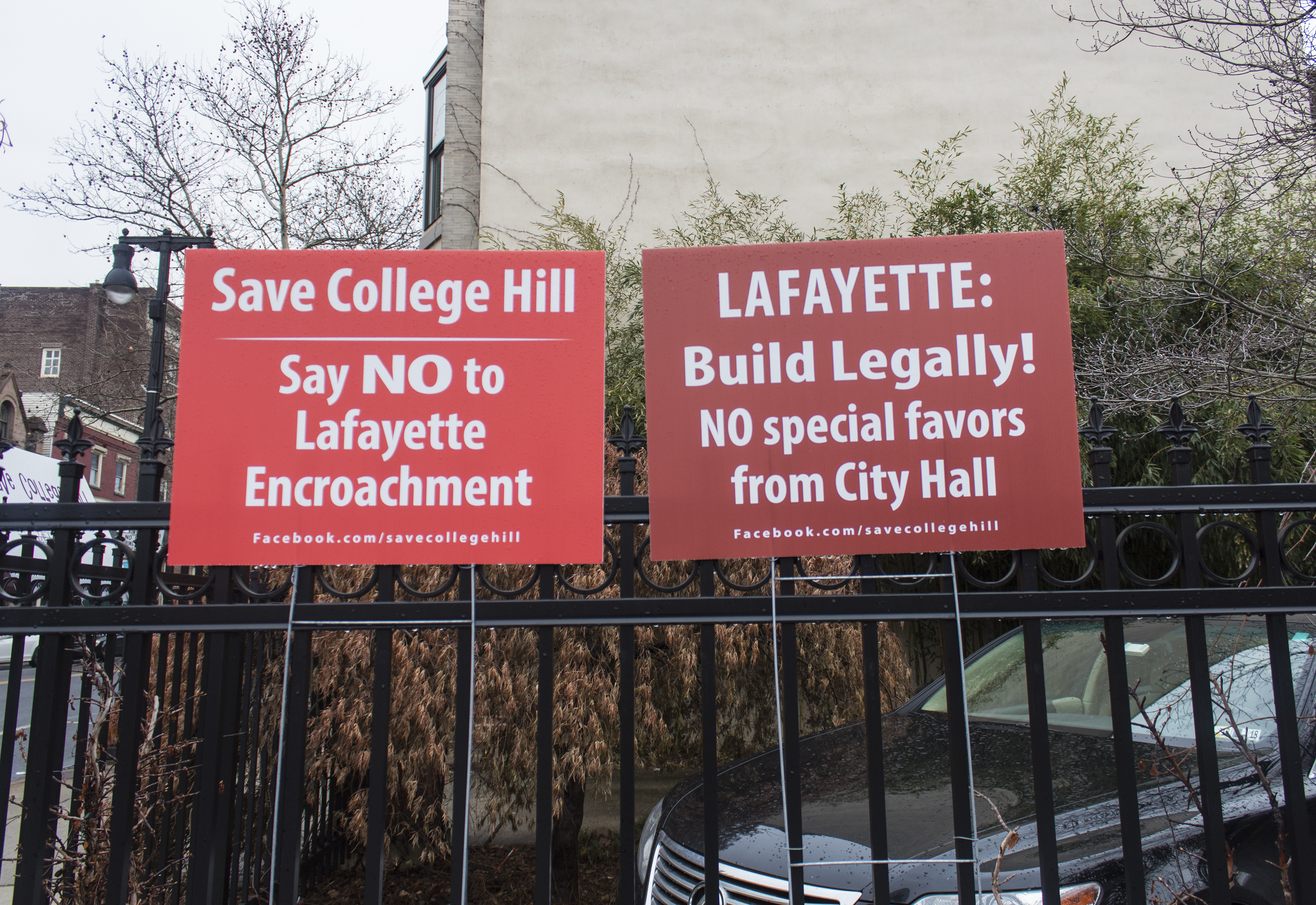 This summer, College Hill residents filed a procedural appeal against the city’s acceptance of the zoning changes (Photo by Elle Cox ’21).

The college’s expansion plans has met yet another obstacle: an ongoing lawsuit against the City Council of Easton by four College Hill residents. The construction of McCartney dorm project is the subject of the suit.

A procedural appeal lawsuit was filed against the city in Northampton County Court in early June, under the argument that the zoning ordinance changes to allow the college’s expansion project were passed illegally by the city. The lawsuit specifically argues that the Lehigh Valley Planning Commission (LVPC), a regional advisory board, should have reviewed all amendments to the zoning, according to the Morning Call.

In February, the LVPC did review the zoning ordinance changes and said the dormitories should remain as a special exception and not permitted by right. The zoning changes were amended again in early May, but city officials at the time said the amendments were so minor they did not require another presentation at the LVPC, according to the Morning Call.

Paul Felder, city planner and Lafayette professor, is one of the local residents who filed the lawsuit, along with Caron Anderson, Janis Black, and Laura Spenadel. Felder, as well as his colleagues, say they take issue with this decision by city officials.

“The individuals taking the legal action represent only a small percentage of residents upon whose behalf that action was taken,” Felder said.

Vice President of Finance and Administration Roger Demareski said he believes that the lawsuit will be resolved in the next few months and the college plans on breaking ground on McCartney Street next summer to open for fall 2020. As a result, Demareski added the college may look to extend the approved time for the March Hall temporary dormitory.

While the college has to wait until the procedural appeal is resolved to begin the McCartney Dorm project, Demareski said the appeal will allow a year for the college to come up finalized designs and apply for other approvals with the city of Easton.

“There’s a lot that still has to happen before we can actually put a shovel in the ground. We agreed on this timeline and I’m confident we’ll break ground in July next year,” Demareski added.

Felder said he and others involved in the lawsuit are not entirely opposed to the expansion itself, just the way it’s being conducted.

Currently, according to the Morning Call, the college is paying $860,000 per year, solely in real-estate taxes, making the college the single largest tax-paying entity within Easton. The college has agreed to pay an additional $240,000 per year if their plans for the residence building on McCartney Street are approved.

“We still have amazing support from city council and from the mayor, and I think you’ve even started to see from the community a lot of the signs have come down, you know the ‘Save College Hill’ signs,” Demareski said.

“I think there are folks who understand why the college needs to expand. A stronger Lafayette is very good for the city of Easton… It’s a process but we’re committed to seeing it through,” Demareski added.

Attorney James Preston, the lawyer representing the residents, could not be reached for comment.

I think it’s time for Paul to start looking for a new job. Stop biting the hand that feeds. Remember it’s college hill, not Felder hill.