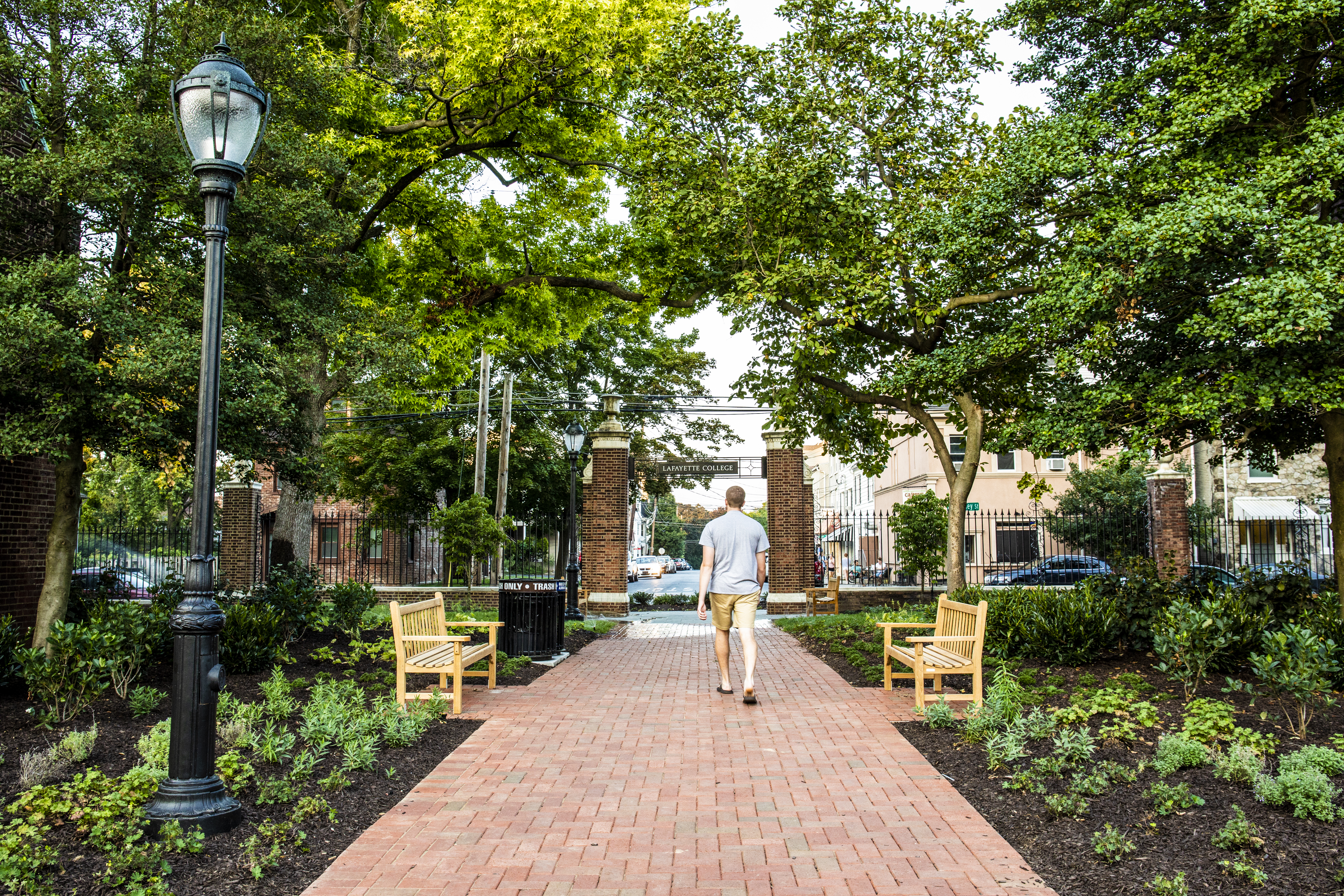 This summer the college renovated the space behind Hogg Hall to provide a courtyard area for students. (Photo by Elle Cox ’21)

Upon returning to campus, students were met with several changes including landscaping and renovations, new safety precautions, a new login system for Lafayette accounts, and other changes in policies and protocols.

Hogg Hall and its surrounding area experienced one of the biggest renovations of this summer. The stone on the outside of the building was washed and restored, along with the statue of the Marquis de Lafayette behind it. The surrounding landscaping was also tamed back.

The project behind Hogg Hall, which was funded completely by three donors, reworked the sidewalks and created a small courtyard area. The Marquis de Lafayette statue, which used to stand by itself behind Hogg, was moved closer to the building and is now surrounded by tables and chairs placed around the statue. A wall will soon be installed that will feature a historical quote next to the statue.

“Development did a great job aligning the three donors…I think Hogg came out fantastic from what it was,” Roger Demareski, Vice President of Finance and Administration said. “It almost extended the quad,” he added.

Students such as Tali Dressler ’19 have had positive reactions to the new space on campus.

“I think the new landscaping really enhances the beauty of our campus and it’s great for the students, since everyone loves sitting outside and around the quad during these beautiful summer and fall days,” Dressler said.

Students’ safety and accessibility was also a main concern of this summer, with new state-funded pedestrian safety projects and other ADA-accesibility projects on campus.

“We closed off the loading dock [between KDR and The Kirby House] to ensure no one got hurt…we created an ADA accessible path from the Markle Deck to the Williams Center for the Arts… we added two ADA ramps at the McCartney Street and March Street intersection so pedestrians would be in the road for less time,” Demareski said. Pedestrian safety measures were also added along Sullivan Lane.

The ADA ramps on McCartney Street were the second phase of the three-part state-funded pedestrian safety project. The third phase involves changes to the intersection at the bottom of the stairs on N. 3rd Street, expected to be completed next summer.

The Rockwell Integrated Science Center construction is still underway as well, and, according to Demareski, is on schedule.

“That building will be enclosed before the winter and will open right on time…for the Fall semester of 2020,” said Demareski.

Metzgar field is also getting new pedestrian safety features, while plans for the future of Kunkel Hall are in the works.

“We are committed to renovating [Kunkel],” Demareski said.

In addition to the physical changes to campus came a technological one, with the college switching the login system from a one to two-step process. This now requires students and faculty members with Lafayette accounts to go through an additional measure of security to access their accounts, which is done through the Duo Mobile App that has to be installed on individuals’ smartphones.

“This change was made so attackers can’t access protected systems with only your NetID. It also prevents online password guessing attacks from succeeding. Two-step login helps keep your NetID, your personal information, and the College’s digital assets safe,” John O’Keefe, Vice president and Chief Information Officer for ITS said.

Dawit Gebeta ’20, who works in the Tech Lounge said he feels the new security system is beneficial, but also recognizes that many students find it annoying and frustrating at times.

“I think its really good in terms of protecting peoples’ privacy and security, but people may not be as adaptive [to the change],” Gebeta said.

For students who don’t have their devices on them when trying to log-in to computers, or have devices that are not compatible with the app, O’Keefe offered a few suggestions.

“Students can have backup passcodes sent to them via SMS text message. These can be used when you don’t have access to any of your devices. The system can also call back to any cell phone, even if the Duo Mobile App is not an option,” O’Keefe said. “Another option beside a cell phone is to use a U2F token like a YubiKey, which can be bought on Amazon,” he added.

In addition to the log-in system changes, the mailroom has also changed protocol for package pickup to increase security and accessibility. Rather than the old way of picking up a piece of paper from their P.O. box to show their packages have been delivered, students now have to only show an email from the post office proving this.

“We are trying to save money and the environment by making it an email-only system,” said Bob Walsh, Lafayette College’s postmaster.

Another change is that student I.D’s are no longer accepted as a valid form of identification to use to pick up packages.

“We just found out that student I.D’s are not considered a legal document so now students need to bring in either their license or passport to pick up their packages,” Walsh said. This change comes after the college officially began allowing students to use their preferred names on I.D’s, which aren’t necessarily their legal names.

“I went to pick up my package and didn’t know this rule so I didn’t have my license on me,” Grace Wilgucki ‘19 said. “It is just very inconvenient because I don’t carry my license with me everyday, but I do carry my school ID for meals and all other school-related activities.”