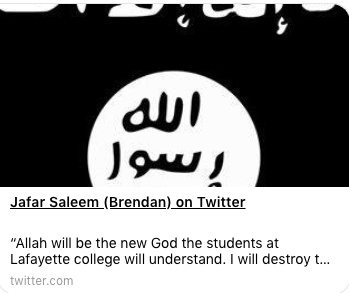 When Dean of Students Chris Hunt heard of the bomb threat made against Lafayette on May 5, he decided to head to campus. Thinking mostly out of concern for students, he, Chaplain Alex Hendrickson and Director of Intercultural Development Lilliana Madrid made rounds to some campus buildings. When they arrived at the library, it seemed closed for the night. They soon discovered that students had essentially locked themselves down within the library, with the lights out and virtually everyone hidden. They discovered about two dozen students hidden in a bathroom, he said, but it was nearly silent.

The campus community was rocked by the night’s events, and many students were in fear for several hours that night, but the threat was ultimately deemed not credible by law enforcement. The culprit or culprits remain not publicly known. The investigation led by the FBI assisted by Lafayette Public Safety and Easton Police is still ongoing, according to Director of Public Safety Jeff Troxell.

“It’s still an active investigation, the FBI is the lead agency on that,” Troxell said. While there is no timeline for the investigation, Public Safety has had meetings and phone calls with the FBI, who also came to campus this summer for further investigation into the incident.

At the end of last semester, the Lafayette campus received online threats from the now-suspended account @BdanJafarSaleem and in a post on the website Pastebin, claiming to have pipe bombs and other devices around campus in order “to inflict the utmost damage possible.” After a long night of fear and waiting, the campus was reassured the threat was not credible and students resumed studying for finals.

That night of confusion and waiting brought with it concerns over how the college communicated and generally how they communicate in these sorts of situations.

Earlier this August, Public Safety sent out an email to the campus community acknowledging these concerns.

The email suggested several steps for students to take now, such as signing up for the emergency communications system, now named Leopard Alerts, as well as what to do in the case of an emergency.

“Like any other emergency we have on campus…we do an analysis of our response and one of the things we look at in any response to an emergency is the communication piece. We were planning on having a promotional thing in regards to safety anyways, so this sort of worked in to that,” Troxell said.

“We reviewed how we communicated. I know there were some comments and concerns about not [being] fast enough. But at the time, and with the information we had, I believe it was the appropriate call…the key to us initially on any call is confirmation of what’s being reported to us,” Troxell added.

Diorio, who came to campus the night of the threats and heard from several students “who were on edge,” also looked into the college communications protocol this summer.

“We spoke with the [resident advisors] earlier this year, we learn from everything we do and one of the things we learned is that communication wasn’t good…We’ve spent the summer on that, working on ways that we communicate with students,” Diorio said.

Specifically, Diorio said the college has made an increased effort to encourage students to sign up for Leopard Alerts.

In addition to Leopard Alerts, Diorio said that students should remember if something really urgent is going on, “we will set off those exterior sirens, and you will know, ‘okay, something’s going on.’ There are two [exterior sirens] on campus… they test them during the summer and they test them during the school year…you can tell they’re going off but you can’t always hear what they’re saying. It’ll say, ‘check your email,’ [or something similar].” Those sirens have been in place for about two years, Diorio said.

Concerns about communication from the college were not just limited to students and parents. Several College Hill residents expressed concern at the lack of information they received during that night, according to Lehigh Valley Live.

Troxell said there is a communication piece that exists between the college and the city in which Public Safety works closely with Easton Police who then relay information to Easton residents through their own alert system called Nixle. However, Mayor Sal Panto said in Lehigh Valley Live that the city’s Nixle alert account is for “true emergencies,” and that the threats made in May were “never validated as a true emergency.”